Definition: Antennas are considered to be the fundamental part of a wireless communication system. An Antenna is a device that changes the RF signal into an equivalent electromagnetic wave. So that it can be transmitted into free space.

As we know that antennas are required at the time of both transmission and reception. Thus radio wave communication needs transmitting as well as receiving antennas.

This electrical signal is then provided to the transmission line. Thus we can say that it serves the role of a transitional element between free space and transmission line (guiding device).

In simple words, antennas are transducers that change RF electrical signal into an electromagnetic wave of similar frequency. The figure below illustrates the transmission and reception of radio waves in free space:

The electromagnetic wave emitted from antennas propagate in free space with speed of light (i.e., 3 * 108 m/s).

We have already discussed that antennas are considered to be the basic building block of a wireless communication system. As signal in free space propagates in the form of an electromagnetic wave then it requires some transmitting as well as receiving ends. 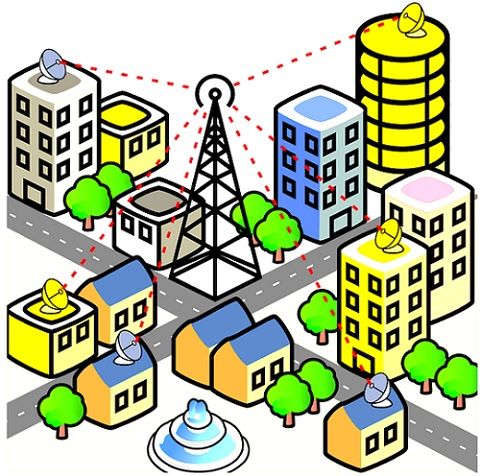 So, an antenna allows the propagation of electromagnetic waves from one end to another, in the form of EMW without the need for a wiring system. It acts as a transducer that converts RF signal into EM wave at the transmitter and EM wave back to an electrical signal at the receiver.

Antennas do so by producing electric and magnetic field from the applied signal and combinedly the two fields form an electromagnetic wave. As the two fields show perpendicularity with respect to each other. Thus

1. Transducer: It acts as a transducer as it converts one form of energy into a different form.

As at the transmitting end, an electrical signal is transformed into a radio wave and receiving end changes radio waves back to electrical form.

This simply shows that the maximal amount of transmitted power is transferred at the load.

3. Radiator and Sensor: The transmitting and receiving antennas act as radiators and sensors of electromagnetic waves respectively.

4. Coupler: Another important feature possessed by the antennas is coupling. It acts as a coupler between the device that generates the RF signal and free space or free space and transmission lines.

Mechanism of Radiation in Antenna

An antenna is generally considered as a combination of various short conductors. A transmitting antenna when excited with RF electrical signal, then the charges present in the conductor start balanced motion.

This causes oscillations to build up inside antenna. These frequent changes in the charges lead to the generation of the electric and magnetic fields.

More simply, we can understand this as a general nature of moving charges.

When an electric current is provided to the conductor then the charges present in the conductors undergo back and forth movement. This leads to the generation of the electric and magnetic field that resultantly produces electromagnetic radiation in the form of radio waves.

And in this way, the disturbances from the antenna is spread into free space.

This electromagnetic radiation propagates with the speed of light and is received by the antenna present at the receiving end.

Now when the EM wave reaches the receiving antenna, then it sets up motion in the charges present in the conductor. Thus the moving charges generate current inside the conductor.

Hence the RF signal originally provided to the transmitting antenna is achieved by the receiving antenna and further given to the guided media.

The characteristics are as follows:

So, it is measured in terms of field strength. The field strength specifies the achieved radiation at a particular point at a certain distance from the antenna.

Thus it can be determined by the ratio of voltages between the two points on electric lines of force and the distance of separation between these two points. Thus its unit is volt per meter.

The radiation pattern shows significant importance as it helps in determining the radiated energy in space.

Radiation intensity is given as the power per unit solid angle. Thus its unit is watts/ steradian and is written as W/ sr.

If theoretically an isotropic antenna is considered, then the energy radiated by it must spread equally in various directions.

Thus the average power will be given as:

The directive gain of the antenna is defined in terms of the ratio of power density to the power radiated by the antenna on an average.

So, the efficiency is defined as the ratio of power radiated by the antenna to the actually applied input power to the antenna.

On considering the losses associated with the antenna-

The overall input power will be the sum of radiated power and power loss.

Thus the efficiency will be given as:

Hence the power gain is given as the power radiated by the antenna in a specific direction to the originally applied input power to the antenna.