Definition:  A Phototransistor is a device that has the ability to detect the level of the incident radiation and accordingly change the flow of electric current between emitter and collector terminal. It is a 3-layer semiconductor device that consists of a light sensitive base region. It is basically a transistor whose action depends on the application of light. Hence named phototransistor.

This means that as in normal BJT, base current is used to drive the circuit, however, in phototransistor light energy falling on the base region acts as the overall input of the device.

A phototransistor is said to exhibit the combined operation of the photodiode as well as a normal transistor. It operates on the principle of Photoelectric effect. As it changes light signal incidenting on its surface into its electrical equivalent form. And the transistor action permits it to perform amplification of the current flowing through it.

As we have already discussed that a phototransistor is nothing but a normal transistor whose action depends on the incident radiation falling at its base. At the time of constructing the phototransistor, the base and collector region is provided with a larger area in comparison to a normal BJT.

The figure below represents the constructional structure of an NPN Phototransistor:

Here, as we can see that the light is majorly allowed to incident at the base collector junction. Initially, phototransistors were fabricated from silicon or germanium as their basic material that resultantly provides homojunction structure. However, in recent times, these are constructed using materials likes gallium or arsenide. Thereby, providing a heterojunction structure. This is so because these structures exhibit large conversion efficiency. This implies they are more capable of changing light energy into electrical energy as compared to homojunction transistors.

Phototransistors are mainly enclosed in a metallic case that consists of the lens at the top in order to gather the incident radiation.

The figure below represents the symbolic representation of a Phototransistor: 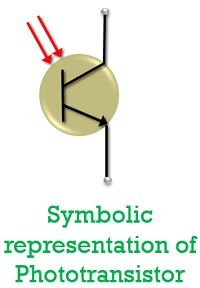 Here, the symbolic representation is almost similar to a normal BJT but the only variation is the presence of two inward arrows at the base region that shows the incident of light radiation.

The operation of a phototransistor depends on the intensity of radiation falling at its base region. Its working is almost similar to a normal transistor, however; the variation lies in the input current that drives the circuit. And in the case of a phototransistor, the incident light generates driving current.

The figure below represents the biasing arrangement of a phototransistor: 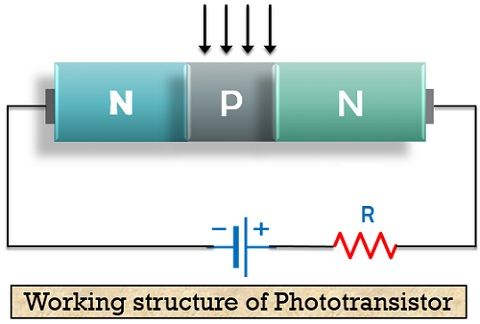 In the circuit arrangement, we can clearly see that the base region is kept unconnected with the external supply voltage and is used as the region for radiation incidence. Only the collector region is connected to the positive side of the supply provided along with emitter which is connected to the negative side. However, the output is taken at the emitter terminal of the transistor.

When no any light is allowed to incident at the base region of the transistor, the due to temperature variation, movement of minority carriers across the junction generates a very small current through the transistor which is reverse saturation current basically termed as dark current. Here, the base current IB is majorly 0. Here, in this case, the output current will be less as compared to supply provided. But, when a certain amount of light energy is allowed to fall at the base of the transistor, then electron and hole pair gets generated. The applied electric field causes the electrons to move into the emitter region, thereby generating large electric current.

The figure below represents the circuit of a phototransistor: 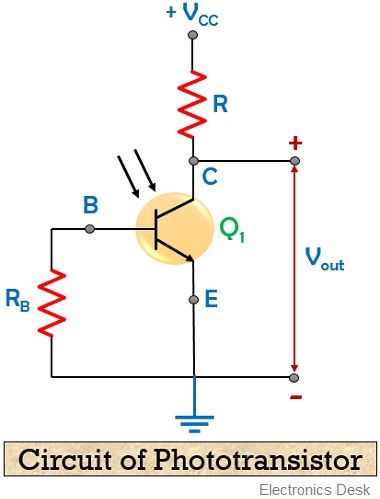 As the intensity of the light falling at the base region is increased, the current through the device also increases. Here, the generated photocurrent majorly depends on the illumination provided to the base.

The figure below represents the characteristics curve of phototransistor: 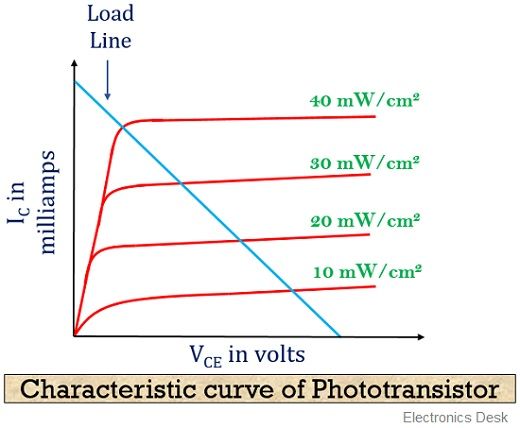 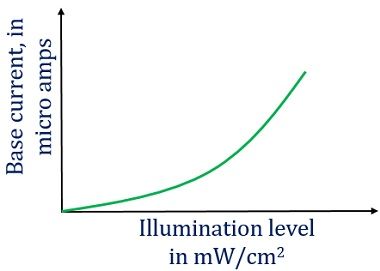 The applications of phototransistors are as follows:

Though phototransistors are highly sensitive devices, the device is somewhat slow. This clearly means that with the increased sensitivity a major drawback is concerned regarding its on and off time.