Let’s see the contents to be discussed under this article and then we will move further in order to understand other major differences between the two.

NPN is the abbreviation used for Negative-Positive-Negative transistor. It is a 3-layer device namely emitter, base and collector.

The figure below represents the NPN transistor with biasing arrangement: 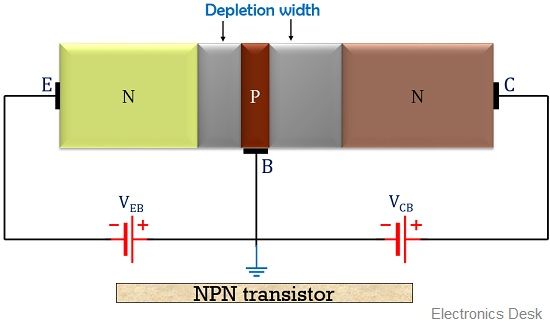 The applied forward biased voltage at the emitter-base junction allows the electrons to move into the base region after overcoming the barrier potential at the EB junction.

As the negative terminal of the battery connected to the n region applies a repulsive force to the electrons present in the n region. And on reaching the base region only a few electrons get combined with the holes present in that region. Rest move towards the collector region, and as we can see clearly in the above figure, that collector region is connected with the positive terminal of the battery. Hence, this positive potential attracts electrons from the base region. Thus, in this way current flows from collector to emitter i.e., in the reverse direction of the movement of electrons.

Among the 3 regions, the collector region has a larger area but it is moderately doped. While the emitter region is the second-largest but is highly doped. On the other side, the base region has the smallest area and is lightly doped.

PNP is the abbreviation used for the positive-negative-positive transistor. It also consists of an emitter, base and collector region.

The figure below represents the PNP transistor with biasing arrangement: 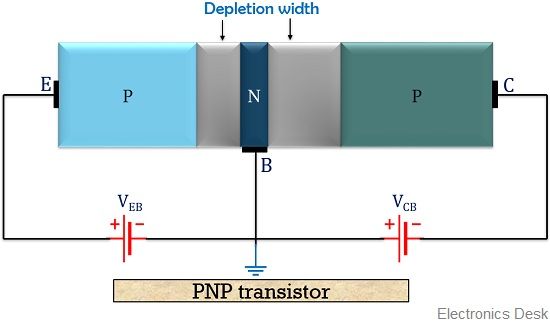 In PNP transistor, n region is sandwiched between two p regions. Here, holes acts as majority carriers and electrons are the minority carriers.

As the forward voltage is provided at the emitter-base junction of the transistor. Thus, the positive potential of the battery applies repulsion to the holes present in the p region. These holes on experiencing repulsive force move towards the lightly doped base region. While the base is lightly doped hence very small amount of moving holes gets combined with the electrons of the base region. Rest drift towards the collector. Also, the collector region is connected to the negative terminal of the battery, hence the negative terminal attracts holes drifting towards the collector region. Thus, in this way, current flows from emitter to collector i.e., in the direction of the movement of holes.

Here also, among the 3 regions, the emitter is highly doped but has moderate in size. While the collector is doped at a moderate level but it has the greatest size among all the regions.

So, from the above discussion, we can conclude that both NPN and PNP are the two configurations of BJT and responsible for current amplification and switching. These are current controlled devices. But, the presence of different majority carriers shows variation in their working principle.