Optical storage devices possess greater memory capacity than magnetic storage. The reason for the same is that the use of laser beams in optical storage offers precise controlling and focussing in comparison to tiny magnetic heads. This facilitates condensing larger data into the smaller regions.

The optical memory was developed by Philips and Sony in the year 1982 in the 4th generation of computers. This memory technology allows the data or information to get stored in a spiral-shaped track.

We have already discussed in the beginning that optical storage devices permit the data to read/ write operation to take place through laser beams. In computing systems, before the arrival of optical storage, magnetic storage like HDD (i.e., Hard Disk Drive) and SSD (i.e., Solid-State Drive) were used for the purpose of storing data. However, optical devices have replaced HDDs and SSDs because of their more durable nature as well as showcasing less vulnerability to environmental conditions.

The development of optical storage contributed mainly to the use of multimedia in computers as it finds applications in multimedia external devices such as video recorders, DAT recorders, etc.

Mainly the optical memory can be classified into three categories:

The basic principle of operation of optical storage is based on laser beam as the intensity of reflected light from the disk acts as a source of information. There is a substrate made up of polycarbonate material over which holes (called pits of depth 0.12 μm) are present that represent the coded data. The region between two consecutive pits is called land. The figure given below shows the schematic representation of substrate with lands and pits:

There is a cover of a thin reflective layer over the substrate and the laser beam is focused on that reflective layer. After getting reflected, the beam is weakly scattered (i.e., is of weak intensity) at the pits while strongly reflected at the lands with high intensity. In the figure shown below one can clearly see that there is a horizontal line representing the threshold value. 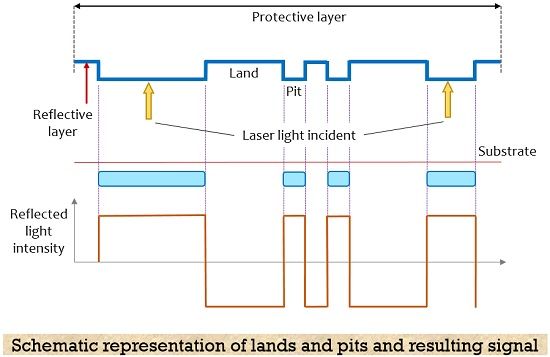 We have mentioned recently that the intensity of reflected light is different at pits and lands. Thus, the sequential arrangement of pits and lands on the substrate provides a sequence of digital data in the form of 0s and 1s.

This means that here all the data sequence is stored in a single track (which actually exists in spiral form) and the continuous stream of data is advantageous for storing audio and video files. The optical disk contains 1.66 data bits per μm thus, the data density is around 1,000,000 bits per mm2 this signifies that there are approximately 16,000 tracks per inch. Hence, suits the long-term storage of data.

It is to be noted here that the laser light source is placed at around 1 mm of the distance from the surface of the disk. This leads to a reduction in chances of friction as well as more lifespan of the disk.

The optical memory allows the read and write operation to take place by the use of a laser beam. The various optical media are CDs, DVDs, Blu-ray disks, etc.

It is abbreviated as CD and is the earliest form of commercial optical storage that came into existence after the idea of optical storage was introduced. The diameter of CD is 12 cm. The track present within the CD is spiral in shape and there are around 20,000 windings. We have already discussed the principle by which information gets stored within the substrate. It is inexpensive, portable, and offers storage space of around 700 Mb.

A CD is produced using a digital tape master. In this case, the stored information within the tape modulates the laser beam that is focussed towards the spiral path on the surface of the disk. Basically, over the glass surface, there is a coating of photosensitive material and when laser beam falls on that surface then some particular regions on the material get dissolved thereby giving rise to pits at those specific locations. Each individual disk is provided a stream of vaporized aluminium that acts as a reflective layer and afterward an acrylic layer is present over it in order to make a protective layer.

A compact disk operates in a way that when the disc is placed into a disk tray of a CD player then the track of the disc is scanned by a laser beam of low intensity. A constant scanning rate is maintained by rotating the disc between 200 and 500 revolutions per minute. After striking the land region of the CD, the light beam gets reflected thereby forming an electrical pulse.
However, after striking the pit region, no electric pulse is produced. And we have already discussed in the above section that the pit region on the track will correspond to 1 of binary logic and the land region will correspond to 0 of the binary logic.

It is mainly classified as:

The abbreviation for it is DVD and sometimes also known as a digital versatile disk. This is another type of optical disk that stores data and multimedia files. It is the second type of optical disc that was introduced after compact disk. Though it appears like CD, it can store 15 times more data than the data stored by CD. The storage space offered by a DVD is nearly around 4.7 GB to 17 GB.

DVD uses special data compression technology that allows both sides of the disk to store data in a condensed manner. In the case of DVD also a laser beam is used for the purpose of reading and writing the data onto the disc. Basically, the same technique of formation of pits and lands on spiral tracks is used for read/write operation. The main reason for the greater storage capacity of DVDs is their ability to resolve smaller pits in closely spaced tracks and this can be done because the DVD laser emits red light of a shorter wavelength (635 nm to 650 nm).

DVDs find applications in storing movies, software programs, etc. that are very large to get stored within the CD. Similar to CD, it is also of 3 major types namely,

It is known to be the third generation of compact disk technology as it came after the introduction of CDs and DVDs. It is regarded as the latest optical storage medium that stores high-definition (HD) audio and video. It has a storage capacity of around 128 GB.
Unlike CD and DVD that use a red laser beam, the blu-ray disks use a blue-violet laser that emits a wavelength of 405 nm for read/ write operation. Due to the shorter wavelength of the laser, the tracks on the disk can be wounded more tightly than the high wavelength beam used by CDs and DVDs. Thus, it offers high storage capacity hence can store more data than both CDs and DVDs.

It is generally used for recording, and rewriting high-definition videos and can store huge amounts of data or information. Some of the features offered by this type of optical storage are as follows:

Blu-ray disk association came up with the idea of blu-ray disk and it was combinedly developed by a group of personal computers and consumer electronics companies.

This is all about optical storage devices.