Intel 8254 is a programmable interval timer designed by intel is a programmable external timer device built with an aim to resolve the time control issues that occur in between various processes occurring within the microprocessor. In order to communicate with the processor, it has a total of 8 data lines.

There are overall 24 pin signals in which it operates and the power supply provided to it is +5V.

We know that multiple operations take place within the processor and thus it is necessary that timing between the various operations must be managed properly. When time-based actions occur within the system then for proper controlling of the timing of the operations, in general, there are two methods. The two methods are as follows:

Intel 8254 is an external timer that maintains the timing of the processor operations. It is known to be an advancement of 8253. The Intel 8254 has three counters that operate independently. Each counter is of 16-bit value and can handle clock input up to 10 MHz.

It is known to be a general-purpose, multi-timing element that forms an array of I/O ports in system software. Through this accurate timing, delays can be obtained under software controlling as once delay tenure has been completed then 8254 interrupts the CPU.

The figure down below shows the functional block diagram of 8254 Timer: 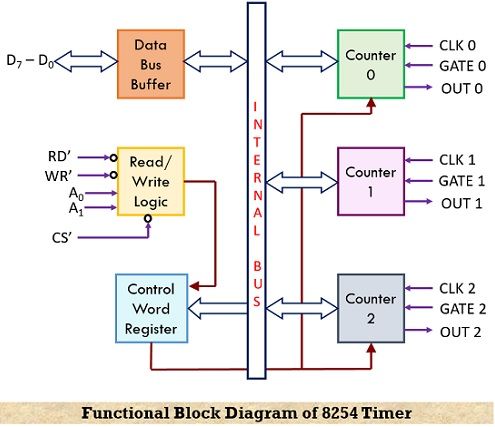 We have already discussed in the beginning that it consists of a total of 3 counters of 16-bit each and adequate programming is performed so that each one operates properly in one of the six possible modes. It has 2 inputs namely clock and gate while 1 output i.e., counter. The counter operates in a way that initially a count value is stored in the count register and at this time gate signal will be high and input is provided through clock input. After each cycle of the clock input, the counter decrements the value by 1, and output is obtained according to the mode of operation.

Here overall 8 data lines are there through which 8254 communicates with the processor. Through the data bus buffer, registers store the control words and count values. The read and write operations are performed through control signals RD’ and WR’. Out of the four internal devices i.e., the three counters and a control register, anyone is selected using address lines A0 and A1.

It is to be noted here that there is another timer called Intel 8253 which offers a clock frequency of 2.6 MHz. Thus is regarded as a low clock version of 8254. Both of these function in a similar manner however, the only difference exists in their operating clock frequency.

At the time of programming the timer it is necessary that each individual counter of 8254 is to be programmed separately using control word and count value.

The figure below shows the format of the control word: 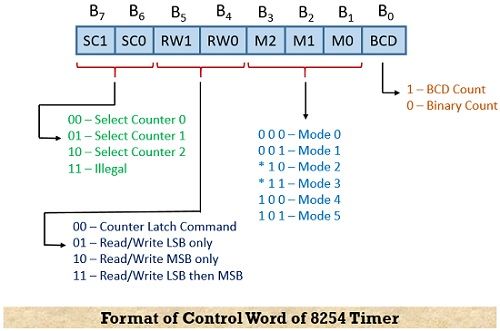 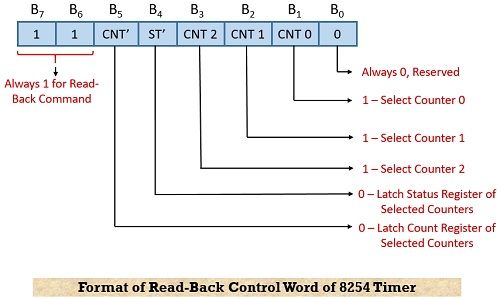 Below is shown the format of the status register of each counter:

The programmed status of the counter is judged by the status word of the counter and through this one can also check whether the count value has become zero or not.

The figure here shows the representation of 24 pins IC packed in DIP: 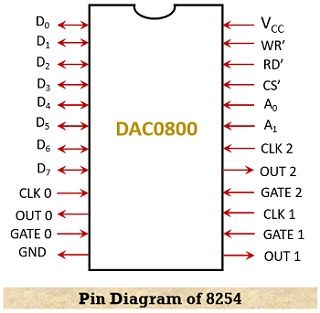 A0 and A1 are the address lines by which selection of one of the three counters or the control word register is done for the read/write operation to take place.

WR’ represents the write control pin which is kept at a low signal during the CPU write operations. RD’ is for read control and is low at the time when the CPU performs the read operation. Another crucial pin is the chip select denoted by CS’ and whenever it is low then the timer responds to the read and write signals otherwise such signals are ignored.