Definition: A PIN diode is an advancement of normal PN junction diode. It is a 3-layer device in which an intrinsic layer i.e., undoped semiconductor is sandwiched between P and N regions. Thus, making it a PIN diode.

The presence of intrinsic region exhibits high resistance property. Due to this, the magnitude of the electric field also becomes large. This resultantly increases the electron and hole pair generation in the region. Hence, it allows the operation of the weak input signal.

It is a type of photodetector that has the ability to change light energy into its electrical form due to the presence of intrinsic region. Along with providing high resistance a PIN diode also possesses a lower value of capacitance. This is so because we know,

The figure below represents the symbol of PIN diode:

The figure below represents the constructional overview of PIN diode: 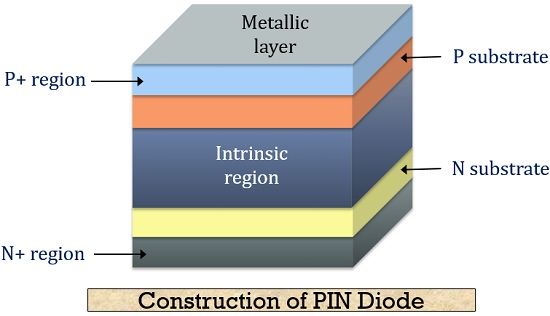 A PIN diode is formed by two methods, i.e., either by planar structure or mesa structure.

In case of the mesa structure, the layers of semiconductor which are previously doped are developed (grown) on the intrinsic region. Thereby generating a PIN diode.

In the case of planar structure, a narrow (thin) epitaxial layer is imposed on the intrinsic region in order to form a P+ region. Similarly, N+ region is also created on another side of the substrate. The intrinsic region offers very high resistivity of the order of 0.1 Ω-m.

A PIN diode is almost similar to a normal PN junction diode however the only variation is the presence of intrinsic region. This region is nothing but serves as the depletion region between P and N regions.

When no any external potential is provided to the diode. The carriers diffuse across the junction because of the concentration gradient. Thus, forming a depletion region at NI junction. However, the thickness is greater on the i region as compared to n region. This is so because the doping level of N region is very much higher than I region. As we already assume that the intrinsic region is undoped semiconductor material.

In case a forward voltage is provided to the diode, the charge carriers from p and n region are injected into the intrinsic region. This is so because applied forward potential reduces the depletion width. Due to this, the resistance offered by the device in no biased condition starts decreasing because of forward biasing. So, as the forward voltage is increased, the greater number of charge carriers gets injected into the intrinsic region.

Thereby, producing a large current through the device and resultantly decreasing the resistance. Hence, it is said that in a forward biased condition PIN diode behaves as a variable resistance device.

Now, as the reverse bias voltage is applied to the device. The depletion width starts increasing. As the reverse voltage is increased, the width of the depletion region increases as far as whole mobile carriers swept away from the intrinsic region. This particular voltage is known as swept out voltage. Usually, its value is -2V.

The device functions as a capacitor in a reverse biased condition. Here P and N region serve as the two parallel plates of the capacitor. In case of high reverse bias, a thin depletion region is noticed in the p region.

PIN diode possesses a faster response time. Due to this, these are widely used in microwave applications.