Definition: LED is a PN junction diode, that emits light when a certain potential is provided to the diode. LED is the short form for Light Emitting Diode and is a forward-biased device. This means it operates only when a forward voltage is applied to it.

It is a semiconductor device whose operating principle is electro-luminance. By which LED changes electrical energy into its light equivalent.

The symbolic representation of LED is represented below:

As we can see in the above figure that it shows a slight variation in the symbol from an ordinary diode. This variation is nothing but the 2 outward arrows that shows the emission of radiation through the device.

LED is usually formed by semiconductor material such as gallium arsenide(GaAs), gallium arsenide phosphide(GaAsP) or Gallium Phosphide(GaP). The figure below represents the basic construction of light emitting diode: 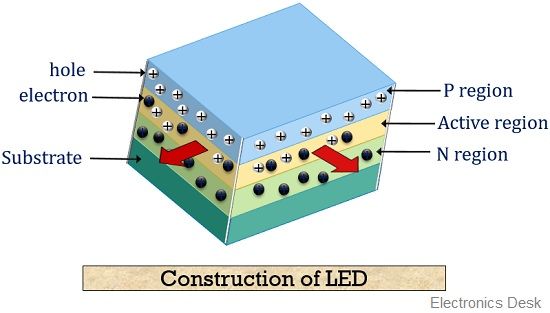 Here, we can see that a p-type semiconductor is merged with an n-type semiconductor material. As the recombination of electrons and holes takes place in P region. Thus, p region is placed above the N region. But, there is some slight difference in its construction than the ordinary diode. The junction region of the diode is enclosed in an epoxy resin of transparent plastic material. And the shape of this shell is hemispherical. 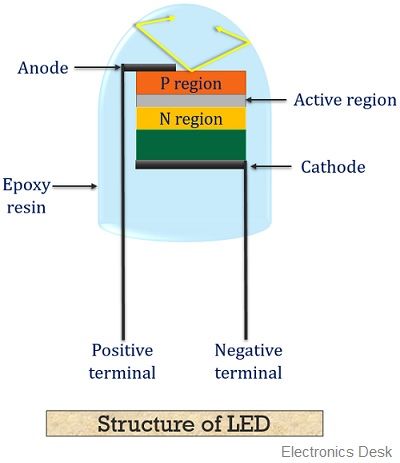 Also, the light emitted by the junction is not that much visible radiation. Hence, the hemispherical shell is used to have sufficient reflection from its surface towards the top of the device i.e., p region. This is the reason to have the brightest light at the top surface of the LED. To increase the surface area for the emitted radiation metal anode connections are also provided to the top of the p region. A film of gold is placed at the lowest end of the structure that gives a cathode connection to the whole arrangement. The gold film helps to reflect the light that somehow reached the bottom surface of the LED. This resultantly increases the efficiency of the device.

It is noteworthy that the shape of epoxy resin is not necessarily hemispherical. Sometimes it may in the form of a rectangle or cylinder.

In LED, the p and n regions are forward biased. It operates like any other forward biased junction diode. But the material from which it is composed differentiates it from the ordinary one. 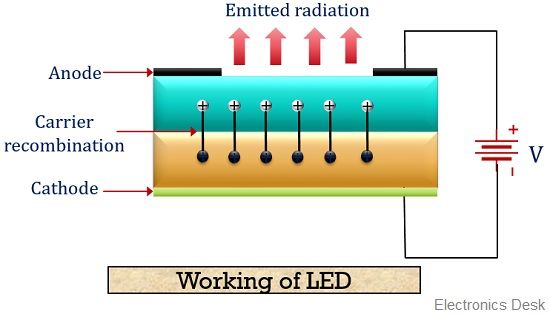 When a forward voltage is applied to the PN junction diode. Then, the electrons start diffusing into the p region by experiencing repulsion from the battery. So, the electrons move from the conduction band to the valence band in order to combine with the holes. As we know, the conduction band is the higher energy level and valence band is the lower energy level. Hence, during this recombination, some energy is emitted by the electrons.

LED is not operated in reverse biased mode as it cannot tolerate reverse bias voltage and can lead to its destruction.

As the device shows current dependency, which means when certain current flows through it, then only radiation emission is possible. Also, the intensity of light emitted by the device varies in proportion with the forward current flowing through it.

The figure below represents the VI characteristics of LED: 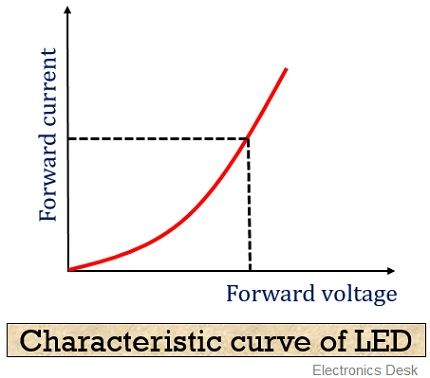 Here the x-axis represents the forward applied voltage and the y-axis shows the forward current flowing through the device.

A thing is to be kept in mind while connecting LED to the power supply, which is, that a resistor is to be placed in series with the whole circuit. This is done so as to secure the circuit from excess current. Usually, during operation low dc voltage is provided to the LED and around 5mA current is to be provided to it. This is maintained by the limiting resistor.

So the figure given below will provide you with a brief idea about the material through which LED is formed and its resultant emitted colour. 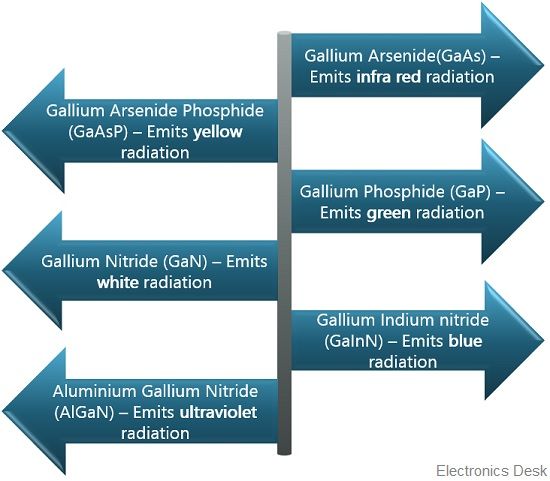 A major drawback of LED is that if proper control is not maintained while providing voltage or to the current flowing through it. Then it can cause total damage to the device.

So, basically LED is an optoelectronic device. The charge carriers recombination on the application of a voltage produces light energy.