Definition: A circuit that is capable of sampling the input signal applied to its terminal as well as holding the sampled value up to the last sample for a particular time interval is known as sample and hold circuit. It basically utilizes an analog switch and a capacitor to perform the task.

The circuit samples the input signal in the time interval between 1 to 10 microsecond. Along with that holds the sampled value until another sampling command is provided to it.

The figure below represents the basic circuit for the sample and hold circuit: 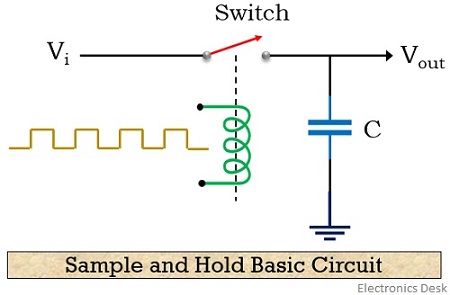 But now at the hold mode, the capacitor holds the charge that was initially being stored at the time of sample mode.

Need for Sample and Hold Circuit

We already know that digital communication is advantageous when compared with analog communication. However, to utilize a digital system, the applied signal at the input must also be in digitized form.

While originally, a signal is analog in nature. So, in order to change the analog signal into digital form, a sample and hold circuit is used. It is usually placed before an analog to digital converter.

Basically the sample and hold circuit, samples the analog signal and the capacitor present holds these samples. This sampled value when provided to the ADC, it generates a discrete signal from an analog one.

Let’s first see the input and output response of a sample and hold circuit: 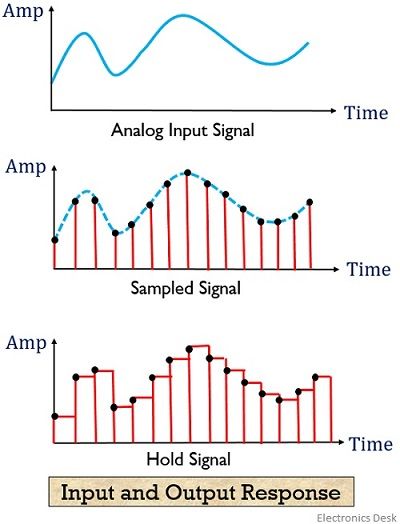 The first diagram in the above figure represents an analog signal that is applied at the input of the sample and hold circuit.

The figure below represents the practical sample and hold circuit: 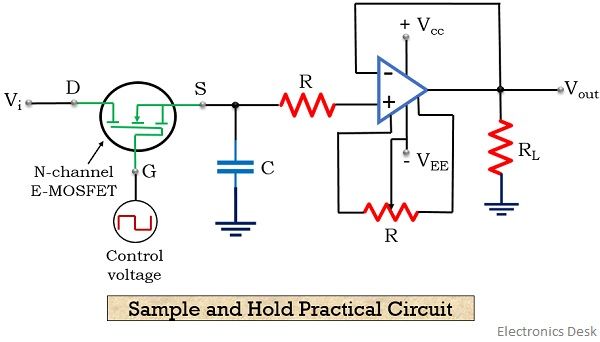 As we can see in the figure above that the circuit is composed of an E-MOSFET along with a capacitor and an op-amp. The enhancement type MOSFET acts as switch, whose conducting and the non-conducting state decides the sampling and holding duration of the circuit.

Working of Sample and Hold Circuit

As we can see in the practical representation of the circuit, that input voltage Vi is applied at the drain terminal of E-MOSFET. Also, a sample and hold control voltage, Vs is provided at the gate terminal of the E-MOS.

Due to the conducting state, the MOSFET acts as a closed switch. And this leads to the charging of the capacitor present in the circuit with the input applied voltage.

This charging duration of the capacitor is said to be the sampling interval, and at this time, the overall input appears at the output as well as at the capacitor.

Further, when the voltage applied at the gate terminal of the transistor is 0, then the E-MOS comes in a non-conducting state. Due to this, it acts as an open switch, and input, in this case, will not appear at the source.

But at this particular condition, though the capacitor is not getting charged or discharged, it is holding the voltage by which it was charged at the sampling interval.

It is to be kept in mind that the frequency of control signal, must be necessarily more than that of the applied input signal. 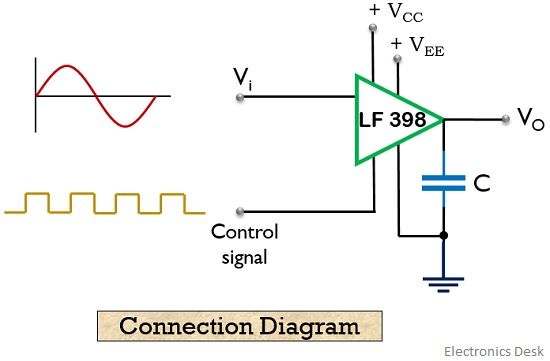 As we can see that one pin of the IC is provided with analog input while at the other pin, the control voltage is fed. Further, the sample and hold signal is generated.

Let us now have a look at the waveform representation of input and output waveform of the signal at the sample and hold circuit. 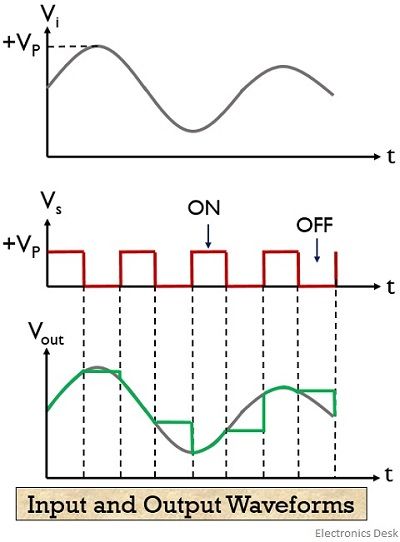 In this way, a sample and hold circuit samples the applied signal and holds a particular value until the desired time period.

Applications of Sample and Hold Circuit

This is all about the sample and hold circuit, introduction, circuit representation and working with applications.