Another major difference between the two is that the rectification efficiency of half wave rectifier is somewhat less as compared to the full wave rectifier.

Let’s have a look at the contents to be discussed under this article, then we will move further and discuss other important differences between the two.

Definition of Half Wave Rectifier

The figure below shows the circuit of half wave rectifier: 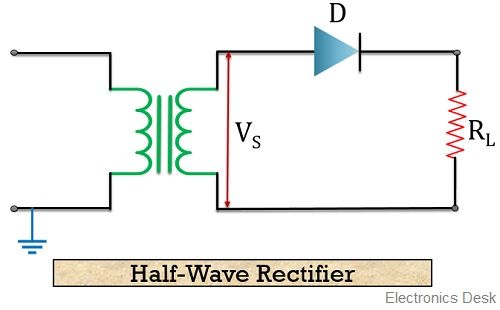 As we can see in the figure that it is composed of an ac source, a diode, a step-down transformer, and a resistor that serves as a load.

Now let us understand how a half wave rectifier circuit operates:

When positive half of the input ac signal is applied at the circuit, then the diode gets forward biased. As we are already familiar with the operation of a diode that in forward biased case it starts behaving as a closed switch. Due to this, it passes current or we can say it conducts.

It can be clearly seen in the figure that resistor or load is in series with the applied input voltage. Thus the current that flows through the diode will appear across the load. Hence we achieve positive half of the applied input signal at the output. When negative half of the ac input signal is applied then it makes the diode reverse biased. Due to which it acts as an open switch hence no current flows through it. Resultantly, no any output appears at the load.

So, at the output of the half wave rectifier, we achieve a set of positive half cycles between which some constant negative voltage also appears.

The figure below represents the output achieved in the case of half wave rectifier:

Definition of Half Wave Rectifier

The next figure shown below represents the circuit of a centre-tap full wave rectifier: 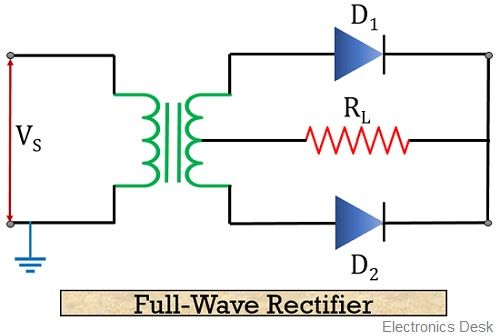 It consists of a step-down transformer along with 2 diodes connected with the resistor(load).

Let us now move further to understand the operation of full wave rectifier:

Moving further, when the negative half of the input is applied. Then diode D1 will come in reverse biased condition and conduction will not take place through it. Resultantly, no output is achieved at the load. But due to this negative half cycle, diode D2 will now be forward biased and now starts conduction. Due to which current flows through it and hence appears at the load.

It is noteworthy here that the direction of the current that flows through the load is same in case of both the applied halves of the input signal. Hence, we achieve continuous positive half cycle at the output of full wave rectifier.

The figure below represents the output achieved in the case of full wave rectifier:

Key Differences between Half Wave and Full Wave Rectifier

5 thoughts on “Difference Between Half Wave and Full Wave Rectifier”