Definition: A full wave rectifier is a rectification circuit that is used to change the overall ac signal that is applied across its terminals into a pulsating dc form.

We know that rectification is nothing but the conversion of ac signal into dc. However, basically there exist two types of rectifiers, the first one is a half wave rectifier while the second one is a full wave rectifier which we will be going to discuss in this article.

A full-wave rectifier uses either 2 or 4 diodes in order to convert the applied ac signal into dc one. So, on the basis of the number of diodes used in the circuit and their arrangement, full wave rectifiers are classified as

In this section, we will separately discuss how the two circuits change an ac signal into a pulsating dc signal. So, let us first discuss the centre-tap full wave rectifier.

The figure below shows the circuit representation of a centre-tapped full wave rectifier: 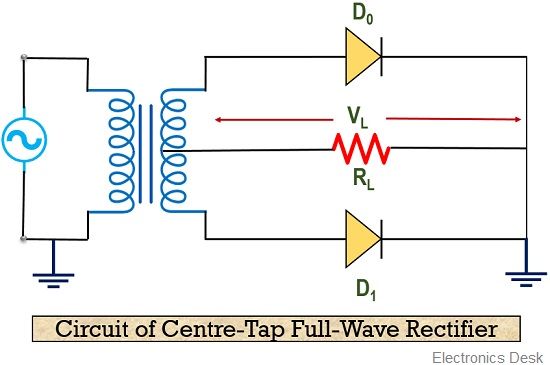 Here, we can see that the rectifier circuitry is composed of a centre-tapped transformer, whose secondary winding forms a connection with the anodes of the two diodes D0 and D1. While the primary winding is provided with the ac input supply.

The cathode of the two diodes are connected together with a load resistance RL and again with the centre of secondary of the transformer.

Let us proceed further to understand the operation of the centre-tap full-wave rectifier.

Due to this D0 acts as a closed switch and current starts flowing in the upper half of the circuit through RL.

This provides one half of signal at the output of the rectifier.

Thereby allowing current to flow at the lower region through the load resistance RL.

As we can see in the figure above that in both cases, the direction of flow of current is the same.

Thus, combinely at the output, we achieve continuous positive half cycle.

The figure given below shows the circuit representation of a bridge type full wave rectifier: 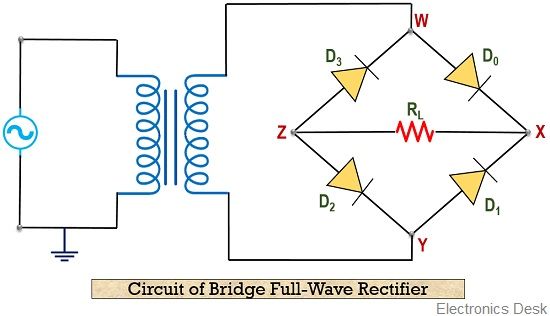 As we have already discussed that a bridge rectifier is composed of 4 diodes. The circuit representation is called so because the diodes are connected together in Wheatstone bridge configuration.

As we can see that this connection forms 4 junctions namely, W, X, Y and Z. So, junction W and Y are connected to the secondary winding of the transformer. While the junction X and Z are connected with the load RL.

Let us move further to know the operation of the bridge full wave rectifier.

We have already seen the circuit showing the bridge configuration of the full-wave rectifier.

This forward connection allows forward current to flow through the load RL thereby generating a signal at the output of the rectifier.

Further, when negative half of the signal is applied then it forward biases the diode D1 and D3. Due to this forward connection, these 2 diodes act as a closed switch and current starts flowing through the load resistance RL.

As we can see in the figure that the direction of flow of current through the load is the same for both the halves.

Thus at the output of the circuit, a continuous positive half signal is obtained.

In this way, a full-wave rectifier operates to provide a pulsating dc signal at its output.

These are the following factors that are to be analyzed here:

Suppose the voltage applied at the input of the rectifier is

We have already discussed the two current flows in case of 2 different half cycles of the input, so

For positive half of input,

For negative half of input,

And the peak value of current across the load

For bridge rectifier is,

As we already know that current through the load is the same for both the cycles of the ac signal thus, the dc output current can be given as

The average dc voltage is given as

The rms current through the load RL is given as 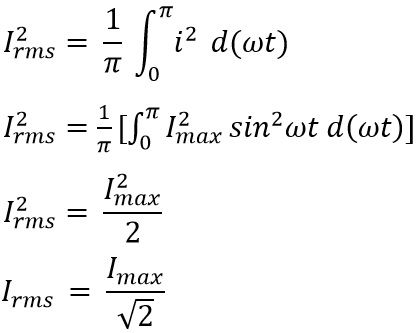 The form factor is the ratio of rms value to the dc output value of current. It is given as

The ripple factor of a full wave rectifier is given as

Putting the value of Kf in the above equation

We have already discussed that the rectification efficiency is the ratio of dc power to the ac power. 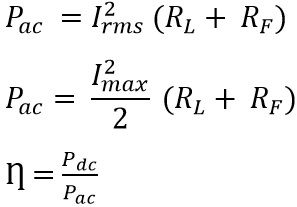 Substituting the values in the above equation 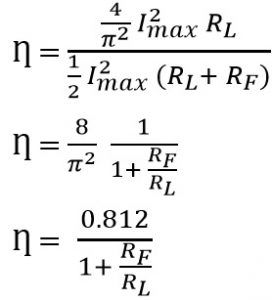 This is all about the circuit and working of a full wave rectifier.