A half wave rectifier circuit uses only a single diode, due to the unidirectional current flow property of the diode.

We know that rectifier is basically a device that is used to change an ac signal into a pulsating dc form. But how this happens by making use of diodes?

We are aware of the fact that a diode exhibits the property of conducting current in forward direction only by blocking the conduction in reverse direction.

Also, when resistance is connected in series with the diode, then the unidirectional voltage will appear across the resistance.

Thereby changing ac signal into dc. So, this property is utilized by the rectifiers for the purpose of signal rectification.

The figure below represents the circuit diagram of a half-wave rectifier: 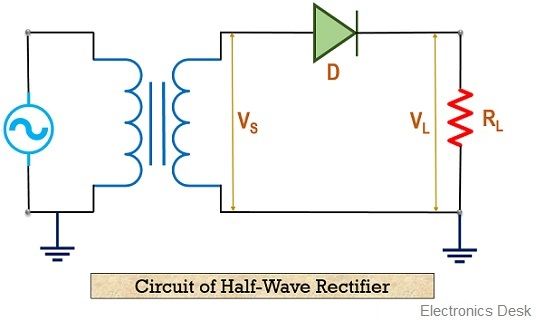 Here, the figure shows the circuit of the half-wave rectifier, consisting of a pn junction semiconductor diode and a load resistance RL in series with it. The diode and resistance form series connection with the secondary winding of the step-down transformer. While the primary is connected with the ac source.

Now, let’s proceed further and understand how a half wave rectifier operates.

The ac source provides ac voltage to the primary winding of the step-down transformer. This reduces the high applied ac voltage to a low-value ac value.

So, this ac voltage is allowed to flow through the rectifier circuit. But both the halves react differently when passed through the circuit.

Resultantly, the overall applied voltage appears across the load resistance. As the diode is assumed to be an ideal diode.

Resultantly, for the negative half of the voltage, no power appears at the load.

Hence at the load of the half wave rectifier circuit, a series of positive half of the applied input voltage is achieved.

Also, it is clear from the above figure that the output is pulsating dc despite being steady dc.

So, to eliminate these ripple component (ac part), filter units are employed that gives constant dc signal at the output.

The factors that are to be analyzed in this section are as follows:

Peak Inverse Voltage: It is abbreviated as PIV. It the maximum voltage that can be handled by the diode when it is reverse biased.

As in reverse bias no current flow through the circuit, thus the applied reverse voltage appears across the diode.

Hence, for the half-wave rectifier, the maximum applied voltage is the PIV thus,

Peak Current: Peak current is defined as the maximum current that flows through the rectifier circuit.

The sinusoidal applied input voltage is given as

And the current flowing through the circuit,

Then the maximum current flowing through the diode is given as

On putting the value of Imax in above equation we get

DC output voltage: Average value of the voltage at the load is given as 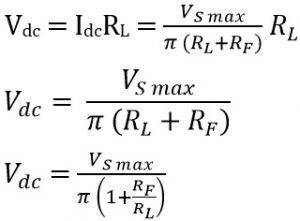 RMS value of current: The RMS current flowing through the diode 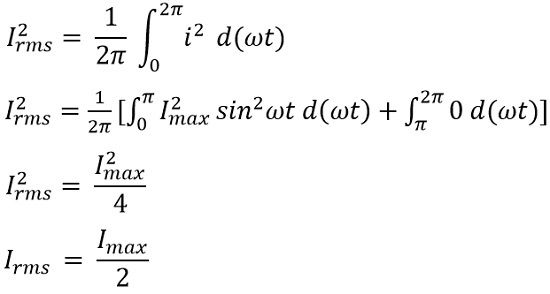 Putting the value of Imax in the above equation 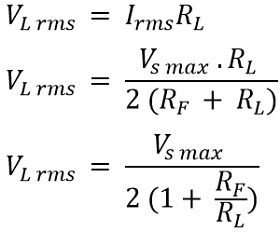 Form factor: It is defined as the ratio of RMS current to the dc output current. It is given as

Peak factor: It is defined as the ratio of peak current to the RMS current. And is given by

So, we will have

These ripples are basically undesirable and the value of ripple current must be as small as possible in order to have high efficiency.

The ripple factor is given as,

Rectification Efficiency: It is the ratio of dc output power to the ac input applied power.

This is all about the circuit and working of half wave rectifier.