Definition: An oscillator is basically a signal generator that produces a sinusoidal or non-sinusoidal signal of some particular frequency. Oscillators find their various applications as these are the fundamental component of any electrical and electronic circuits.

At the time of defining, we say oscillators are generators. But more specifically, oscillators are energy converter that transforms dc energy into equivalent ac energy. The frequency ranges of the ac signal at the output of oscillator ranges from a few Hz to several GHz.

We are already aware of the fact that an amplifier needs ac input signal that is amplified and achieved at the output of the amplifier. However, oscillator simply requires dc voltage in order to produce ac signal of desired frequency.

The oscillator is mainly classified on the basis of the signal generated at its output:

As we have discussed earlier that an oscillator is nothing but a combination of amplifier along with a positive feedback circuit. The figure below represents the block diagram of an oscillator: 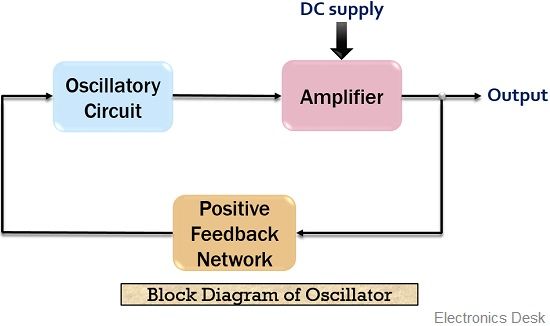 Here the feedback network is the frequency selective circuit. It is noteworthy here that the oscillatory circuit employed before the amplifier circuit in the above figure can be LC tank circuit, R-C network or quartz crystal.

As we know that we have employed a positive feedback circuit over here. The reason for this is that feedback provides a part of the output to the oscillatory circuit in the correct phase so as to have sustained oscillations.

Now, let’s move further in order to understand the detailed operation of an oscillator.

Circuit operation of an Oscillator

In the previous section, we got the idea about the basic working of an oscillator with the help of block diagram. So, in this section, we will get to know about the operation of the oscillator by circuit analysis.

The figure below represents the basic oscillator feedback circuit:

Here β basically defines the fraction of output which is provided as feedback to the input.

This voltage is then provided to the feedback network which is basically a resonant circuit in order to have the highest feedback at a frequency.

So, the signal achieved at the output of the feedback amplifier is given as,

If the amplifier and feedback circuit introduces 0° phase shift. Then both feedback signal, as well as the input signal, will be in phase with each other.

Now, when the output of the feedback circuit is provided to the amplifier along with the input.

Then, the signal at the output of the amplifier will be given as,

So, we can write, the closed loop gain of the oscillator with feedback,

Suppose, we provide only the output of the feedback circuit at the input of the amplifier and remove the originally applied input signal.

After the removal of Vi, the loop gain of the oscillator is responsible for sustained oscillations.

Hence, each time after passing the loop the amplitude of the signal will get reduced. Resultantly, oscillations will die out.

It is to be noted here that, initially, the loop gain is always more than 1 in order to build up the oscillations. But, once a certain voltage is reached by the signal then the loop gain now becomes 1.

This is due to the non-linear behaviour of the feedback amplifier circuit.

What is Barkhausen Criteria?

Barkhausen criteria state the two conditions to achieve sustained oscillations. These are given below:

These two conditions will provide sustained oscillations at the output of the amplifier. This is termed as Barkhausen Criteria.

Oscillatory circuit is formed by LC network, RC circuit or quartz crystal etc. In the figure here a tank circuit is represented by the parallel connection of an inductor and capacitor: 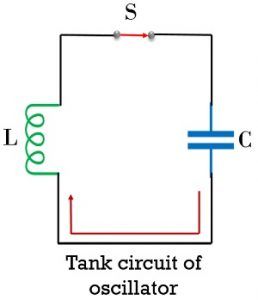 Due to the generated emf, current will again begin to flow through the circuit. Thus, charges will flow and the capacitor will ultimately get charged and holds energy in the form of the electrostatic field.

This alternate charging and discharging of capacitor and inductor will produce continuous oscillations. 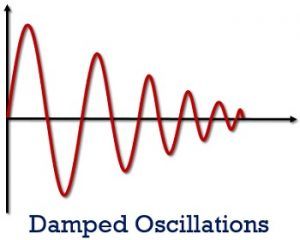 Here, we can see that the amplitude of the sinusoidal oscillations is not equal. This is due to the presence of losses in the inductor and capacitor.

The figure below shows the waveform for Undamped oscillations: 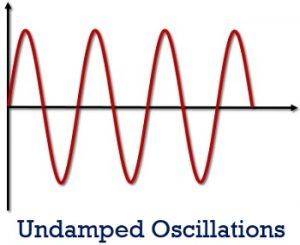 Basically, the oscillator is supposed to provide such oscillations but this does not happen exactly.

Frequency of the Oscillator circuit

It is also called as Resonant frequency. It is basically defined as the frequency of oscillations. Usually, the particular frequency at which the oscillator is set initially is not maintained over the entire cycle of oscillations.

This is so because, these resistor, inductor and capacitor show variation with the increase in circuit temperature.

Therefore, there exists a formula for the resonant frequency of oscillator:

For resonance to occur 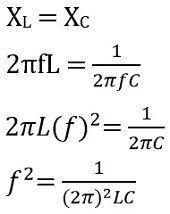 The expression for the resonant frequency of a tuned LC circuit

Oscillators are widely used in numerous circuits like in amplitude and frequency modulating circuits, in superheterodyne receivers etc. These are used to produce clock signals.