Basically when an external potential is provided then a light emitting diode gives off light. Whereas in photodiodes, some external light energy must be provided to allow conduction through the device.

In this article, you will get to know some other important differences between the two. But before proceeding towards that just have a look at the contents that are to be addressed under this article.

LED is an acronym used for the light emitting diode. These are basically forward biased device that emits light when the external potential is provided to its terminals.

The working of an LED is based on the principle of electroluminance. When an external potential is provided then electron-hole recombination occurs. Due to this recombination, some energy is liberated either in the form of heat or light.

But in LEDs, the energy liberation occurs in the form of light. Due to this reason, these diodes hold the tendency to emit light.

Now, the question arises which factor decides the emission of light through the diode?

Basically, this depends on the semiconductor material used for the fabrication of diodes.

When diodes are fabricated with silicon or germanium material, then the recombination produces energy in the form of heat. Whereas, in the case of GaAsP or GaP materials, energy is emitted in the form of light.

The figure below represents the structure of the LED: 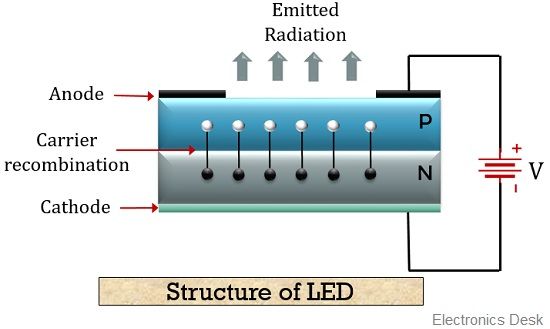 This repulsive force causes the holes and electrons to get recombined after overcoming the potential barrier.

More simply we can understand it by assuming the energy band diagram.

We know free electrons are present in the conduction band and this band is above the valence band. The valence band contains holes.

So, the electrons are present in higher energy state and to combine with the holes present in the lower energy state, they must give off some energy. And the materials like GaAsP or GaP gives off this energy in the form of light.

Hence the diode emits light due recombination of electrons and holes when the external potential is provided to it.

The name photodiode is itself suggesting its operation. We know photo means light so it is basically a device whose operation depends on the illumination provided to it. 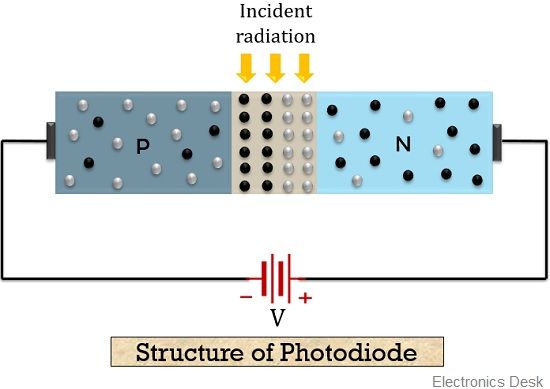 Here , in the above figure, we can see that the pn junction of the device is exposed to light.

We know that in reverse biased condition a wide depletion region exists at the pn junction. In the depletion region, neutral atoms are present as this region is depleted of the charge carriers.

Even when no external illumination is provided at the junction, then due to reverse applied potential minority carriers will flow and generate a reverse leakage current.

This current is known as the dark current.

But once the junction is supplied with external light then due to an increase in the junction temperature, the electron and hole present in the depletion region gets free. Thus their movement produces electric current.

With the rise in the intensity of the light provided, the junction temperature also increases. With the increase in the temperature, the generation of the electron-hole pair will also increase, which resultantly increase the current flowing through the device.

Key Differences Between LED and Photodiode

So, from the above discussion, we can conclude that though LED and photodiode both are types of diodes. But their operating principles are entirely different from each other. This is the reason the two finds applications in different fields.

1 thought on “Difference Between LED and Photodiode”