A way by which the satellite is kept in the correct orbit in space is known as Satellite Launching. The earth-based stations are responsible for providing proper control to the satellite moving in space.

This is the basic behaviour which the satellite orbiting earth exhibit. As no communication information is originated or terminated at the satellite itself. Thus, it is not wrong to say that the satellite can be regarded as an active transmission relay and performs the action of retransmitting the received signal with necessary processing. It mainly behaves as relay towers that are generally used in terrestrial microwave communications.

The use of communication satellites at the commercial level began in the mid-1960s and has gained immense popularity with technological advancements. And due to this reason, these satellites are used in applications where information in the form of data, voice or video is needed to be transferred. These satellites provide services related to one to one communication or broadcasting. Also, it is suitable for personal communications and private network users.

As far as communication satellite is concerned, there are active and passive satellites. These two major classifications of satellites are differentiated on the basis of whether the satellite in space performs modifications or amplification of the signals coming from the earth station or not.

A passive satellite is the one that performs no amplification or modification in the signal which it receives from the ground station. This means no power is generated and only the incident power will be reflected towards a single or multiple earth-based stations. On the contrary, active satellites are a bit different because in this case, the signal which is received by satellite in space will undergo necessary modifications and then is retransmitted towards the earth stations. This means that these satellites are designed to transmit power and are controlled by the operators present on the ground.

We already know that satellite is regarded as a moving object in space that orbits the earth. The energy that causes the satellite to move is provided by fuel which is regarded as Propellant. This helps to boost the motion of satellites above the earth’s atmosphere. 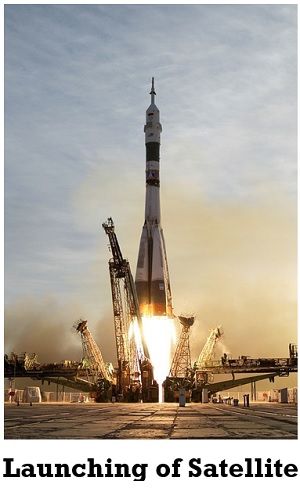 Now, the question arises – how the effect of gravity is compensated?

We are aware of the fact that Newton explained that there is the gravitational force due to which every object that is thrown upward will experience a pull towards the surface of the earth. If we talk about the upward motion of the satellite then it is the result of propellent (fuel) that is present within the spacecraft. Basically, the propellent powers the spacecraft and due to its effect, the spacecraft is pushed away from the earth against gravity. More simply, it can be said that the fuel is burnt and exhaust is produced, the exhaust is nothing but the flame, hot gases, and smoke which is the result of burnt fuel.

It is to be noted here that in order to maintain the upward motion of the rocket so that it is not pulled by the earth’s gravity, a sufficient amount of propellants will be needed. As when sufficient propellant is provided then the thrust (a type of force) pushes the rocket up more than the gravitational force that is pulling the rocket down.

Process of Launching of Satellite

Satellite launching is defined as the process by which the satellite is placed in the proper orbit. The operation of the satellite in this duration is controlled by the earth stations. However, rockets or spacecraft plays a very crucial role in the launching process as propellants on which the rocket operates are somewhat fragile in nature.

The launching of the satellite is divided into four stages, given as follows:

With the help of the launch vehicle, the satellites get placed in an adequate orbit. The launch vehicles are basically multi-stage rockets and thus are mainly classified as:

2. Reusable Launch Vehicles (RLV): This category of launch vehicles offers reusability and so can be used various times for launching satellites in space. RLV works in a way that it simply comes back to the earth once satellite starts moving in space. Sometimes it is given the name, space shuttle.

Like the first and second stages of ELV, the space shuttle behaves in a similar manner. However, in the third stage, the satellite is inserted with a cargo bay and the satellite gets ejected from the cargo bay when the RLV attains an elevation of around 150 to 200 miles. Once this height is achieved then the shuttle will be fired thereby placing the satellite in the transfer orbit and after this the RLV comes back to the earth and can be used as and when required.

This is all about Satellite Launching.