CDMA is a short form used for Code Division Multiple Access. CDMA is a technique that allows multiple users to simultaneously transmit data signals over a common channel by assigning unique spreading code to each individual user. This leads to the increasing of bandwidth used by transmitting stations from a few Hz to a few MHz.

CDMA uses the principle of spread spectrum. Due to this, the various signals are modulated after which a single signal is transmitted and is correlated at the receiving end using the spreading function to get the actual data.

CDMA actually came into existence in the 1940s. But after technological advancements, it has been used for military purposes. As transmitted signal appears as noise to unauthorized user thus decoding is quite difficult without the knowledge of the right spreading code.

Spread spectrum is a method that offers a way to transmit a signal over a communication channel with a bandwidth that is comparatively wider than the bandwidth which is actually needed to transmit the signal. More simply, in this technique, the bandwidth of the signal is increased intentionally in the frequency domain during transmission.

CDMA is sometimes referred to as spread spectrum multiple access (SSMA) because the insertion of spreading code increases the transmission bandwidth.

Whenever we talk about any satellite-based system, then it is obvious that multiple users form connections with a single satellite transponder for the purpose of communication on a daily basis. Hence, this requires that the available resources must be shared by each of them without hampering each other’s data. So, to achieve this multiple access technique is used.

Multiple access is a way of transmitting the data from multiple transmitters over a common communication channel. There are majorly three ways in which multiple access can be done, these are as follows:

This content is all about code division multiple access, in which, unlike TDMA and FDMA, neither time nor frequency slots, respectively are required to be divided amongst the various users. As by assigning separate unique codes to each user, the data is combinedly transmitted over the channel, and at the other end, the receiving stations use the respective codes that were used by the transmitting stations to retrieve the actual message signal of each station. 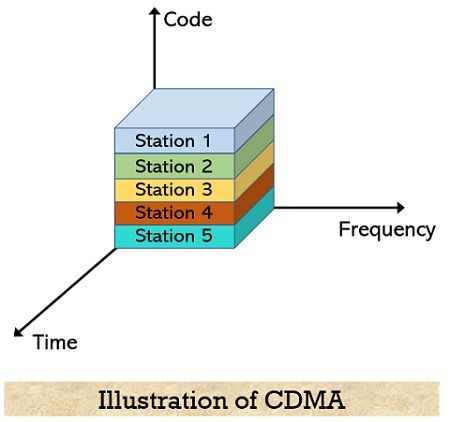 Hence, in CDMA, with the help of unique spreading codes, multiple users simultaneously access the RF bandwidth for signal transmission.

It is to be noted here that, in this approach, the codes to be used are selected in a way that there must be the least possible correlation between them.

There are two ways in which CDMA is implemented, namely,

These two are different in a way that direct sequence spread spectrum makes use of high-speed spreading code to have wider bandwidth while in frequency hopping technique carrier frequency is shifted to obtain the same.

The principle of operation of DS-CDMA is such that two or even more signals of the same bandwidth, get individually spread by a user-specific orthogonal code. Over the communication channel, the signals are mixed and sent combinedly. Here the energy for transmission will remain the same however, bandwidth requirement will be more. At the receiving end, de-spreading of signals is done using the replica of the orthogonal code.

The figure below shows the block diagram representation of DS-CDMA for transmission and reception of the signal: 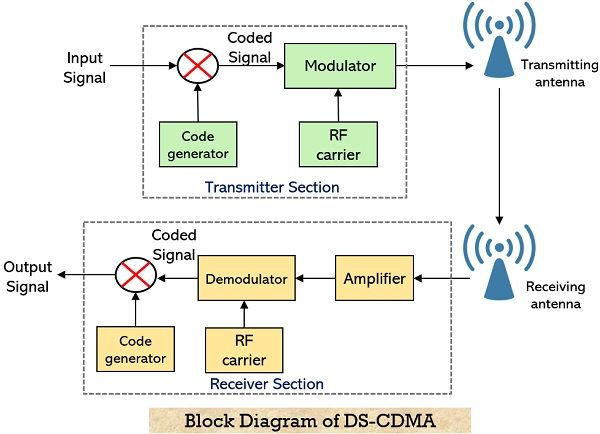 Initially, for transmission, the pseudorandom code generator generates a unique spreading code. This random code sequence is multiplied by the input data stream that the user actually wants to transmit. For each individual user, willing to transmit over that channel, a specific PN code will be generated for spreading the bit sequence.

Further, the modulator (PSK type) performs the modulation of obtained bit sequence with a carrier signal thereby providing a BPSK modulated signal as output. This signal is then broadcasted using an antenna.

The waveform representation is shown below clearly represents the generation of BPSK modulated signal: 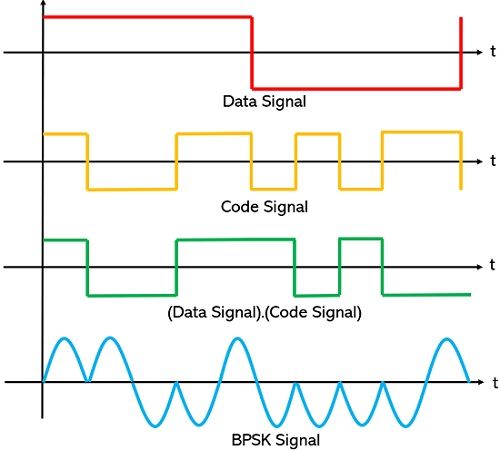 At the time of signal reception, first, the obtained signal is amplified to raise its level. Then demodulation of the signal is performed using radio-frequency carrier. Here the obtained sequence appears nothing more than noise. However, the replica of code produced by the pseudo code generator is multiplied with the data stream obtained after demodulation.

To get the original data stream (i.e., for de-spreading) the PN code generated at the receiver end must be same as that produced as the transmitting end for each individual user. After multiplication with the de-spreading code, original data is retrieved by the receiving station.

So, to retrieve actual information, data is to be multiplied with the respective code of each user. In this way using direct spreading, signals can be transmitted over a channel at the same time.

The word hopping corresponds to jumping or switching. The frequency hopping type of CDMA technique is based on accessing different frequency slots of a complete channel bandwidth at different instants of time by multiple users. It is not FDMA or TDMA because in that case a fixed frequency or time slot respectively is provided to different users. However, here each specific user can access to same frequency slot in different time instants. 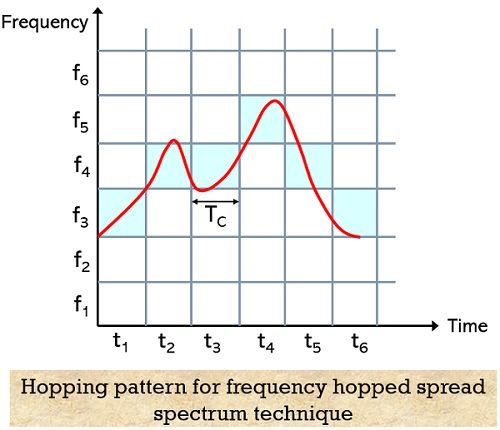 Here, in time slot t4, the signal is transmitting in band f5, likewise in t2, band f4 is transmitting, and so on. Also, in slot t3, band f4 is again transmitting. Thus, the frequency and time slots are showing variable nature. The time interval between two slots is called chirp duration or hopping interval and is denoted by Tc.

To understand how this happens, consider the block diagram shown below: 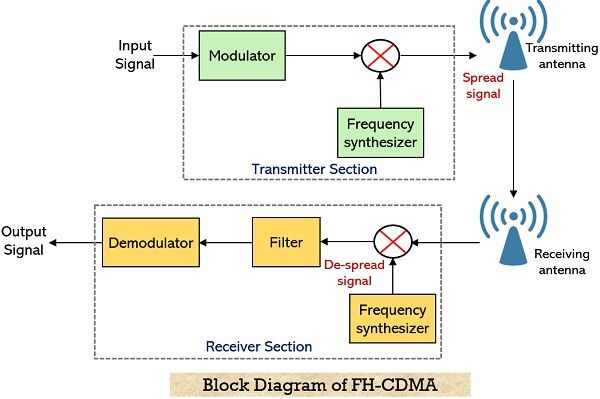 Here frequency synthesizer is used to change the carrier frequency. The message signal is first fed to the modulator, according to a pre-determined sequence, the carrier frequency is generated that hops in steps. Basically, the overall satellite bandwidth is divided into series of frequency slots with which the encoded carrier sequentially hops here. This hopping sequence must not be easily predictable like the PN code of DS-CDMA. Externally, it appears that a single signal is occupying the complete bandwidth but in actuality, it is occupying a single slot at a time.

At the receiving end, a similar frequency synthesizer must be present for generating a replica of carrier frequency, which is mixed with the received signal, and the output is filtered for noise removal. This provides a fixed intermediate frequency signal which is demodulated to get the actual message signal.

Now, consider an example to understand signal transmission and reception through CDMA. 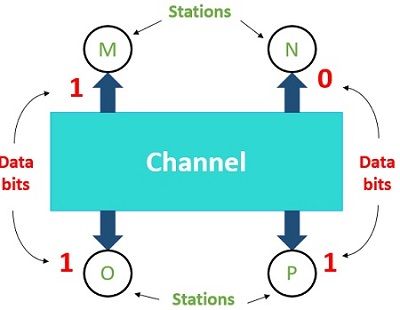 Suppose there are four stations M, N, O, and P individually transmitting 1, 0, 1, 1. And each one is having a unique code sequence (C1, C2, C3, C4) where the codes are of orthogonal nature.

To represent data bits and code bits we will use polar signaling thus, 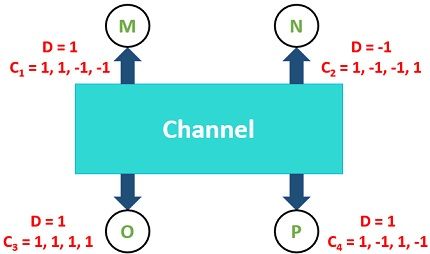 It is to be noted here that always while finding the product of two data sequences, 1st bit of one sequence is multiplied with the first bit of another sequence. Likewise, 2nd bit with 2nd bit and so on.

On addition of all 4 bits of resultant, we will get 0. Thus, codes are of orthogonal nature.

So, 1+1+1+1 will give 4 as output. Hence, verifying that there are 4 stations transmitting at a time.

Transmission: We have discussed previously that, to perform DS-CDMA, first, data bits are to be multiplied separately with their respective code.

Hence, the resultant of product of data bit and code bit will be: 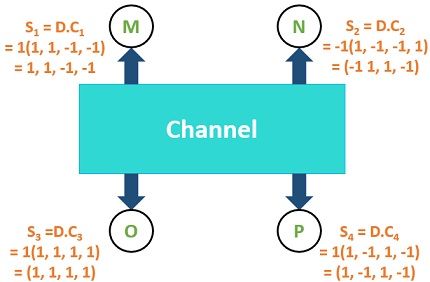 Now, over the channel, the bits will be transmitted combinedly. 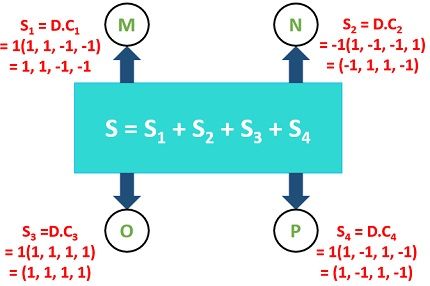 The complete bit sequence to be transmitted will be produced by adding the bits according to their positional sequence: 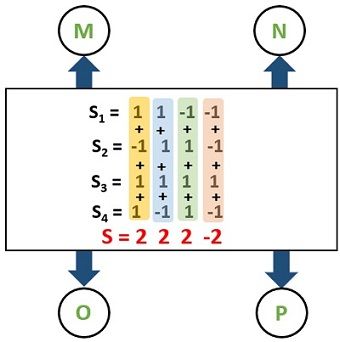 Reception: The receiver will get the above sequence. Now, to retrieve the actual information from this received (coded form) data, each receiving station must have the code sequence of their respective transmitting station.

Here each receiver will get the original data sequence by multiplying the received bit sequence with its respective code stream. 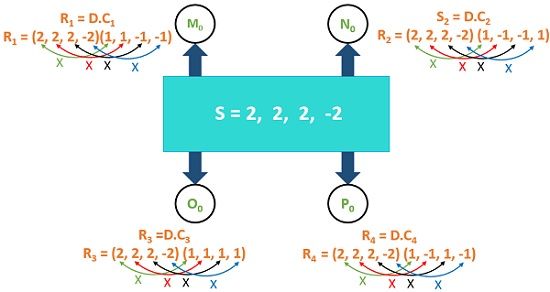 Hence, by summing every bit of the sequence and dividing it will the total number of transmitting stations one can get the originally transmitted data bit. So, calculating for each receiving station, we will get:

It can be clearly checked that the received bits are exactly the same as the one which was transmitted from the transmitting stations. Hence, in this way CDMA can be implemented.

The high capacity and security offered by CDMA make it worthy for use in the field of wireless technology such as mobile telephony, radar, and navigation systems. The combined use of CDMA with GSM technology has provided high-speed internet services like 4G.