Definition: The word ‘transponder‘ is formed by combining the terms transmitter and responder. A satellite transponder is a transparent relay channel that connects the transmitting and receiving antennas for the purpose of communication.

It is basically a multiple equipment channel and not simply a single item of equipment that connects the two separate stations. So, more simply, we can say that a satellite transponder is a series of interlinked devices that form a single communication channel between transmitter and receiver.

A combination of a transmitter-receiver system employed together to execute communication between the two is called a transponder.

We know that whenever there is a need for a signal to get transmitted or received between the two ends then a need for a channel exists through which the transmission or reception can take place. Some signals do not require any specific medium and simply get propagated through a vacuum. But in the case of satellite communication, radio waves cover a quite large space of earth, thus, a proper channel is required which can support the propagation of radio waves from an end to another. This channel is known as a transponder.

It is to be noted here that the bandwidth of the transponder shows dependency on the nature of the signal being carried out by the satellite and the technology used for the transmission.

For typical C-band satellite service, the bandwidth allotted is around 500 MHz and this is divided among various sub-bands where each sub-band is allotted to a single transponder. The bandwidth of a typical transponder is 36 MHz. If we employ 12 such transponders with 4 MHz of guard band between each transponder, then accommodation of 12 transponders in 500 MHz bandwidth is achievable.

What is Satellite Communication?

Satellite communication is a crucial pillar of the global telecommunications system. It uses various artificial satellites that orbit around the earth in order to pass on analog as well as digital signals that carry data, video, and voice to various locations. The operation of a satellite in space is such that it receives the radio signals gathered from the antennas situated on the surface of the earth and retransmits them using a transponder.

Communication through satellites facilitates easy and fast signal transmission and reception. Satellite communication holds great importance in today’s world because it efficiently circulates the signals to the desired location like in remote and rural regions of the earth where even land-based technologies do not show suitability.

The figure below represents the simplified representation of a single conversion transponder for the 6/4 GHz band:

Here, the 6 GHz signal is down-converted into 4 GHz while getting transmitted from an end to another. Let us now proceed and understand how the transponder operates.

Initially, a 6 GHz signal received from an antenna is provided to a low noise amplifier where amplification of the signal is performed. Further, the signal is down-converted to 4 GHz using a local oscillator with a frequency of 2.225 GHz. Now, the intermediate frequency bandpass filter takes the 4 GHz signal as output and removes the undesired frequency signal. Further, the filtered signal undergoes amplification by the use of a pre-amplifier like a traveling wave tube amplifier which is incorporated above. Then the output of the TWTA is fed to a high power amplifier that smoothes out the amplitude and phase variation of the received signal.

In this way, the various units that built a transponder down-converts the 6 GHz signal into 4 GHz and provide the signal from the output of HPA to the transmitting antenna. Hence, in this way a 6/4 GHz transponder operates.

Let us now understand how a 14/11 GHz band transponder operates by considering the diagrammatic representation shown below: 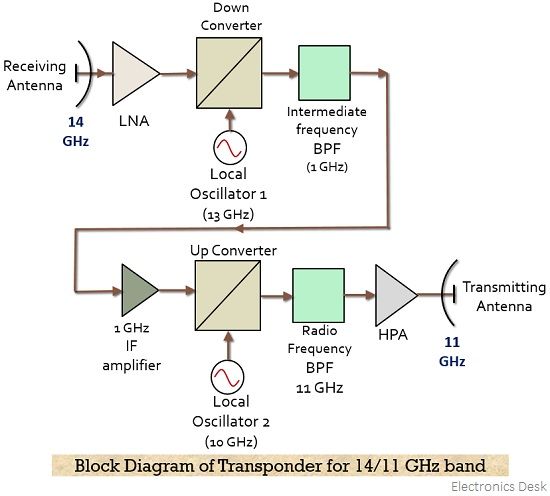 It is clear from the above figure that double frequency conversion is adopted for this band of transponder operation. So, initially, the signal from the antenna is provided to a low noise amplifier for the basic amplification. Further, the amplified signal undergoes down-conversion with the use of a down converter along with a local oscillator whose frequency of operation is 13 GHz.

So, the signal after down-conversion is reduced to 1 GHz and this 1 GHz signal is fed to the local IF bandpass filter where the undesired frequency components are removed. This is then fed to the IF amplifier for signal amplification and provided to an upconverter with a local oscillator frequency of 10 GHz. As a result of upconversion, 1 GHz signal is converted into 11 GHz and is provided to the RF bandpass filter. Lastly, high power amplification of the signal is performed using HPA and the signal is provided to the antenna unit. In this way 14/11 GHz band operation of transponder takes place.

It is to be noted here that there are basically two types of transponders, which are as follows:

Both of these transponders perform frequency conversion and amplification. But along with these two operations, the regenerative transponder demodulates the radio frequency carrier signal to baseband signal along with regeneration of signal and modulation.