CSMA/CD is an acronym used for Carrier Sense Multiple Access with Collision Detection and is a collision detection protocol. It is basically a refinement/improvisation of CSMA where the user detects the occurrence of data packet collision along with sensing for the availability of carrier in a multiple user network channel.

This technique enables us to communicate within a shared network in an efficient manner by keeping a check on data collision within the network. However, this algorithm detects collision but is not capable of reducing it.

In the CSMA technique, each individual user sharing the channel with other users first senses the presence of any other carrier in the channel. If any other user is detected using the channel for data transmission, then it will wait for some random time period and will retransmit to eliminate the chances of collision. However, this has not nullified the collision because if two stations simultaneously begin to transmit after sensing the channel idle then this will lead to collision.

CSMA technology is quite a useful one but it is not incorporated with an acknowledgment mechanism from the receiver. However, there is a significant reason behind the same. The reason is we already know that the presence of various users automatically increases the chance of collision in the network. Along with that if there will be the presence of acknowledgment signals in the network for each transmitted data packet then this will lead to a huge collision.

So, another version of CSMA came into existence where despite waiting for acknowledgment, the users keep the check on whether any collision has occurred during transmission. This modified CSMA scheme is known as CSMA/CD where CD stands for Collision Detection and is used to deal with the inefficiency of CSMA.

The principle of operation of CSMA/CD is:

In simple form, it is basically, Listen while Speak.

But the question arises – Is there any way by which we can deal with this wastage of channel capacity?

The figure shown below represents a flow chart explaining how CSMA/CD takes place. 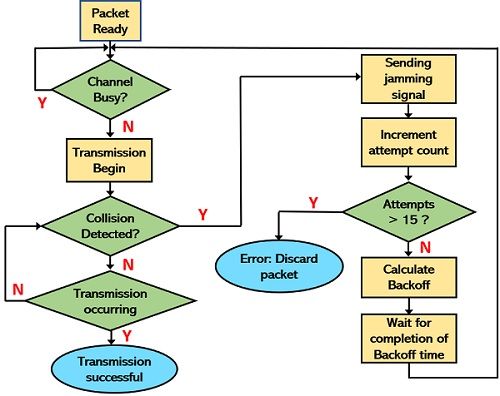 If the channel is already busy that means the transmission is taking place by any other node of the network. So, that particular node will wait and go for sensing again after some time interval. However, if the node finds the channel free then it will start transmitting the data packet over the channel.

Now next, once transmission has started then the respective node will monitor the channel to see if collision has occurred. Here also we have two conditions:

However, if the transmitting node, detects data collision, then it immediately stops transmitting any further bits and notifies all the other nodes in the network regarding data collision by sending a jamming signal to all the nodes. After this, the respective node is required to check whether it has reached the maximum limit of transmission attempts or not. So, for this, the node will increment the attempt by 1 after each time it detects collision and check whether it is less than 15 or not.

The maximum permissible attempts to transmit a packet after detecting collision for a node is 15. So, here will be two more conditions:

If after incrementing, the attempts get more than 15 in the count then the packet gets discarded due to excessive collision. However, in case the count for the same is less than 15 then the respective node will prepare to retransmit the data packet over the channel again. For this, it will calculate the back-off time and will wait for the completion of that time duration. Once this is done, the node will again go for checking the availability of the channel that whether it is free or not in order to resume the transmission.

Here the backoff time is of great importance because if data from two nodes get collided and they began to retransmit after the same time interval then this will lead to collision again. Thus, each node must calculate the back-off time (random time) individually to avoid the chances of collision again.

Suppose there are two stations M and N within a network that possess a propagation delay of 30 minutes. At 10:00 am both the stations have checked whether the channel is idle or busy. As we have already discussed in CSMA that while sensing the carrier, the complete channel will not be checked despite only the respective node region will be checked and at 10:00 am both finds the channel idle and begins to transmit towards each other unaware of each other’s transmission.

Propagation delay defined as the ratio of distance to the velocity of propagation. Both exhibit a propagation delay of 30 minutes as the distance between the two and propagation speed are the same. So, exactly after 15 minutes of starting transmission, data from both nodes will collide.

However, there is a worst-case also.

So, we can say approximately after double the propagation time (i.e., 1 hour), station M will get a collision signal. Hence if τ denotes the maximum propagation delay then if collision occurs then 2τ time will be needed by all the nodes to detect collision and abort further transmission.

It is to be noted here that stations will get the collision signal only when they are still transmitting. If they are done with their end of transmission then stations will remain in ambiguity if it’s their data that have collided and lost or data transmitted by any other station in the network. Thus,

Hence, the packet length must be greater or equal to twice the product of propagation delay and channel bandwidth.

The efficiency of CSMA/CD is given as:

The CSMA/CD scheme can detect collision but is not capable of reducing it. Also, the performance of this scheme decreases with the increase in the load within the network (i.e., nodes).