ALOHA Protocol is a type of random-access protocol that allows simultaneous transmission of data frames by multiple stations over a common communication channel. This protocol is a simple communication technique where each individual station that is a part of the network holds equal priority and operates independently.

Some other names for ALOHA protocol are ALOHA system or ALOHAnet or simply ALOHA.

ALOHA was suggested by Norman Abramson in the early 1970s at the University of Hawaii. That was the first time when a wireless packet data network was demonstrated publicly. Originally it was designed for wireless LAN but gained worldwide popularity for its applicability within a shared medium.

The sole purpose behind the invention of ALOHA was to have inexpensive equipment that will be able to form connections between various users present on the Hawaiian Islands by making use of a central time-sharing computer. We have mentioned at the beginning itself that ALOHA is a type of random access protocol. So, the question arises-

The word random corresponds to anything which is not time or sequence-specific. From random access protocol, we mean that anytime multiple users can access the channel according to their requirement as each individual is equally prioritized. However, its simplicity has some drawbacks which we will discuss later.

To understand this, consider the figure below where a central computer forms a connection with 3 individual remote stations: 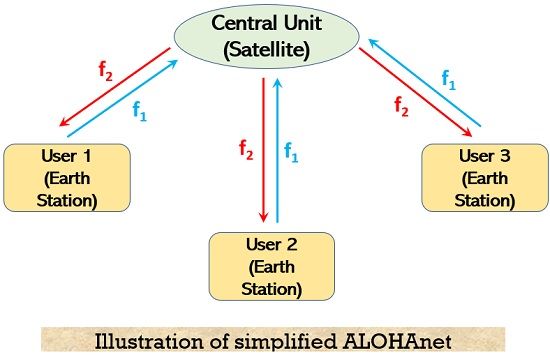 Here all 3 users operate in an uncoordinated manner. This means that at the time of transmission no station is aware of the transmission of data from other stations within the network. So, various uncoordinated users try to share the available resources in order to send the data to the central unit.
Thus, is called a contention scheme because a form of disagreement occurs between the stations whose data will be transmitted through the channel among all of them.

ALOHA is one of the protocols or methods associated with the utilization of the medium for the transmission of data frames from earth stations to satellite or from satellite to earth stations. It is a contention scheme where no centralized control exists and all the stations (nodes) are equally prioritized. This scheme shows suitability towards bursty traffic.

ALOHA protocol is a type of random access protocol that itself is a subclassification of medium access protocol. According to the implementation of the protocol, ALOHA is classified into 2 categories. 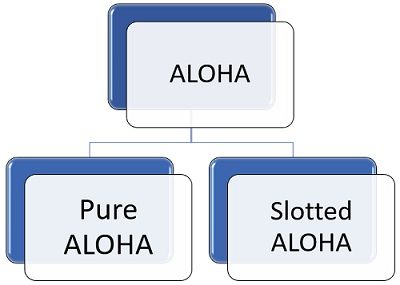 Let us understand each type in detail:

Pure ALOHA is the basic type of ALOHA contention scheme in which the data frames from multiple VSATs are transmitted towards the satellite via a common channel according to the demand. Here due to the bursty nature of traffic within a network, following pure ALOHA protocol, chances of collision of data frames are huge.

This is so because none of the stations is concerned about whether any other station is transmitting at that particular instant or not. So, multiple data packets when transmitted through a common channel undergo collision. The packet collision during transmission over a common channel is shown below: 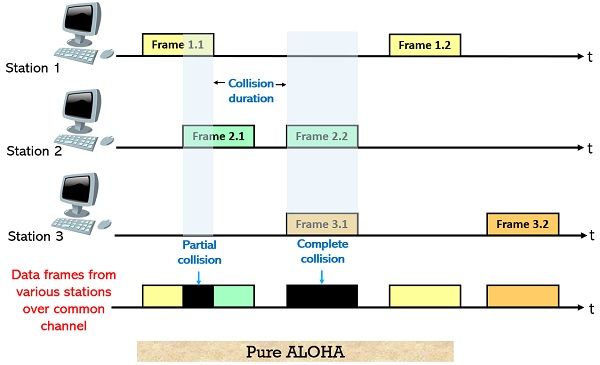 Here it is shown that data packets from three separate stations are sent over a common channel randomly. So, those data frames that are present at the same time instant over the channel will collide and be lost in the path instead of reaching the destination. It does not matter whether the collision is complete or partial because both cases will result in loss of data.

The random nature of back-off time helps to reduce chances of further collision because obviously if multiple stations (who have not received acknowledgment) will retransmit the data after a fixed time period, then this will lead to data collision again.

Suppose in the figure shown below three individual data frames are sent over the channel resulting in a partial collision. 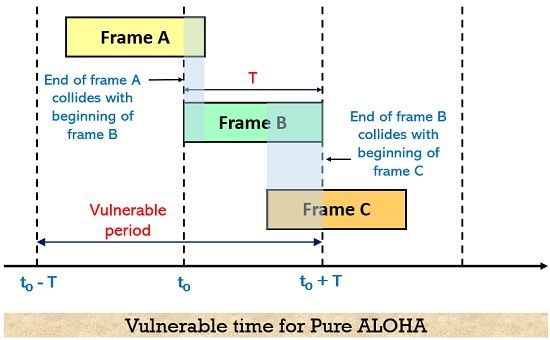 Here each packet is of uniform length with fixed time duration T. During transmission of a data frame A with duration T, if another data frame B is sent then even overlapping of first and last bits of the two frames will result in a collision. Hence both the frames will be completely destroyed.

Thus, once a packet is sent, the next packet will be sent by taking a margin of duration T along with the time duration T of the transmitted packet. Meaning, T before the frame to T once the frame begins. Hence, the vulnerable period will be 2T. This helps in determining channel utilization, given as throughput S

: G is the total number of stations transmitting at the same instant.

For maximum throughput, G must be ½. Therefore,

It is the advanced version of pure aloha and came into existence to increase the efficiency of the former. The reason is that pure aloha has more chances to undergo collision. We have seen that in pure aloha simultaneous transmission of multiple data frames over the channel cause collision and loss of data frames.

In the slotted ALOHA scheme, multiple slots of discrete-time intervals are formed within the complete common channel. Thus, slotted aloha is a combinational approach where pure aloha is implemented with the slotted channel. 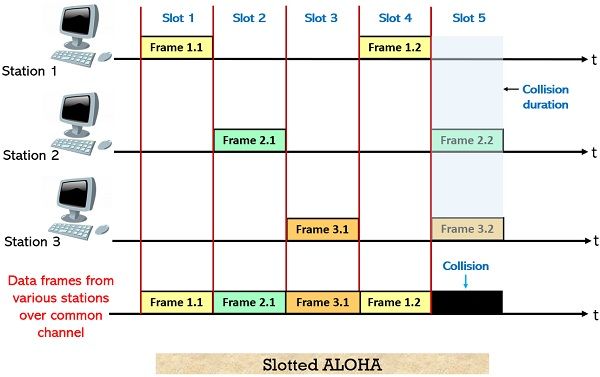 Here each slot has a duration T and data frames are allowed to get transmitted only at the beginning of each time slot. This means that no data frame can be transmitted at any arbitrary time instant. In case, any of the stations fail to transmit in its allotted slot then it is needed to wait for the next slot.

Unlike pure aloha, in slotted aloha, if collision occurs then it is of complete nature (i.e., not partial collision) and data will not be received. This occurs if more than one station is simultaneously transmitting in the same slot.

In slotted aloha, successful data transmission takes place only when each slot individually transmits only a single data frame. By doing this collision probability reduces to a large extent. If no data packet is transmitted in any of the slots, then it will remain idle. It is to be noted here if acknowledgment for any packet is not received then it is considered that it is lost after the collision and is further retransmitted in another slot after considering back-off time. The lost data packets during transmission are known as backlogged packets.

As in slotted aloha, the complete channel time is divided into slots thus, here the vulnerable time gets reduced to half than the pure aloha. 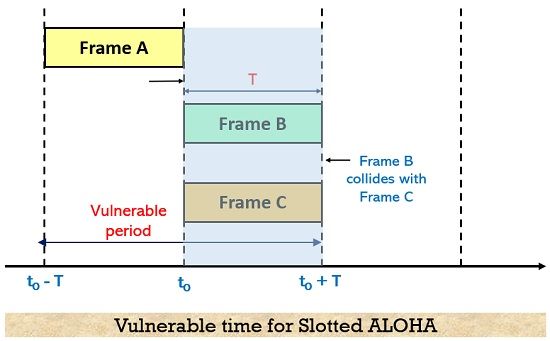 This is so because in slotted aloha it is clearly shown that slots are divided according to the uniform packet duration i.e., T. Also, we have discussed that each packet can only be sent at the beginning of each slot. Thus, here chances of only complete collision occur and that too just within the slot. As here each slot exhibit duration T, thus the vulnerable period will be T.

Hence, channel utilization given by throughput S will be:

For maximum efficiency, G should be 1. Therefore

ALOHAnet offers easy implementation but shows suitability towards light and moderate load. However, in high load conditions, it somewhat fails. This is so because even slotted aloha does not remove collision completely.

To overcome the drawback associated with collision another multiple access technique called CSMA (carrier sense multiple access) is used. In CSMA, channel availability is sensed by the stations to check whether it is idle or not before transmission to avoid the collision of frames.