Generally, the height of these antennas lies between 75 cm to 1.2 m. VSAT offers low data rate operation that ranges between 64 kbps to 128 kbps.

In our previous contents, we have already discussed that a satellite is used to receive the signal coming from the ground and retransmit to the various locations on the ground relative to various applications. Thus, the specifically small terminals present at the ground-based stations that perform the task of transmitting the signal to the satellite and receiving the one coming from satellites are referred to as very small aperture terminal.

VSAT technology supports services like the internet, LAN, IP, voice, video, and data communication thus, it is beneficial for building up powerful public as well as a private network for reliable communication.

Generally, it goes without saying that, in a communication link, the thing which is more importantly considered than signal level is signal to noise ratio. We know that noise varies in direct proportionality with the bandwidth utilization. But less bandwidth is required for low data rate and high bandwidth is needed for high data rate. Thus, in case of low data rate, the noise power will also be low and hence for receiving such a signal, a low gain antenna is required at the receiver terminal. And a low gain antenna needs an antenna with a small aperture.

Thus, such small aperture antennas usually with a diameter between 1 to 2 m come under VSATs. This means the basic feature possessed by the VSAT system is an antenna unit with a very small diameter at the earth station. And so, according to the recently discussed feature of VAST that it is suitable for low data rates, these are majorly used for establishing direct communication between various offices in a network.

The figure given below represents the block diagram representation of the VSAT transmitter and receiver: 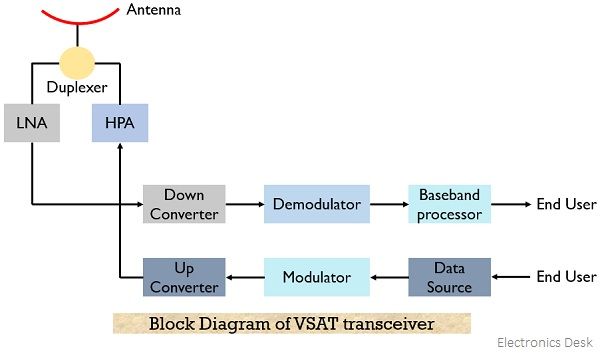 The antenna unit of VSATs is placed on the top of a building and to have maximal gain to system noise temperature of the receiving system at the initial phase, a low noise amplifier is placed closer to the antenna so as to reduce or eliminate the cable losses before pre-amplification takes place.

Considering the transmitter section, at the very beginning, a source of data is present which is followed by a modulator, and then a UP converter is placed. The signal at the output of the UP converter is a power amplifier. While in the receiver section, there is a preamplifier placed near the antenna, the amplified signal from the LNA is down-converted and then a demodulating unit provides the original message signal. The signal obtained from the demodulator is provided to a baseband processor that acts as the last unit to process the received data and provide it to the end user.

How does a VSAT network operate?

Recently we have discussed the block diagram representation of a single VSAT having an outdoor and indoor unit for transceiver operation. However, there are various VSATs present in a VSAT network that forms interconnection with the hub station. VSAT network has a various number of terminals through which the satellite communicates.

The two most common network configurations in which various VSATs within a network are connected are:

The VSAT technology offers transmission and reception of data by antennas having small terminals thus the antenna terminals can be installed at various distributed locations and these form connections with the central hub via satellite. Basically, the VSAT network allows the data coming from the satellite to get redirected to various remote terminals over the earth.

It operates in a way that the satellite transponder sends a signal towards the transceiver where it receives the signal and the ground station behaves like a hub for the complete network. Through that hub, the complete network is controlled. The figure below represents the interconnection of various end users through the ground station via satellite in the form of a star network. 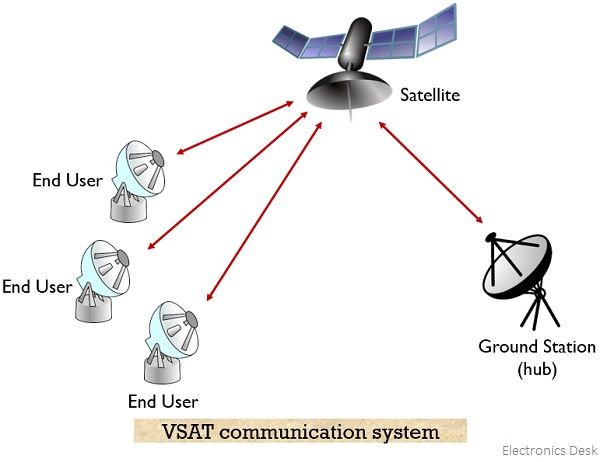 In order to have communication between end users, the actual signal is provided to the central hub and the hub then broadcasts it to the various VSATs in the network with the involvement of the satellite. For the transmission and reception of the signals, some multiple access methods are used. Each end user has its own VSAT. It is to be noted here that due to interconnection of VSATs via hub propagation delay as well as satellite capacity requirement also increases.

In a star network, the double-hop circuit is required however, a mesh network involves a single-hop network.

Generally, time division multiple access is used in the downlink mode where a signal from the hub is provided to the individual VSATs. However, offers low efficiency for the uplink mode. FDMA is also famous within the VSAT network.

But the most favorable technique is DAMA. DAMA stands for demand assigned multiple access and suits the operation of the VSAT network because in a VSAT system there exists bursty traffic which is non-continuous in nature. In the DAMA technique, assigning of transponder channels is done according to the data priority on the first come first serve format. Here a continuous connection is not built between the control station and user terminals however, once a frequency band is allotted to a specific terminal then that particular band will only be allotted to other terminals after the session completion of the former.

Basically, the services for data transmission and reception involved in the VSAT network are some kind of credit verification or reservation requests and these are quite random and spontaneous in nature. Hence, allotting time or frequency to perform TDMA or FDMA respectively will somewhat make the channel utilization improper.

Sometimes CDMA in coupling with ALOHA protocol is also used where data packets are transmitted randomly at different time slots.

The various applications of very small aperture terminals are as follows:

A noteworthy point over here is it offers transmission and reception of narrowband as well as wideband data. The narrowband include credit card transactions, RFIS data, SCADA operation, etc. While wideband includes video conferencing, satellite accessing to remote locations, etc.