Satellite Communication is defined as a type of communication where the exchange of information takes place between different stations present on the surface of the earth using artificial satellites in space. And this communication occurs within the electromagnetic spectrum.
So, in simplest terms we can say when communication between two or more ground-based units is done by making use of satellite is known as satellite communication.

Besides all the above discussion, one of the major questions that come to our mind is:

Why do we actually need satellite communication?

In early times, mainly there were two kinds of communication technologies that were used for long-distance signal transmission from an end to another. These are as follows:

A Britisher, Arthur C Clarke had given the idea of long-distance radio communication that makes use of satellites orbiting around the earth.

With rapid technological development, in the 1920s, long-distance microwave communication has grown rapidly. The world’s first artificial satellite named Sputnik 1 was launched in October 1957 by Soviet Union (Russia). The launch of Sputnik into space was a remarkable step towards technical advancement. With the passage of time, various other satellites were launched into space that has gained worldwide popularity.

Almost after 18 years of the arrival of Sputnik, India also launched an artificial satellite named Aryabhata in the month of April, the year 1975.

How does satellite communication work?

ITU is responsible for managing the motion of satellites in space. We have already discussed that through satellite communication, information is transported from one place to another by making use of satellite.

The figure below represents a satellite communication system: 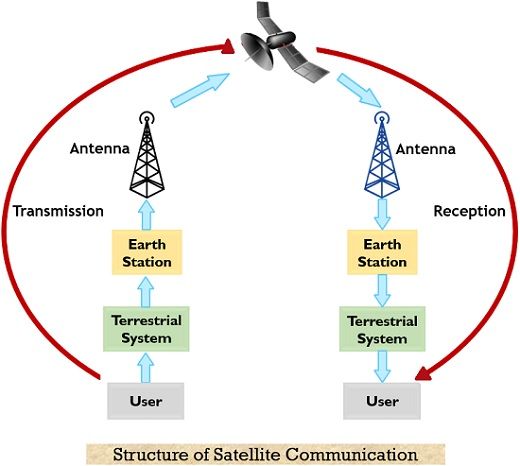 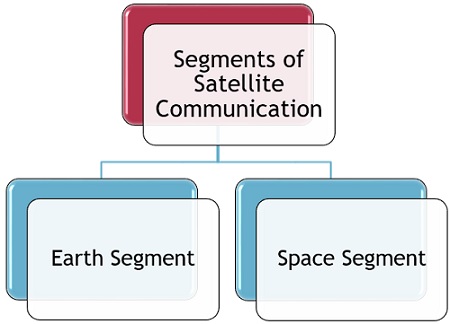 The space segment is responsible for serving the specific ground segment. The characteristic that each segment possesses relies on the type of service required to be provided and the respective application. The user which is a part of the ground segment generates the baseband signal which can be voice, data, audio, video, etc. and this signal is to be transmitted at the other end.

The earth segment contains the user station with the required terrestrial network and antenna unit. By the use of an antenna unit, the signal is sent towards the satellite orbiting in space. The TT&C system is a crucial part of the user station. TT&C stands for tracking, telemetry, and command system. The motion of the satellite in space is controlled by the earth-based station. The TT&C is responsible for the same. It provides the necessary management and control required by the spacecraft to keep it in the desired orbit.

To achieve this, the TT&C system links the earth-based station and satellite together however, this link is different from the user link that connects with the satellite for signal transmission and reception. The control signals generated by the TT&C system are of a different frequency than that of the actual information signal so that the two must not interfere with each other.

The link that forms a connection from the user station to the satellite is known as uplink.

Satellites constitute the space segment which includes satellite transponders, power systems (Solar Panels for providing excitation), propulsion systems (such as rockets to propel the satellite), thrusters, etc. The transponders are nothing but the units that are responsible for both the transmission and reception of signals within the satellite. It receives signals coming from the ground station and after necessary processing, retransmits it towards other ground stations.
The power to the operation of the satellite is provided either by solar panels or batteries (in the case of eclipse). The propulsion system helps in maintaining the satellite in the correct orbital position according to the information obtained from the ground terminal.

Thrusters are in-built units present in the satellite used for occasionally adjusting the position of spacecraft. The process by which a satellite is maintained in the correct orbital position is known as station-keeping. The link from satellite to earth station is called the downlink.

Thus, whenever, information is required to get exchanged between one station to another or broadcasted from one station to various others, then the transmitting station makes use of a ground-based antenna through which the signal is sent to the satellite orbiting earth. This signal is then retransmitted towards the ground by the satellite and the desired station receives the amplified signal from the satellite.

In various communication-related activities like Television, email and internet services, etc. It is also used in remote sensing and earth observation applications. Various military applications make use of satellite communication, for short-range information transmission or in detecting the enemy camps, etc. Along with these, one of the major applications includes meteorological surveys to study different weather conditions and atmospheric contents.