The permissible frequency range in the case of sky wave propagation lies between 3 MHz to 30 MHz.

Basically the electromagnetic waves in the range of 3 to 30 MHz get reflected by the ionosphere. However, the signals with frequency beyond 30 MHz despite undergoing reflection get penetrated. So, due to this reason, sky wave propagation is suitable only for this particular range of frequency.

Why do we need Sky Wave Propagation?

It allows the propagation of electromagnetic waves of higher frequency from one end to another at a larger distance than ground wave propagation. And it does so by reflections of the wave from the ionosphere. Thus sometimes referred to as ionospheric wave propagation.

The figure below represents the structure of the ionosphere: 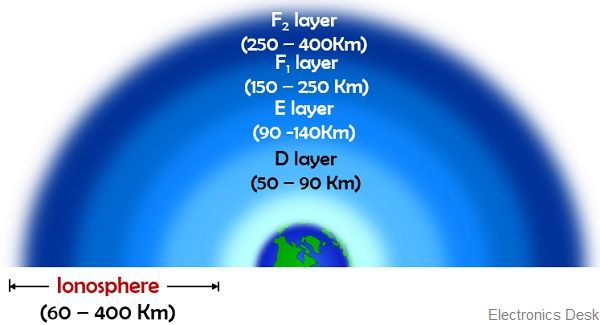 What is Sky Wave Propagation?

Till now we have discussed that electromagnetic waves propagate through the ionospheric region in order to get transmitted over larger distances. Let us now understand, how sky wave propagation takes place.

We have recently discussed that the ionosphere is composed of 4 different layers and each layer consists of a different number of atoms. The outmost layer has the lowest number of atoms while the innermost layer of the ionosphere is highly dense. The reason behind this is that the atmosphere of earth is denser towards its surface and becomes rarer on proceeding upwards.

We are already aware of the fact that the sun emits powerful cosmic rays. So, due to less number of neutral atoms in the outermost layer, most of the cosmic rays penetrate the inner surface of the atmosphere without even interacting with the atoms present there. However, as the inner layer is slightly denser than the outer one so here interaction between cosmic rays and atoms takes place.

Moreover, this interaction between cosmic rays and the atoms increases tremendously in the E layer of the ionosphere, as this layer has a greater number of atoms. But on penetrating to such a level inside the earth’s atmosphere, the intensity of the cosmic rays reduces to a large extent. Hence very few cosmic rays interact with the innermost layer of the ionosphere although this layer is denser than other layers. This is clearly shown in the figure given below: 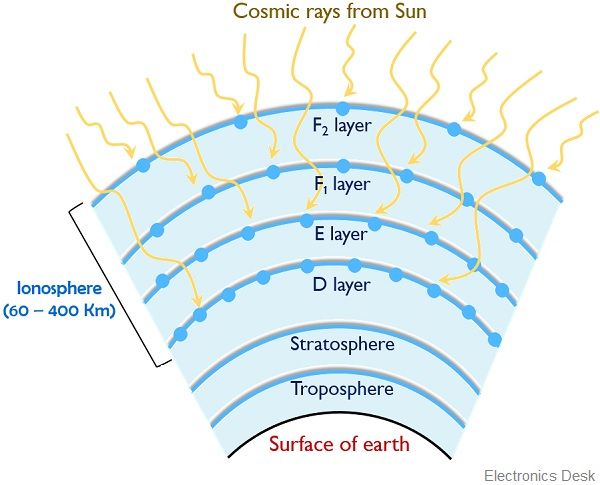 So, when cosmic rays interact with the atoms present in the ionospheric layers then electrons are emitted from the valence shell of the atom. Thus ionization takes place. And as interaction is higher in the case of middle layers of the atmosphere, therefore, ionization will be higher in that layer itself.

Thus it holds the maximum number of charged particles.

We know that electromagnetic waves are composed of electric and magnetic fields. Also, the charged particles present in the layers of the ionosphere have their own electric field. So, when EMW is allowed to be propagated through the earth’s atmosphere then the field of the EMW and the charged particles interact with each other. And this leads to cause reflection of the electromagnetic wave by the atmosphere.

More simply we can say this as TIR taking place in the atmosphere.

In a similar way when the transmitting antenna transmits the electromagnetic wave with a certain angle (equal or greater than critical angle) then due to ionization on the earth’s atmosphere it gets reflected back towards the surface of the earth. This causes the reception of the reflected signals by the receiving antenna. 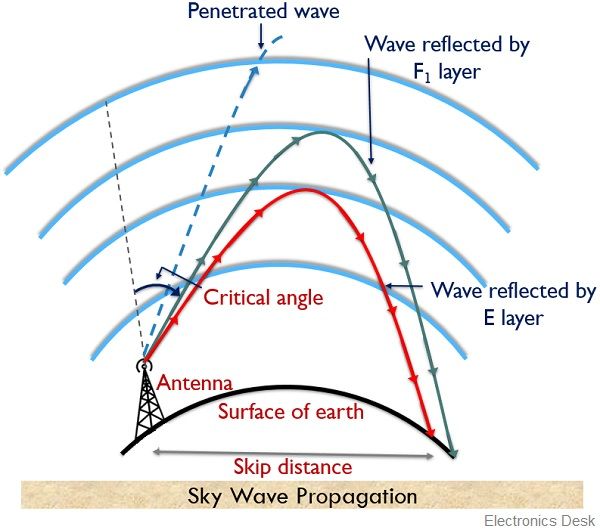 It is to be noted here that the field in the atmospheric layer must be sufficiently large so that it can allow reflection of the electromagnetic waves through it. This is so because it may be possible that a high-frequency wave may not be reflected by the lower region of the ionosphere.

However, with upward movement, even the high-frequency wave will get reflected due to a higher degree of ionization.

It is given by: