Here in this article, we will understand how waves are propagated from an end to another using ground as a medium.

What are electromagnetic waves?

These waves hold the ability to propagate with the speed of light (i.e., 3*108 m/s). The basic feature possessed by an electromagnetic wave is that the electric and magnetic fields are mutually perpendicular to the direction of propagation.

The figure below shows the wavelength distribution of various electromagnetic waves: 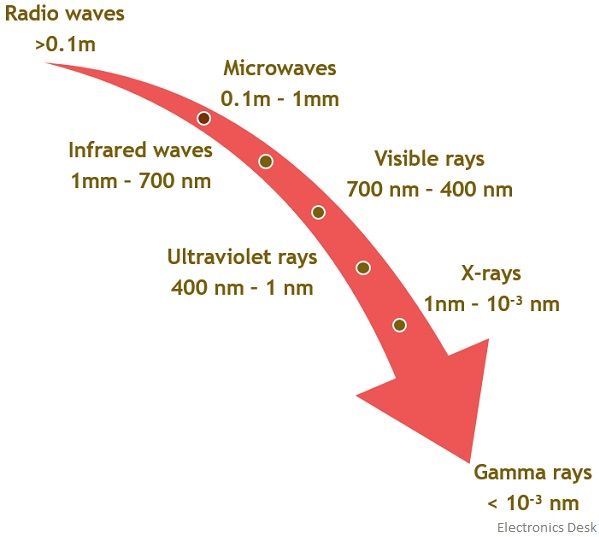 What is wave propagation?

We have already discussed the basics of the antenna along with its mechanism of operation in our previous article.

Here in this article, we will discuss ground wave propagation.

What is Ground Wave Propagation?

The name itself is indicating that in the ground wave propagation, the electromagnetic waves are propagated from an end to the other through the surface of the ground by gliding over it. 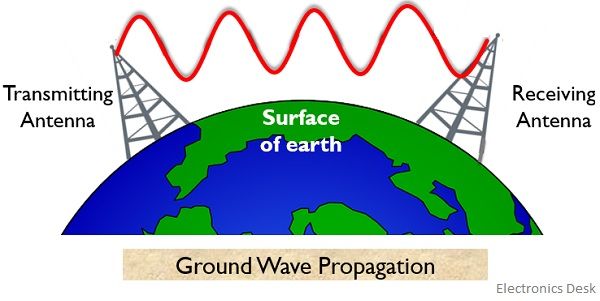 In the above figure, it is clearly shown that two antennas are placed on the surface of the earth. We have already discussed in the beginning that ground wave propagation allows short-distance operation. Thus the transmitting and receiving antennas must not be present at a very large distance with respect to each other.

This is represented in the figure shown here: 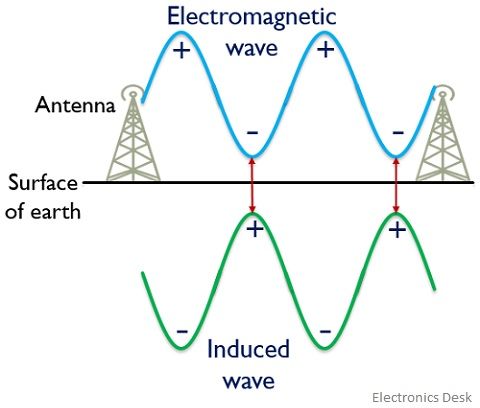 As we can see that the induced wave is opposite in phase with the actually transmitted electromagnetic wave. So, this causes neutralization of charges that resultantly cause a reduction in the magnitude of the field with distance.

In other words, the same principle can be said in a way that the number of charges varies according to the intensity and location of the field and the flow of charges generates a current. When current flows through the surface of the earth it behaves as a leaky capacitor. And so while propagating, some amount of energy gets absorbed that causes the weakening of the transmitted wave. The energy absorbed by the surface of the earth leads to cause loss of power which is due to the resistance offered by the surface to the flow of charges.

And as a part of the signal is getting attenuated while transmission, thus higher the distance greater will be the attenuation. Therefore, ground wave propagation is suitable for only a short range of propagation distance.

Now the question arises that why we are using ground wave propagation for only low frequencies and not for the higher ones. So the reason for this is to have the least attenuation because the high-frequency signal attenuates faster. Let us understand this:

We know that electromagnetic wave propagates with the speed of light in free space. Also,

As we can see that frequency and wavelength are in an inverse relationship with each other. Thus higher the frequency lesser will be the wavelength and vice-versa.

We are also aware of the fact that bending angle, θ is directly proportional to wavelength, λ. Thus higher the wavelength, the greater will be the bending, resultantly causing less amount of distortion in the presence of an obstacle. As low-frequency waves will possess a higher bending angle thus lower attenuation. But the attenuation will be higher when the frequency is high because in this case, the wavelength is small. So, we can say that waves of greater wavelength bend more efficiently hence ground wave propagation is suitable for low-frequency operation.

Ground wave propagation finds its applications in various fields like television signal broadcasting, target detection for military purposes, radio signal transmission, and in all such applications that require a distance of operation in the local range.