Definition: V antenna is a type of long wire antenna whose structure is designed in the form of a V. This is the reason it is given the name V antenna.

It operates in the high-frequency range between 3 to 30 MHz.

Basically, it is said to be an enhanced version of a long wire antenna that provides higher gain and directivity than long wire antenna. It is generally a resonant antenna that provides bidirectional radiation. However, proper impedance matching leads to provide a non-resonant antenna also that produces unidirectional radiation.

We have already discussed previously that in long wire antenna the length of the conductor is generally greater than half wavelength. More specifically, the length is in the multiple of λ/2.

This tilted antenna offers high gain and directivity and is used for fixed frequency use in the high-frequency band.

A V antenna is a combination of two long wire antennas that are joined in the form of a horizontal V structure. The excitation to this antenna is provided at the apex using feed lines. And the two wires of the V antennas are referred as legs.

The figure below shows the structure of V antenna: 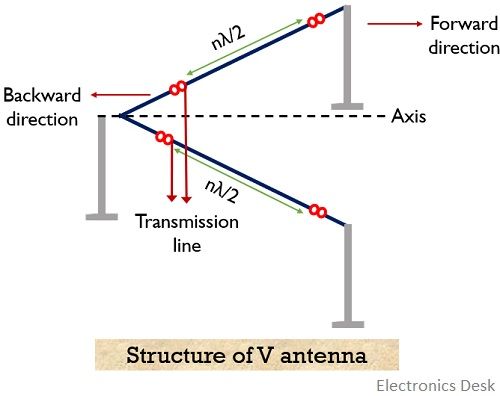 The arrangement shown above is resonant type V antenna as the two ends of the antennas are non-terminated.

As we can see here that the feed line to the antenna is provided at the joining angle of the two legs. This angle is known as apex. It is denoted by α. 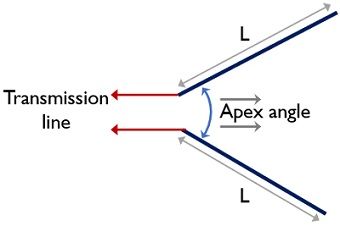 In comparison to a single long wire antenna, the gain offered by it is 2 times more.

When a V antenna is excited at the apex then due to the externally applied sinusoidal signal, the charge carriers experience attraction and repulsion according to the polarity.

This cumulative action of the charge carriers gives rise to the varying electric field. Thus, the signal from an end to the other is radiated through the legs of the antenna. 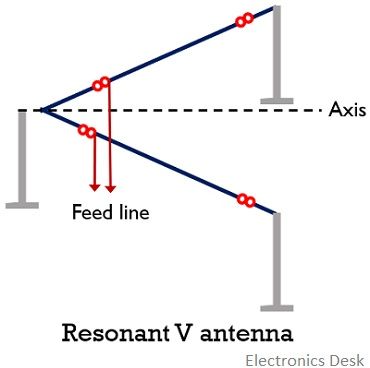 A crucial point to discuss over here is how the two legs of the antenna are excited to have high directive gain.

So, basically, while providing excitation to the antenna, the two legs are excited with signals that are 180° out of phase. This will lead to provide high gain and directivity.

The reason behind this is that when the apex is two times the angle of the cone of maximum radiation of each wire in the axial direction. Then the two cones will produce summed up result along the axis, bisecting the apex of the V antenna.

Therefore, in this case, the maximum lobe of radiation will be produced. And in this way, this antenna provides high gain and directivity. This is so because the radiation of each leg that is directed in the opposite direction will get cancelled out and those directed in same directions will get added up.

Thus, with the increase in the length of the legs of the antenna, the directivity and gain will also improve.

Till now we have discussed the resonant type of this antenna that provides bidirectional radiation pattern.

However, in order to have a unidirectional radiation pattern, we can have a non-resonating V antenna. A non-resonant type can be formed by terminating the legs of the antenna with resistive load with a value equal to its characteristic impedance.

The figure below shows the non-resonant V antenna: 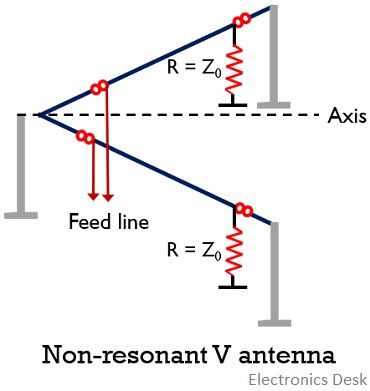 The figure given below is representing the radiation pattern for the resonant type of V antenna: 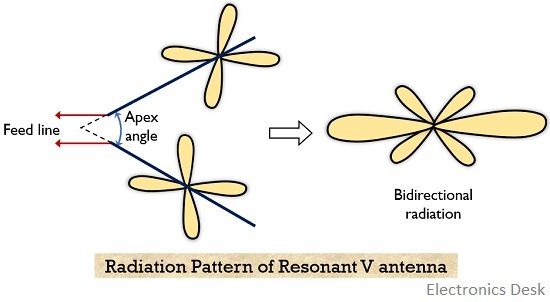 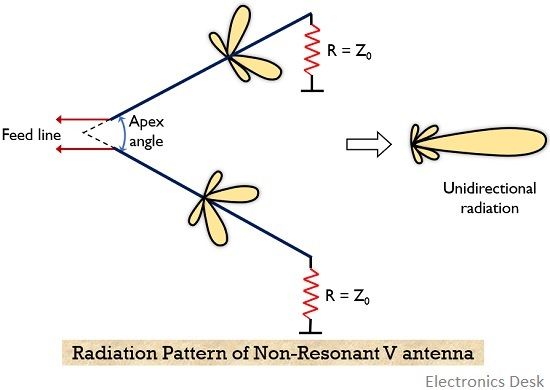 Previously, we have also discussed antenna array and various type of antenna arrays. There we have seen that to enhance the directivity multiple antennas are arranged to form a single system.

Likewise, the directivity of V antennas might also be increased by arranging to form an array. So, in this array, the elements will be only V antenna.

In the case of a vertical arrangement, the two or more antennas can be stacked one above the other. While in a horizontal manner these can be arranged in broadside.

A noteworthy point over here is that no reflector is used in case of the array with elements as V antenna.

These antennas have their maximum applications in radio communication for commercial purpose. Also, their high gain and directivity support long-distance communication at a fixed frequency.