Antenna Array is defined as a radiating element formed by arranging various individual antennas in properly spaced and phased manner. An antenna array acts as a single element that which is used to transmit and receive RF waves.

The various individual antennas that are configured to form an antenna array are known as elements.

Arranging multiple antennas as an array to form a single system is a common method to combine and form a single radiator. This provides greater directive gain.

It is to be noted here that antennas in the array must be properly spaced and in proper phase so that the independent contribution of each antenna in the configuration in the same direction gets added up. While it gets cancelled out in rest all other directions.

This leads to improving the directivity offered by the system.

An antenna configuration formed by arranging the elements in a straight line at equal distance from each other is referred as a linear antenna array. 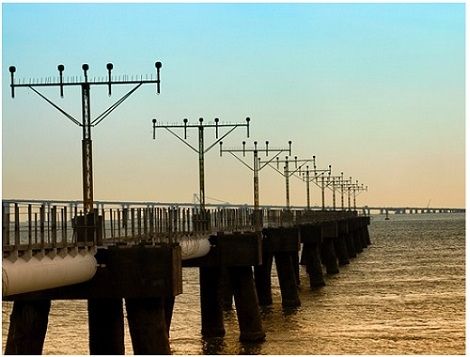 Furthermore, if all the elements are excited with the current of same magnitude having a consistently growing phase shift along the line then it is known as a uniform linear array.

A noteworthy point over here is that the overall field generated by the system at a distance is the vector sum of fields generated by each antenna in the array. While the phases of each field component rely on the adjacent spacing between the elements and the direction.

Why do we need an antenna array?

Previously we have discussed various types of antenna along with their radiation characteristics. We know that a small linear antenna offers non-uniform radiating field in the direction normal to the antenna axis. The non-uniform radiation pattern suitable for the applications related to broadcasting.

So, in case of large distance if attenuation is also high then it may be possible that the signal fails to reach the other end with the required strength.

This is the reason, why high gain antennas are required. However, sometimes the gain of a single antenna fails to provide adequate transmission by overcoming the attenuation.

This is the reason the antenna array is used.

We have already discussed that an antenna array is a combination of multiple antenna elements. Generally, a multi-element array uses a half-wave dipole antenna. However, the length is not actually an electrical half wavelength as there is around 5% variation in the length that is permissible as this does not hinder the radiating properties of the elements. 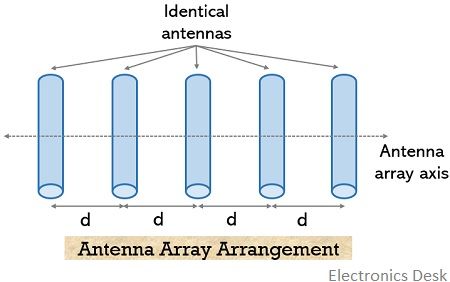 It is known to us that a half-wave dipole antenna has omnidirectional radiation pattern thus the waves are radiated over a wide-angle. So, to increase the ability of such antennas to radiate specifically in one direction, these are arranged in the form of an array.

Thus, multiple elements are placed apart with proper spacing and are excited simultaneously by providing current with proper phase.

Now the question arises what is current of proper phase signifies in the antenna array?

So, basically in an antenna array, the currents in the different elements are said to be in phase if it attains maximum value on flowing through the same direction at the same instant of time.

Hence when the elements are fed with the current of proper phase then the spherical waves from each element of the array superimpose due to interference and generates a plane wave, which is a beam of the radio wave.

So, if the waves emitted from the elements are in phase then they added constructively, giving rise to an increase in the radiated power. While, if the emitted waves from the individual elements are not in phase then they added destructively hence cancelling out each other. This leads to cause a reduction in the radiated power.

In this way, the radiations emitted from the elements that are in phase add up and provide a directional beam that has high strength and can travel to longer distances.

Therefore, an antenna array generates a radiation pattern having major lobe that indicates strong beam in one direction along with some side lobes that shows the radiation spread in an unwanted direction.

Types of the antenna array 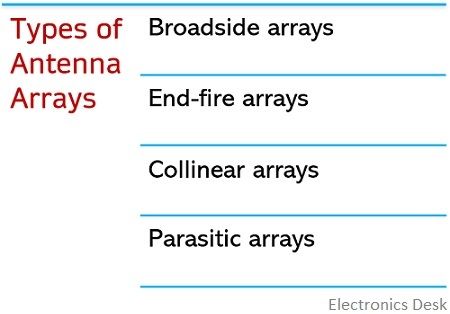 These find major applications in the communication field where high signal strength is needed for long-distance transmission and reception. Hence, is generally used in satellite and wireless communication along with military and radar applications as well as astronomical study.