Definition: Sudden Ionospheric Disturbances generally abbreviated as SID is a type of ionospheric abnormality which is a result of solar flares. Basically solar flares cause an abrupt increase in the ionization density in the D region of the ionosphere. Thus it is said that SID is an outcome of solar flares.

SID basically causes absorption of high-frequency signal that is propagated from the ionospheric region of the atmosphere. Thereby causing complete blackout for VFL transmission. It was initially observed by Mongel and Dellinger in the year 1935.

So, we can say the perturbation or variation in the electron density of the ionosphere is known as Sudden Ionospheric Disturbances.

What are Solar Flares?

Solar flares are defined as the occurrence of bright spots on the solar disc. It is said to be a sudden event that causes variation in the brightness of the sun.

Basically, due to the rotation of the sun, magnetic field lines from the sun get tangled and crossed. This gives rise to the gigantic emission of hydrogen from the sun. More simply we can say, that solar flare is the emission of magnetic energy that is stored in the solar atmosphere.

It is to be noted that solar flare is generally a sudden and unpredictable event that occurs more in the duration of peak solar activity. Due to solar flares, x-rays and extreme UV radiation is emitted by the sun towards the earth.

The energy that gets emitted by the sun is so high that it matches the energy level of the explosion of millions of nuclear bombs. In the case of solar maximum, various solar flares can occur in a single day. While in the case of solar minimum, the frequency of occurrence gets reduced to even less than one per week.

We have already discussed in sky wave propagation that the ionosphere is composed of 4 different layers that are extended up to 50 to 400 km above the surface of the earth. 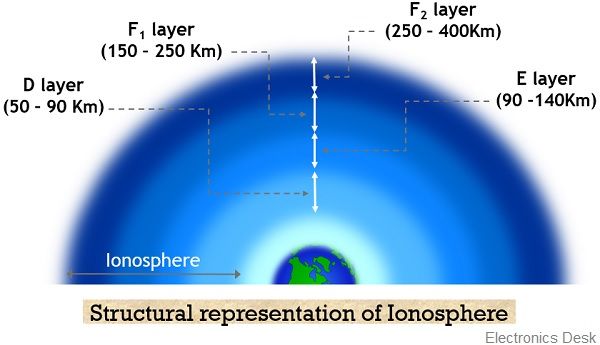 The different layers of the ionosphere allow the radio waves to propagate from an end to another by getting reflected from these layers.

In the ionospheric region of the atmosphere, the ionization density is maximum in the E region. This is so because the interaction of cosmic rays with the atoms is maximum in that particular region.

Generally, the electron density in the D layer is low as compared to other layers in the day time. While almost negligible in the night.

Till now we have discussed that the occurrence of solar flares causes SID in the ionospheric region of the atmosphere that causes interference in the telecommunication system.

Let us now see how these solar flares put effect on the high-frequency signal transmission.

Basically we are aware of the fact that in normal atmospheric conditions, the electron density of the E region is highest among all the layers of the ionosphere.

Thus when a high-frequency signal is allowed to be propagated then the field of the charged particles interacts with the field of the transmitted signal. This leads to cause reflection of the signal back towards the earth and thus the signal gets received by the antenna at the other end on the surface of the earth.

However, at the time of solar flares, a large amount of X-rays radiation gets released from the sun. This tremendously increases the ionization density of the D region of the ionosphere.

So, this resultantly causes a rise in the absorption of high-frequency signals as well as an increase in reflection of atmospheric noise.

The lasting duration of such blackouts in the atmosphere exists between a few minutes to an hour. Though it occurs everywhere at the same time in the sunlit parts of the globe, it is more severe in the equatorial region where the sun is generally present overhead.

The blackout of radio waves due to solar flares is a very common weather phenomenon. It is noteworthy here that the energy emitted at the time of flares propagates with the speed of light and travels down the earth in nearly 8 minutes.

So due to such blackouts radio wave communication gets seized and can be re-initiated only when the flare gets completely absent.

Now the question arises, how the recording stations get the idea about the occurrence of solar flares?

So, to determine the spatial effect of solar flares, the signal level received from various stations is compared.

It is noteworthy that SID is an ionospheric phenomenon that specifically occurs in the D region rather than E, F1 or F2 as the air density in these regions is relatively low. These high-intensity UV rays penetrate the upper layers of the ionosphere and severely enhances ionization in the D region.