Hence we can say that the impedance provided by the antenna at its input terminal is known as antenna impedance.

We know that when a certain voltage is provided to any transmitting antenna then it generates current by following ohm’s law.

Here R represents the resistance of the input terminal of the antenna.

Further on considering the imaginary part, we will have

So, if we have a transmitting antenna that is radiating some power then impedance Z will be present behind it. This is known as the impedance of the antenna.

This impedance is a merger of resistance and reactance thereby forming a complex value.

Suppose we have an antenna with input terminals x and y: 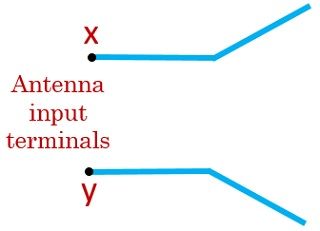 The power radiated by the input terminal of the antenna is given as:

Since the total input power is the sum of radiated power and power loss,

Thus we can write it as:

This is so because all the supplied power is not radiated as some amount of power is lost.

Hence the radiated power will be:

While loss / dissipated power will be:

On substituting the obtained value of Pr and PL in eq 1, we will have:

Also putting the value of Pin we will have

As the total current will be the sum of radiation current and loss current. Therefore writing the above equation as:

Thus we can say that the input resistance will be the sum of radiation resistance and the loss resistance. Therefore the figure below represents the input impedance of antenna:

Derivation of supplied power to the Antenna

Suppose we have a configuration given below:

Here the two input terminals x and y of the antenna are connected across a generator.

We know that the impedance is given as:

So, drawing the equivalent circuit of the generator antenna configuration given above: 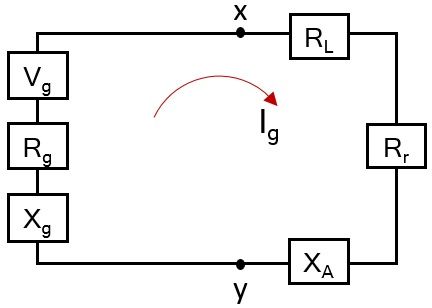 For transmitting antenna, the impedance will be given as

The resistive part of the antenna which we have already derived is given as:

Let us now consider the Thevenin’s equivalent circuit shown above in order to determine the power delivered to Rr for radiation and the power dissipated in the form of heat in RL.

So, firstly we need to determine the current within the loop itself,

Here Vg is the maximum generator voltage while Zt denotes the total impedance present in the loop. Thus

Therefore, we will have

So, considering the magnitude form

Thus we can say the radiation power Pr will be

So, on substituting the value of Ig

Also, the power dissipated on the internal resistance of the generator will be given as:

The condition of maximum delivered power to the antenna is achievable in case of conjugate matching. This means

So, we will have 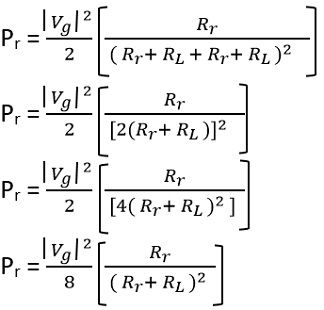 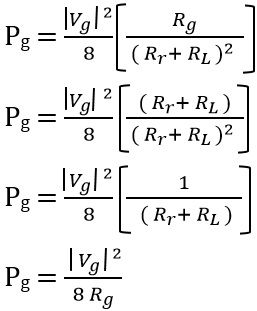 It is noteworthy here that the generated power must be equal to the sum of radiated power and the dissipated power in the form of heat.

The supplied power by the generator