Definition: An instrument that is used for the analysis of the frequency spectrum of the input signal is known as a spectrum analyzer. It uses frequency domain representation of the RF signals in order to show the relative amplitude level of the signal at various frequencies within a particular range.

A signal which shows the plot where the vertical axis represents the amplitude. While the horizontal axis indicates the frequency is known as frequency domain representation.

What is Spectrum Analyzer?

This test equipment is majorly used in designing, testing and maintaining RF circuitry. 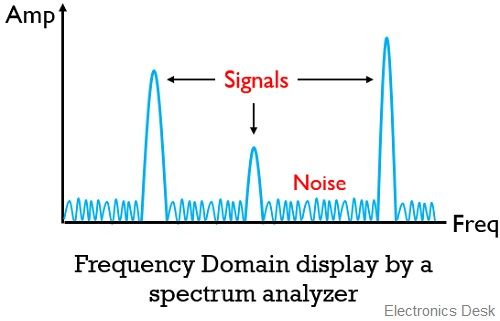 The use of a logarithmic scale on the vertical axis allows judgement of large differences in amplitude of various signals.

We know in the wireless communication system; the signal is transmitted from an end to another. This signal is nothing but the message which is required to be sent to the other end for communication to take place.

However, during transmission, the signal gets degraded. This degradation in the signal level is mainly due to the introduction of noise in the communication channel as well as the receiver. Thus we can say, noise interferes with the signal and deteriorate the quality of the signal.

The introduction of noise in the signal leads to limit the range of transmission and the effectiveness of measuring the signal at the receiver. This causes the result to fluctuate from its original value.

Basically, the addition of noise during transmission can be in two ways i.e., internally and externally. This leads to classifying noise as internal noise and external noise.

So, analyzers or spectrum analyzers are used for the quantitative assessment of signals and distortion because of noise during transmission between the two antennas.

Suppose for an input signal of 2 MHZ, the analyzer sweeps across the complete 2 MHZ frequency band in order to have the complete frequency domain analysis.

The figure below shows the block diagram representation of a spectrum analyzer with digital display: 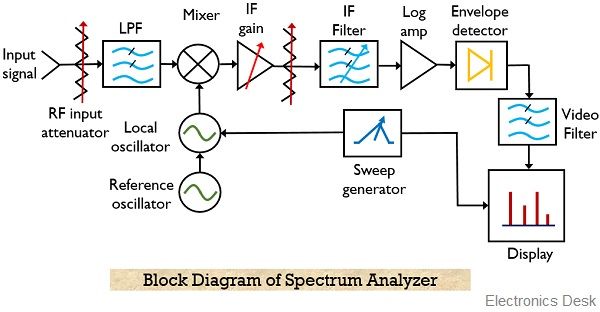 As we can see the spectrum analyzer is composed of components like RF attenuator, mixer, IF filter, detector, sweep generator, local oscillator and display unit.

So, let us now understand the operation performed by each block individually.

Thus to provide a signal of appropriate level RF attenuator is used. It is set automatically based on the reference level, however manually setting the value is also permissible. Hence we can say it acts as the protective circuit for the system.

Some systems use, a pre-selector rather than LPF. This pre-selector serves the purpose of the bandpass filter by rejecting all the other frequency components and permitting the desired frequency only.

However, the difference between the two frequencies is the intermediate frequency which is utilized by the analyzer.

It is designed in coupling with the input attenuator so as to avoid variation in reference level with the change in applied input.

With the reduction in RBW, the selectivity gets improved along with signal to noise ratio. However, this causes a reduction in the sweep speed.

For the detection of signals having noise components, mostly normal mode also known as rosenfell mode is used. This is so because on experiencing, sudden rise and fall in the signal level, the detector assumes it to be noise and makes use of positive and negative detection alternately.

However, a continuous rise in signal level corresponds to the original signal thus positive peak detection mode is used.

We have already discussed that the spectrum analyzer displays the signal and noise component on the screen. So, if the noise content is higher, then it will be more difficult to study the signal. However, the change in video bandwidth causes a reduction in peak to peak variations in noise components.

Thus by using this, actual signals can be obtained with a higher noise component.

Along with this, the video signal is sampled using ADC in synchronization with the sweep generator.

As already the relationship between the input signal and local oscillator is known, thereby permitting the calibration of the x-axis in terms of frequency. This leads to creating the frequency domain on the horizontal axis.

Hence from this discussion operation of each block can be combined to have the overall working of the spectrum analyzer.

Initially, the signal to be analyzed is provided to the RF attenuator which sends the optimum signal to the mixer. The mixer combines the input signal and the signal received from the local oscillator to generate a signal of intermediate frequency.

The synchronization between the sweep generator and LO provides the frequency response.  This leads to producing, amplitude vs frequency plot at the LCD display of the analyzer.