In the previous article, we have discussed that antenna measurements correspond to the analysis of various parameters of the antenna to get the idea about the performance of the antenna. For this purpose, AUT is considered in conjunction with a source antenna that helps in determining system performance.

Previously we have seen that on an experimental basis, the antenna measurement is categorized as impedance measurement and pattern measurement.

A noteworthy point over here is that in case of highly directional antenna such as horn, the pattern measurement is done by scanning the region parallel to the side where the horn is facing up to a certain distance.

However, in this article, we will discuss the total spherical pattern measurement desired for a general class of antenna.

The major lobe of the antenna pattern represents the direction where there is maximum radiation. While the minor lobe corresponds to all other directions of the pattern and the minor lobes are also known as side lobes.

Thus, to accomplish this, the various angles in space must be specified. Generally, the space antenna is considered to be present at the origin of the spherical coordinate.

Let us discuss this more under the measurement procedure section.

We know pattern measurement setup must necessarily have two antennas. One is the antenna under test referred as a primary antenna while the other is the secondary antenna. And as the system follows reciprocity theorem so the radiation pattern will be the same for both the antenna thus out of the two any one of them can be the transmitting antenna while the other will be the receiving antenna.

Basically, there are two fundamental procedures for measuring the radiation pattern of the antennas. Let us understand each one separately.

Generally, the primary antenna is the transmitting one while the secondary is the receiving antenna, but this condition is not necessary for the measurement to take place and this we have discussed above recently.

Further, at a different point on the circular path, the field strength and direction of the secondary antenna with respect to the primary one is noted down.

This helps in plotting the radiation pattern of the primary antenna in either rectangular or polar form.

The figure below represents the radiation pattern measuring setup: 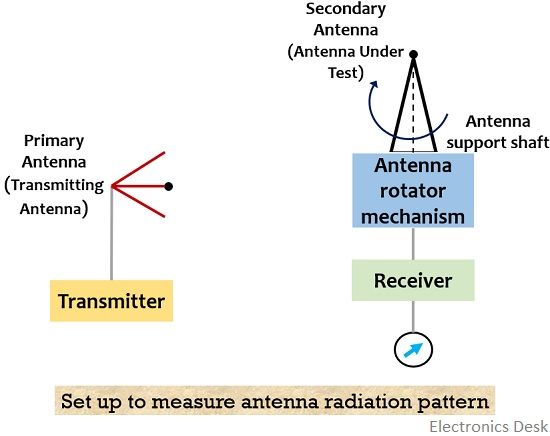 Here as we can see that the transmitting antenna is fixed while the test antenna is placed on a rotating shaft as this will help in rotating the antenna through rotator mechanism.

Sometimes by making use of pattern recorder even with the continuous rotation of the test antenna, the readings can be recorded. In this case, the antenna rotation is in synchronization with the motor-generator units.

The two major requirements of pattern measurement are as follows:

1. Distance: When we talk about the distance requirement then in order to get the desired far-field pattern, a sufficiently large distance must be maintained between the two antennas. This is so because if the distance is small then we will get near field pattern of the antenna.

However, for accurate pattern measurement, the plane wavefront must illuminate the antenna under test and only in case of sufficiently large distance, plane wavefront can be achieved.

Therefore, the distance between primary and secondary antenna should be specified as:

: r is the distance separating the two antennas,

λ is the wavelength and

d is the maximal linear distance of any of the antenna

The above equation is obtained on the basis that the difference in phase between the centre and the edge of the test antenna must not be greater than λ/16.

2. Uniform Illumination: Along with a properly large distance, to get accurate field pattern, the plane wave produced by the transmitting antenna must possess a uniform amplitude and phase over the complete distance of separation.

Here the reflections from the ground, buildings, trees, etc. must be greatly avoided.

Thus, from the above discussion, we can say that the pattern measurement of the antenna relies on the field strength of the antenna wrt direction. However, the distance and illumination requirement must be properly considered.