Definition: A radio wave propagation technique that allows the transmission of UHF and VHF electromagnetic waves through the region near the tropospheric layer of the atmosphere is known as duct propagation. Basically in duct propagation, despite being reflected from the ionosphere or gliding over the surface of the earth, the waves propagate from an end to another by undergoing successive refraction from the troposphere.

Duct propagation is sometimes referred as super refraction. It allows the propagation of the signals beyond the horizon. This means that, unlike surface wave propagation, it permits the signal transmission without assuring the need for having a line of sight distance between the two antennas.

Due to high frequency, the signals in the troposphere require an obstruction-free path as wavelengths of such high-frequency signals are short. Thus this mode of propagation limits the range for signal transmission. So, for UHF and VHF signal transmission to an even greater distance, the duct present in the tropospheric region of the atmosphere is utilized. This duct acts as a channel to guide the high-frequency wave to the other end by successive refraction. Hence is referred as super refraction.

What is an atmospheric duct?

The atmospheric duct is the region or layer present in the lower atmosphere, which is a result of temperature inversion. The duct behaves as a waveguide in the atmosphere and guides the radio waves along the curvature of the earth thereby allowing the spreading of wavefronts in a horizontal manner only. 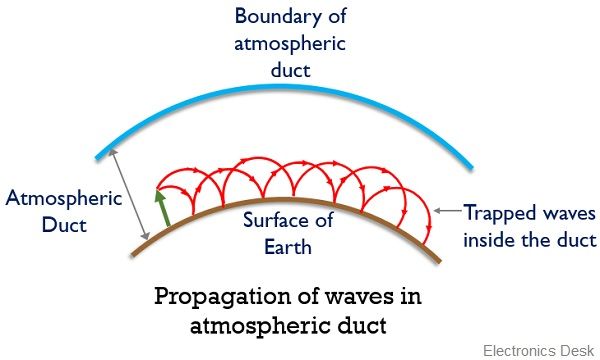 What is temperature inversion?

As we have already discussed that stratopause is the region present next higher to troposphere.

The reason behind this is that the air is of turbulent nature, also there exist different layers of air. These multiple layers of air contain different water vapor contents thus different temperatures. So, the property of significantly having a decrease in temperature with height gets failed to be achieved. This leads to cause the development of an unusual situation in the atmosphere, where a layer of warm air exists above the cool air.

This is known as temperature inversion and this gives rise to the phenomenon of super refraction in the atmosphere.

What is Duct Propagation?

Duct propagation is the phenomenon of transmitting UHF and VHF signals to longer distances. We have already discussed that the presence of a layer of cool air between warm air, generates a duct that guides the high-frequency signals inside it like a waveguide.

Basically, the wave propagates inside a duct by undergoing successive refractions inside it. The change in the refractive index due to warm and cool layers in the atmosphere causes duct propagation. We have understood the unusual atmospheric conditions that cause the generation of the duct. However, for duct propagation to take place, the two necessary conditions are as follows:

As we know that warm and cool airs possess variation in the refractive index. This is due to the variation in their densities. So, when such high-frequency wave emitted from the transmitting antenna in the region of the duct (i.e., cool air) with a low angle of incidence, then on experiencing lower refractive index from the region of warm air due to lower density, the wave gets refracted back to the surface of the earth. 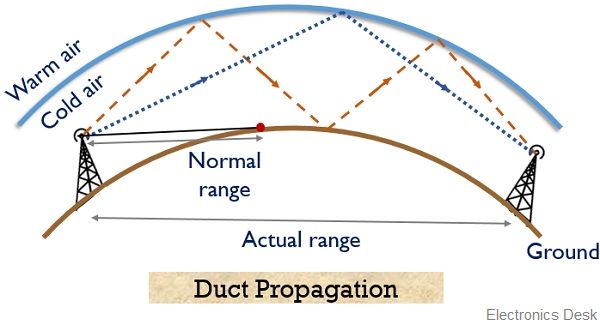 Further, it is known that the air above the surface of the earth has a higher temperature, thus the warm region is present lower next to the duct. So, the wave while propagating through the cool region (having higher refractive index) towards the ground again gets refracted when interacted with the medium of lower refractive index. This sudden variation in the refractive index of the medium is due to the change in the dielectric constant of the atmosphere. This is clearly shown in the figure above.
Due to this reason, the wave undergoes multiple refractions and oscillates between the two boundaries of the duct and received by the receiving antenna. In this way, the transmitted signal gets achieved by the antenna at the opposite end with less attenuation.