Antennas that are designed to reflect the incident electromagnetic waves originating from a separate source are known as reflector antennas. It is designed to operate at high microwave frequency.

These antennas belong to the category that offers high directionality while radiating.

Reflector antennas hold great importance when we deal with signals operating in microwave frequency ranges. Initially, it is in use since the time electromagnetic wave propagation came into existence.

Hertz proposed the idea of electromagnetic wave propagation in the year 1888.

However, these antennas gained their major presence in radar systems at the time of World War II.

We are already aware of the fact that this operates at a high range of microwave frequencies. Also, at this frequency, the electromagnetic wave behaves as a light wave. Hence, it gets reflected when strikes a polished surface.

This is the principle of operation of a reflector antenna.

However, a crucial point over here is that a reflector antenna is a combination of feed element and a reflecting surface.

This means in case of reflector antenna a reflecting surface along with an antenna element is required in order to provide excitation to the reflecting element. This means that it is composed of an active and a passive element.

So, simply we can infer that the feed is the active element while the reflector is the passive element.

It operates in a way that energy from the feed is directed towards the reflecting surface placed at an appropriate position. The reflector on gaining the energy further guides it in a particular direction.

It is to be noted here that high gain antennas operating at microwave frequencies possess such a small physical size that reflector of any suitable shape provides the desired directivity.

Despite offering multiple geometrical configurations, there are some popular shapes in which the reflecting surface of the antenna is formed. And on this basis, the reflector antennas are further classified.

Depending on the geometrical shape possessed by the reflecting surface, the reflector antennas are classified into the following categories: 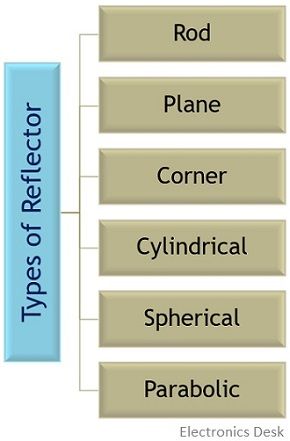 Here the reflector offers inductive reactance so guides the field radiated in the backward direction towards the driven element to reduce the losses due to back-reflected wave. Hence, helps to improve the gain.

It does not serve as an active member of the structure but is a parasitic element.

However, it causes variation in the impedance of the driven element. These types of reflectors exhibit frequency sensitive characteristics.

It is nothing but a plane metallic sheet that is located at a certain distance from the feed. For the incoming radio waves, it acts as a plane mirror and allows them to undergo reflection through it. 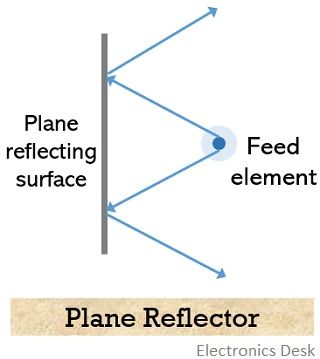 It is to be noted that a plane reflector possesses difficulty in collimating the overall energy in the forward direction.

Thus, to handle the impedance, pattern characteristics, gain and directivity of the system, the polarization of the active element along with its position in reference to the reflecting surface is used. 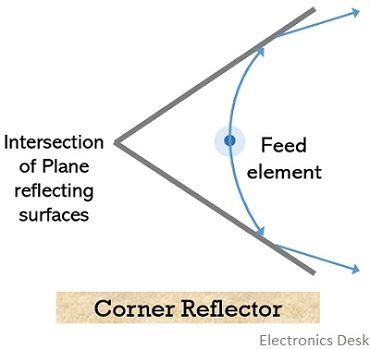 These are basically used to enhance the directing ability of electromagnetic energy in the forward direction so as to reduce the percentage of the back-reflected wave.

This gives rise to a small percentage of minor lobes hence the directivity is improved.

In this reflector, the generally pyramidal or conical horn antenna is used as the feed element.