Definition: Horn antenna is a type of antenna which is constructed when the end of the antenna is flared out or tapered in the shape of a horn. Horn antenna operates in microwave frequency.

These operate in ultra-high and super-high frequencies ranging between 300 MHz to 30 GHz.

It is generally considered as a waveguide whose one of the ends is widened out in the shape of the horn. Due to the flared-out structure of the antenna, there is greater directivity thus the emitted signal can be transmitted to longer distances. 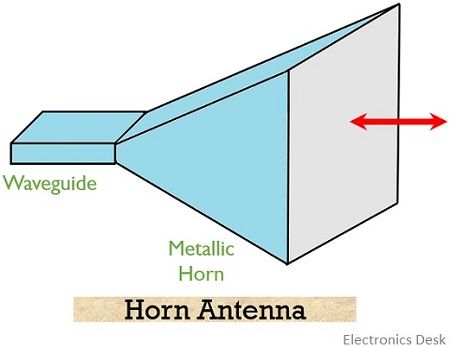 What is a waveguide?

We know that waveguide is a hollow tube that allows energy to get radiated in space when excited at one end and opened at the other.

It is to be noted that the amount of energy radiated by a waveguide is comparatively greater than the two-wire transmission line.

There is no central conductor present in the waveguide and can be either rectangular or cylindrical. It allows propagation of electromagnetic waves from an end to another. These are considered to be high pass filter as permits the propagation of high-frequency signals through it.

Thus, to overcome the disadvantages associated with the waveguide, its end is opened out in the form of an electromagnetic horn. This allows a smooth transition between the waveguide and space thereby offering better directivity to the radio wave.

By terminating the waveguide with a horn-like structure, the discontinuity existing between the waveguide and space, having impedance 377 ohms is eliminated.

This offers the incident energy to be radiated in forward direction thereby reducing the diffraction at the edges. Hence the directivity of the transmitting antenna is improved and with better gain.

To have higher antenna gain there must be a large antenna aperture. And for a given aperture size, high gain is achieved when the tapering is significantly long. Generally, the gain of horn antenna is around 20 dB.

Till now we have discussed that a horn antenna is a modified waveguide that is used for transmission of the signal.

When the traversing field reaches the end of the waveguide then also it propagates in the same manner, however, due to Huygen’s principle now the waves begin to spread laterally. Thus, at the end of the structure, spherical wavefronts are achieved.

Basically, the region is said to be the transition region, where the guided propagation changes to free space propagation.

The flaring not only offers impedance matching but also results in higher directivity and narrow beamwidth thus we get the desired radiation pattern.

Suppose we have an E-plane sectoral horn with a source that radiates cylindrical radiations as shown below: 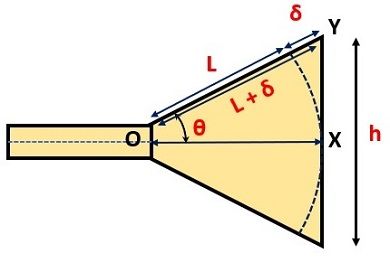 The electromagnetic horn gives rise to uniform phase front having a greater aperture in comparison to the waveguide. Thereby giving rise to higher directivity.

The uniform wavefronts the propagates in outward direction are cylindrical.

It is noteworthy here that as the wave propagates in a different direction from apex to aperture, thus there exist a difference in phase at the origin and the aperture.

Consider the path difference to be δ.

From the geometry of the above figure

Since δ is small thus δ2 can be neglected.

Therefore equation 1 and 2 are the design equations of the horn antenna.

Microwave frequency operations that require moderate gain, use horn antenna. As we have already discussed that for higher gain the dimensions of the horn must be larger. Thus, it is preferred for moderate gain operations.

When we talk about high power gain operations then such applications use lens or parabolic antenna rather than horn antenna.

We know that parabolic reflectors require feeding element to excite them. Thus, the higher directivity offered by the horn antenna allows it to illuminate the reflector. Along with this, these antennas are also used in speed enforcement cameras, so as to avoid reflections that obstruct the desired response.