Antenna Gain Measurement is a crucial aspect of antenna measurement. The reason behind this is that the gain of the antenna plays a very important role in predicting the performance of an antenna.

Due to this reason measurement of the gain of the antenna is necessary.

Previously we have discussed that antenna measurement is done to test the performance of the antenna system.

In impedance as well as radiation measurement we have seen that a test antenna and a source antenna (reference antenna) is considered. Also, either of the two can be taken as transmitting or receiving antenna for the purpose of measurement.

In this article, we will discuss, the measurement of antenna gain.

What is Antenna Gain?

It is defined as the ratio of maximum radiation intensity of the test antenna to that of the reference antenna where the input power is the same.

This means to determine the gain, the actual or test antenna is compared with the reference one.

Hence, in directivity measurement, comparison between two antennas is not taken into consideration.

So, the gain of an antenna with respect to an isotropic antenna:

: G0 denotes the gain of an antenna with respect to an isotropic antenna,

D represents the directivity and

α is a constant that shows the effectiveness ratio whose value lies between 0 and 1.

It is to be noted here that, in high-frequency antennas, the losses are considered to be negligible thereby possessing 100% efficiency. Thus, α =1, so the value of measured gain is almost equivalent to the directivity.

In the previous section, we have seen that to determine the gain of actual antenna a comparison from the reference antenna is required.

So, there are various methods by which the measurement of antenna gain can be done. However, the use of the methods is categorized on the basis of frequency of operation.

Suppose if the antenna is operating above 1 GHz, then its gain is measured by free space ranges. At low frequencies, as the wavelength is longer so free space conditions will not be easily achievable. Thus, between 0.1 to 1 GHz, ground reflection ranges are used.

So, according to these two specified ranges, there are two standard methods used for antenna gain measurement. These are as follows:

Basically, in free space range, the contributions from the surrounding environment of the system get suppressed. While reflection ranges generate constructive interference in the region of the practical antenna.

Here in this article, we will discuss how the gain of the antenna is measured using these methods.

We have already discussed in the beginning that for measurement of gain, a comparison between two antennas is made. Thus, the technique of direct comparison is used.

In this method of gain measurement, comparison between signal strengths of the unknown gain antenna and the standard gain antenna is made.

The figure below represents gain measurement by comparison method: 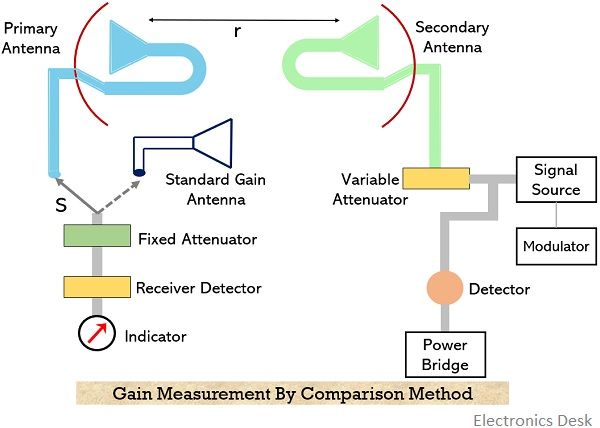 Also, as discussed in the pattern measurement that the distance requirement of the arrangement is such that r≥2d2/λ. So, the distance between the primary and secondary antenna must be properly maintained.

As standard and test antennas are acting as a unit thus to have appropriate matching with the load, an attenuator pad is placed at the receiver input.

Let now see what procedure must be followed to determine the unknown gain through the direct comparison method. The steps are as follows:

So, on this basis there will be two cases:

Case II: If P1 ≠ P2, then the actual power gain of test antenna will be the product of Gp and P1/P2. So, let

On substituting the value of Gp:

As we have discussed in the previous section that the standard gain antenna is the one whose gain is already known or calibrated. However, we can calibrate the gain using two or three arbitrary antennas.

The figure below represents an arrangement of two identical antennas for absolute gain measurement: 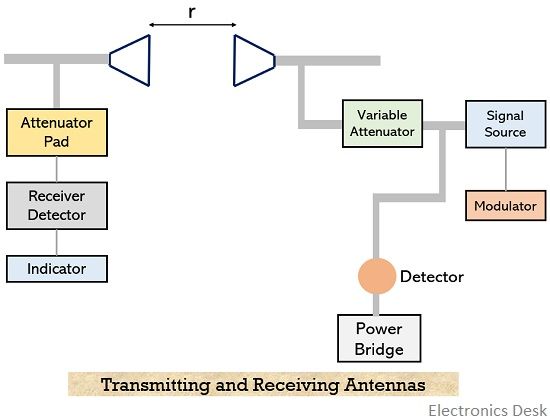 As the two antennas are identical. Therefore,

While if we consider the effect of direct and indirect rays in case of ground reflection then,

: F is the propagation constant due to interference.

From the above equation, it is clear that the power transmitted by the transmitter and received by the receiver is measured, then for the known value of separation distance and wavelength, the gain of either antenna can be determined.

Hence in this way by using any of the above-described methods. The gain of the antenna can be measured.