Definition: An antenna that is formed by etching out a patch of conductive material on a dielectric surface is known as a patch antenna. The dielectric material is mounted on a ground plane, where the ground plane supports the whole structure. Also, the excitation to the antenna is provided using feed lines connected through the patch.

As it is formed using a microstrip technique by fabricating on a printed circuit board thus is also known as Microstrip antenna or printed antenna.

Generally, patch antennas are considered as low profile antennas and are used for microwave frequency applications having frequency greater than 100 MHz.

Patch antenna has 2D geometry. These antennas come in various shapes where its shape is defined by the shape of the metallic patch placed on the dielectric material.

The patches can be rectangular, square, circular, triangular, annular or elliptical in shape.

The figure here represents the top view of the microstrip antenna: 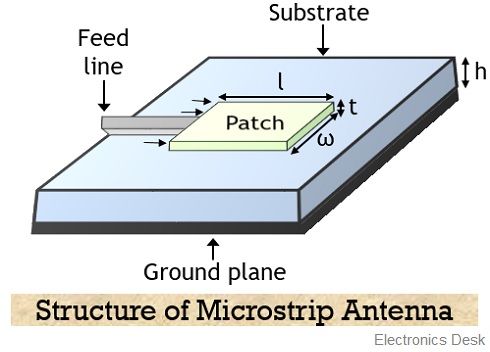 Here we have shown the simplest form of patch antenna where the patch etched on the substrate is half-wavelength long while the thickness of the same is extremely less than λ. Also, excitation to the antenna is provided through feed lines connected to the patch.

Here the substrate which is nothing but the dielectric material is used to separate the strip from the ground plane.

Basically the patch or strip and the feed lines are photo-etched on the surface of the substrate. As we have already discussed that patches can be formed in multiple shapes, however, due to easy fabrication rectangular, circular or square-shaped patches are generally used.

Till now we have discussed a single patch etched on a substrate. But patch antennas can also be formed with a collection of multiple patches on a dielectric substrate. Either single or multiple feed lines are used to provide excitation to the antenna.

A microstrip or patch antenna operates in a way that when current though a feed line reaches the strip of the antenna, then electromagnetic waves are generated.

The waves from the patch start getting radiated from the width side. But as the thickness of the strip is extremely small thus the waves that are produced within the substrate get reflected by the edge of the strip. The continuous structure of the strip along the length does not permit the emission of radiation.

Furthermore, on experiencing a sudden discontinuity in the structure of the patch, radiations are again emitted from the second width side of the patch.

As this discontinuous structure favors reflections, thus the patch antenna radiates only a small fraction of supplied incident energy.

This makes the antenna inefficient, that rather displaying the characteristics of a good radiator, it somewhat acts as a cavity.

The low radiating ability of microstrip antenna allows it to cover the only small distances of wave transmissions like local offices, stores or any indoor locations. As such inefficient transmission is not supportable at a centralized location in an extremely large area.

Generally, hemispherical coverage is provided by a patch antenna at an angle of 30⁰ to 180⁰ at width from the mount.

The figure below represents the radiation pattern of the microstrip antenna: 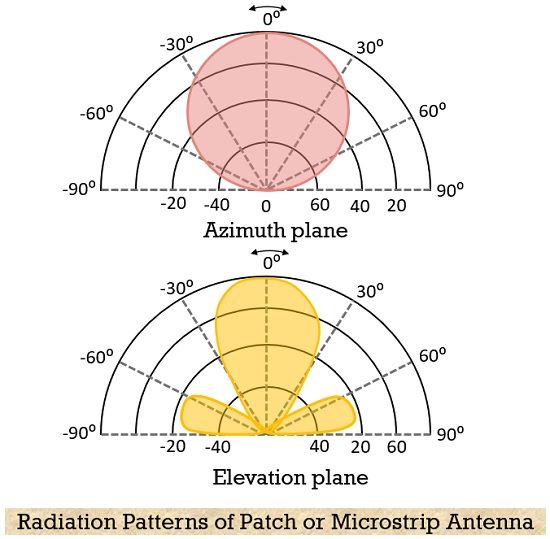 There are various methods through which the microstrip antenna is fed.

However, the classification of feeding methods is done in two ways:

This is all about patch or microstrip antennas.