Definition: A broadband antenna that is designed to provide such electrical characteristics that vary repeatedly in a periodic manner with logarithmic of the frequency of operation is known as Log Periodic Antenna.

This means in this antenna; the impedance and radiation pattern are the factors that are logarithm function of the frequency.

The range of operation offered by this antenna lies between 30 MHz to 3 GHz.

It is a multi-element antenna that offers good directivity over a wide range of frequency of operation.

Basically, the type of antenna that is defined on the basis of angles only, is categorized as a frequency-independent antenna. In such cases, the impedance, as well as the radiation pattern both, do not show dependency on frequency.

This simply means that the impedance and pattern should remain invariable over a range of frequency.

These antennas are said to be a class of antenna rather than simply being an antenna as they possess many different physical appearances. Like, planar, trapezoidal, V slot, zig-zag, dipole etc.

The log periodic antenna is constructed by the use of various half-wave dipole elements with a gradual increase in the length.

The structural geometry of the log periodic antenna is designed in a way that the electrical properties of the antenna must show periodic repetition with the logarithm of the frequency.

In a log periodic dipole array, multiple dipoles of different length and spacing are placed together. Also, the external excitation to the antenna is provided by the use of a balanced transmission line. This transmission line is transposed between the adjacent terminals of the dipole.

The connection of the feedlines is made either at the narrow end or apex of the array.

It somewhat resembles like Yagi-Uda Antenna as it is also a multielement antenna comprising of the half-wave dipole antenna.

The antenna elements are mounted on a single line along with a support boom. However, the way in which the two operate, are quite different.

We have seen that the addition of elements in case of Yagi-Uda antenna, provides an increase in gain and directivity. As against, in log periodic dipole array, the increase in the number of connected elements improves the frequency response or bandwidth that is offered by the system. 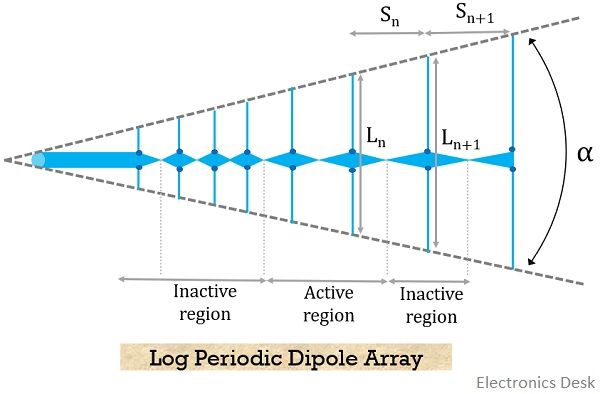 The parameter that defines here the relation between the length of the antenna elements and spacing between adjacent elements is called design ratio or scale factor. This is denoted by τ. It is sometimes referred as periodicity factor, having a value less than 1.

The length of the dipoles (L) and spacing (R or S) between them are related in the following way:

Thus, is given as:

While it can also be written in terms of another constant K, given as:

So, due to this, the two ends of the dipoles will be present along two straight lines, meeting at angle α at one end while converging at the other end of the structure.

This means that we will get similar cycles of variations. This is shown below: 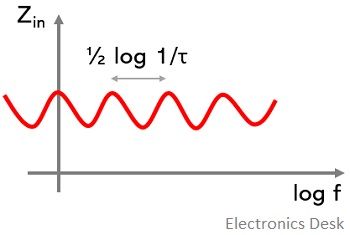 But a point to be kept in mind that, though we have represented sinusoidal waveform over here, it is not necessary that the variation is sinusoidal all the time. This means it’s just that each cycle will be identical to the preceding one.

A log-periodic antenna operates only in the active region rather than the whole structure. The various region of LPDA is classified as:

Also, sufficiently large spacing exists between the dipoles. This is the region which is responsible to provide maximum radiation, by producing large resultant field towards the left and a little towards right.

It is to be noted here that, the frequencies where the length of the longest and shortest dipole is λ/2 is said to be the cut-off frequency.

This means that for LPDA, the phase centre shifts from one end to the other according to the shift in frequency from lowest to highest.

It is to be noted here that this region receives very small voltage from the transmission line. This is so because the active region attracts and radiates the maximal radiation.

Thus, this region offers large reactive impedance to the line, so even if a small amount of wave that incidents on it from the active region then it gets reflected in the backward direction.

It is used majorly for high-frequency communication purposes. Also, it is used for TV signal reception and for signal monitoring applications.