Definition: A type of antenna with an opening cut of certain dimensions in a metallic conductor which is excited using a two-wire transmission line or coaxial cable is known as a slot antenna. These antennas operate in the frequency ranging between 300 MHz to 30 GHz.

It is generally formed by making an elongated slot cut of about λ/2 length and width very less than λ/2 in a metallic conductive sheet. The excitation to the slot is provided at the centre or off the centre.

Slot antennas operate on the principle that whenever a high-frequency field is present across the slot in a metallic sheet, then energy is radiated.

This is the reason when a slot is cut from the surface of the conductive plate then on energizing the slot, the electromagnetic wave is radiated thus acts as an antenna. Due to the presence of a slot, it is named as a slot antenna.

Thus we can say a conductive surface with a slot of particular dimensions is referred as a slot antenna.

Suppose we have a rectangular conductive sheet over which a horizontal slot is cut having length λ/2 and the breadth extremely less than λ/2, let it be ω.

Babinet proposed that two complementary screens generate a similar diffraction pattern. This is known as Babinet’s principle. According to this principle, the structure of the slot antenna and the half-wave dipole structure cut out from the conducting sheet are complementary to each other. 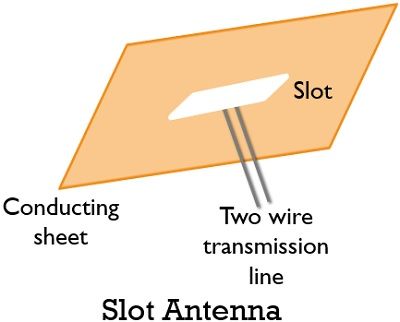 So, the region which is cut from the conducting sheet is the half-wave dipole that acts as the slot’s complementary antenna, known as a complementary dipole antenna. 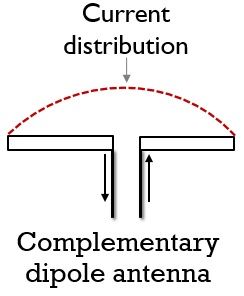 The figure below represents the slot and complementary dipole antenna:

Here the external feed which is used as the excitation is provided at the center of the slot using the two-wire transmission line.

The impedance of the slot antenna relies on the feed point position. As impedance shows reduction with the shift of feed point towards the edge from the centre.

Annular slots are the slots of circular shapes that are present on the metallic sheet. The ease of construction and analysis highly facilitates making rectangular or circular slots.

A narrow beam of radiation is produced by the annular slot antenna.

In slotted waveguide antenna multiple slots are present in a waveguide forming a group of antennas. 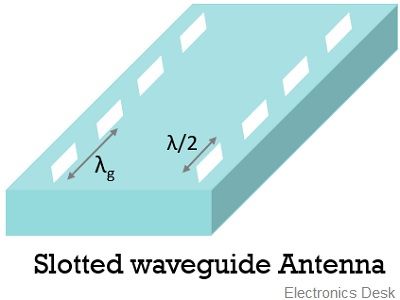 The separation between each slot is such that there exists half guide wavelength distance between center of each adjacent slot. These slots are cut on the two sides of the waveguide which is separated by the central line.

It is noteworthy here that the guide wavelength is greater than the free-space wavelength.

Impedance of the Slot Antenna

The relation between the terminal impedance of slot, Zs and dipole Zd is given as:

Thus on substituting, we will get

For a half-wave dipole antenna

Then the terminal impedance of slot antenna will be:

On simplifying, we will have

Arrays of slot antenna find applications in aircraft. As the metallic surface of the aircraft allows the formation of the slot directly on it. These are also used in mobile radar systems.