Thus, the relationship is given as:

This implies that the gain of the antenna is the product of directivity and efficiency of the antenna. Directivity is different for different types of antennas. Generally, for short dipole, its value is 1.76 dB while for large dish antenna it is around 50 dB.

It is also called maximum directive gain and is denoted by D.

Thus, it can be written as:

So, in terms of power density, directivity is defined as the ratio of maximum power density to the average power density over a sphere where both are measured in the far-field of the test antenna.

Directivity is a dimensionless quantity whose value is generally equal to or greater than 1.

Hence, we can write it as:

So, when the intensity of emitted radiation is the same then,

As we know, that to get the average radiation intensity, total radiated power must be divided by 4π steradian.

This means the directivity is associated with maximal values of the antenna.

Directivity is a crucial factor associated with antenna due to the reason that for transmitting antennas some systems specifically radiate in a particular direction by forming narrow-angle. While for receiving antenna, the directivity is checked as its ability to gather the radiated energy from a specific direction. This shows that it is concerned with the level of directivity possessed by the radiation pattern of the antenna.

An antenna which radiates in almost all the directions, where the only variation exists in the intensity of the radiation in the various directions has directivity of 0 or 1 dB. These antennas are known as an omnidirectional antenna. But in case of this antenna, the radiated beam propagates to shorter distances.

Now, as we have discussed in this same section that an antenna which possesses low directivity also finds major applications. This is so because high antenna directivity is not suitable in all applications. So, the first question arises then where it is used? 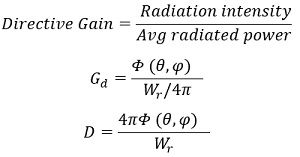 When the lossless isotropic antenna is assumed then, the directive gain is equal to directivity.

: k is the radiation efficiency factor whose value is 1 for the isotropic antenna.