Definition: A type of antenna that is designed to collimate the incident divergent energy in order to convert it into plane waves using proper lens material is known as Lens Antenna. It is a microwave antenna that uses the principle of refraction utilized by the optical lens for light in order to re-radiate the received energy in the desired direction.

The operating frequency range offered by lens antenna begins at 1 GHz but is majorly used above 3 GHz. This means these are designed to be operated at very high frequency.

Lens antenna is regarded as a radiator which operates on collimated action of optical lens. Its operation is similar to reflector antennas.

In the previous article, we have discussed the reflector antenna that allows the energy falling on its surface to collimate in the desired direction. Thus, results in converting the spherical waves into plane waves.

This causes an increase in the directive gain offered by the antenna arrangement.

Similar to a parabolic reflector, a lens antenna is designed to collimate the incident energy which is diverging in nature, in the desired direction. This prevents the undesired spreading of the energy thereby improving the efficiency.

Lens antennas use the principle of the converging lens in order to collimate the energy that incident on it. We are familiar with how a simple optical lens performs collimating action.

We have seen in a parabolic reflector that the energy emitted from the feed element which is present at the focus of the reflector when reaches its surface then it converts the spherically radiated microwaves into plane waves. Hence improves the directivity.

In a similar way in case of lens antenna, the point source acts as the feed that emits the microwave energy towards the surface of the optical lens. This optical surface forces the radiated spherical wavefronts to get changed into collimated one.

It is noteworthy here that in general practice the collimating lens is made of dielectric material which possesses the finite value of dielectric constant. But these can also be constructed with materials that exhibit less than unity refractive index at radio frequencies.

It somewhat displays reciprocity theorem thus is used at the transmitting as well as receiving ends.

In the previous section, we have discussed the principle of operation of the lens antenna. Let us now see, how actually it is designed for transmission and reception of signals in the microwave frequency range.

We all must be aware that from the optical point of view, light when falls on the surface of the lens then it bends due to refraction and the way of bending of light energy depends on the curvature as well as material from which the lens is made.

So, when the feed antenna (generally horn or dipole antenna) is present at the focal point (present on the left-hand side) of the lens then the spherical wavefront emerging from the source which is diverging in nature incident in the surface of lens antenna.

Thus, after incidence when the rays pass through it then the diverging rays collimate due to refraction and is converted into plane wavefronts. Hence, the parallel rays are obtained at the right-hand side of the optical lens. In this way, the signal from a lens antenna using a feed element is transmitted.

In a similar way, if this antenna is made of dielectric material, then the radio-frequency electromagnetic waves are collimated in a similar way and are transmitted further.

Here parallel rays that incident on the surface of the converging lens, converge on the left-hand side of the lens at the focal point due to refraction mechanism. Thus, this operation is utilized when it is used for receiving mode.

This shows that it follows the principle of reciprocity theorem.

An important point to be noted here is that to achieve better focusing properties at radio frequencies, the medium should have a refractive index less than unity. This leads to provide straight wavefronts even when the refractive index of the material is high or low.

The two major classifications of lens antennas are as follows:

The reason behind this is that, due to the medium of the lens, the electrical path length is increased and the wave undergoes retardation.

The figure below represents the action of the dielectric lens: 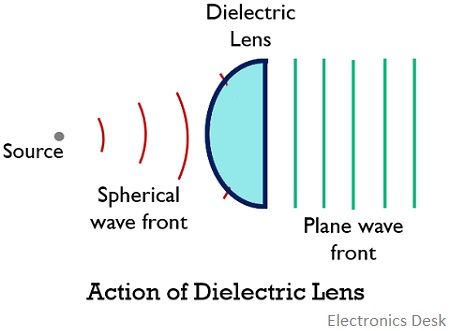 These are further classified into two categories:

The above classification is based on the type of dielectric material (i.e., either metallic or non-metallic) used for construction.

It is also known as the E-plane metal plate antenna. The figure below shows the fast lens antenna:

The advantages are as follows:

The disadvantages are stated below:

These are wideband antennas that are referred as microwave antennas and are suitable for frequency above 3 GHz. The dielectric lens antennas are frequency sensitive thus this specific type is not used over the wide frequency range.