A type of reflector which has a reflecting surface having the shape of a paraboloid that is used to collect and re-radiated the electromagnetic energy is known as Parabolic Reflector. It is regarded as the simplest and popular form of reflector antenna.

These are known as microwave antennas as exhibit a wide range of use at microwave frequencies in terms of communication.

The operating range offered by it is generally above 1 MHz. Thus, shows suitability in radio and wireless applications.

As this antenna possesses the shape of a paraboloid thus exhibits the properties of a parabola.

We have already discussed in our previous article of reflector antenna that energy from the feed element when strikes the polished surface then it is re-radiated in a particular direction.

The parabolic reflector is sometimes referred as a dish antenna and its distinctive shape offers high gain and narrow bandwidth.

It is regarded as a reflective device that is used both at transmitting as well as receiving antenna. 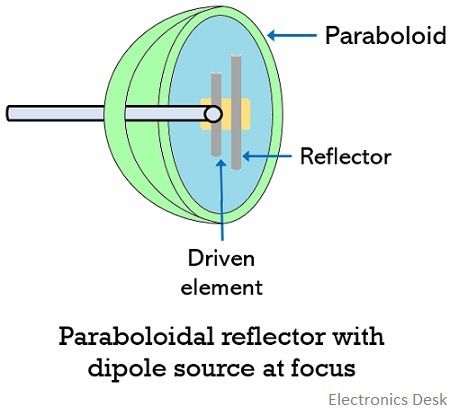 More simply, it can be said that, at the transmitting end, the signal from the feed is focused towards the parabola. This implies that wave emerging from the feed strikes the parabolic reflector and from here it is further reflected as collimated wavefront in the desired direction.

While at the receiving end, the electromagnetic wave from the transmitting antenna when reaches the reflector antenna, then is converted into the spherical wave and is further directed to change to electrical form which is required at the respective circuit.

What is a parabola?

A parabola is regarded as a two-dimensional plane curve. While a reflector antenna must possess a three-dimensional structure.

The feed is located at point F, which is referred as the focus.

As the opening of the paraboloid is circular therefore, it produces a beam of the circular cross-section.

Now, let us proceed to understand how a dish antenna basically operates.

So, at the focus when a feed antenna is placed which is nothing but an isotropic source then the waves are emitted from the source.

The radiating element used at the focus is generally dipole or horn antenna, which are used to illuminate the reflecting surface.

Thus, the waves emitted from the source, incident on the surface of the reflector and are further reflected back as a plane wave of circular cross-section. This is represented below: 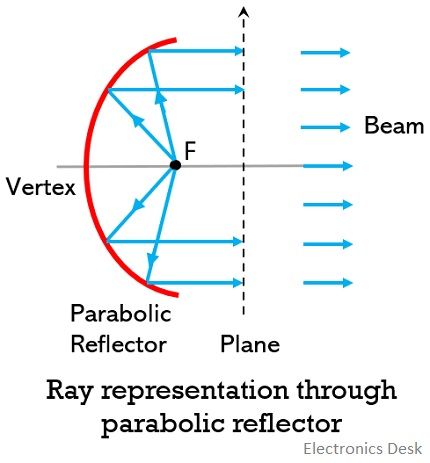 As we can see clearly in the above figure that the waves from the feed incidents at different points on the parabolic surface. However, all the waves after reflection are collimated and the plane waves travel in the direction parallel to the axis.

Thus, all the collimated waves from the reflecting surface have equal path length i.e., twice the focal length with a similar phase.

This will lead to provide very high radiation in the direction of the parabolic axis. In this way, the spherical wave from the feed is converted into a plane wave.

We have already discussed that reflector helps to eliminate the direct radiation from the source. But while designing a parabolic reflector the point of focus where the feed is present is to be decided carefully.

This is so because if: 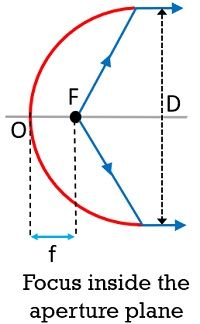 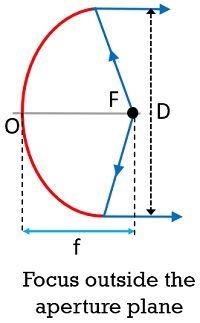 Now, the question arises, where should be the focus present in the arrangement?

So, basically, the arrangement that provides the highest gain from the reflecting surface is the one in which focus is present in the plane of the aperture. 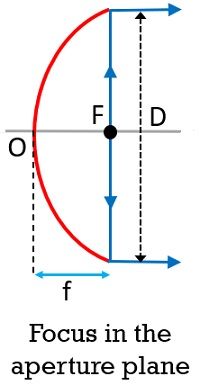 For the focal point in the plane of aperture, the focal length offered by the geometry of parabola is one-fourth of the diameter of the aperture.

A noteworthy point over here is that practically, there is not at all complete uniformity in the illumination. This is so because, it relies on the method through which the paraboloid is fed thus there is generally, tapering towards the outside edge.

The figure shown below represents the radiation pattern of a paraboloid: 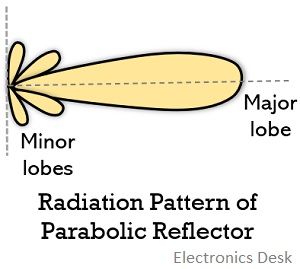 It is clear from the figure that the beam results in sharp major lobe with several side lobes. Also, the 3D orientation of the major lobe in the axial direction looks like a fat cigar.

It is to be noted here that some disadvantages are also associated with the primary element present in the path of the reflected wave. These are as follows:

Thus, to overcome these effects, sometimes only a part of the paraboloid is utilized and the primary antenna is displaced at little. This is known as offset feed.

The high directive gain offered by these antennas makes it suitable for various applications like:

Thus, this is all about the parabolic reflector antenna.