A type of reflector consisting of either two or three flat sheets that are conductive in nature, intersecting at 90° forming a corner, that allows the reflection of incoming waves is known as a Corner Reflector. The type of reflecting sheets that form corner offers high directive gain thus highly facilitates its use in antenna systems.

These reflectors exhibit simple structure and offer simplicity in design.

In our previous article, we have discussed that reflectors are used to collect and re-radiate the received electromagnetic energy in the desired direction. This leads to improvement in directive gain offered by the antenna.

This type of reflector is nothing but a modified form of the flat reflector. The reason behind saying this is that it uses flat sheets or conducting sheets to form corner reflectors just be joining the sheets at a particular angle.

The angle forming the corner with two adjacent sheets is known as included angle and is denoted as α. And the most preferable value of α to form corner reflector is 90°.

It uses the law of optics that implies, the signal after reflection travels in the same direction from which it was received.

More specifically, the principle of its operation is such that when an electromagnetic wave strikes the corner reflector then the incoming ray gets reflected from each electrically conductive surface once.

Thus, the direction of propagation of the waves gets reversed.

It reflects the wave in the direction from where these are originated and are regarded as a passive device.

We have already discussed in our previous article about reflectors that the major aim behind placing a reflector in an antenna arrangement is to improve its directivity. The corner shaped reflectors facilitate confining the radiated energy within the metallic plate. This provides an improvement in the directivity by reflecting the received energy in the desired direction.

This was proposed by John D Kraus in the year 1938 and is used at very high and ultra-high frequency ranges.

The figure below represents the vertical corner reflector antenna: 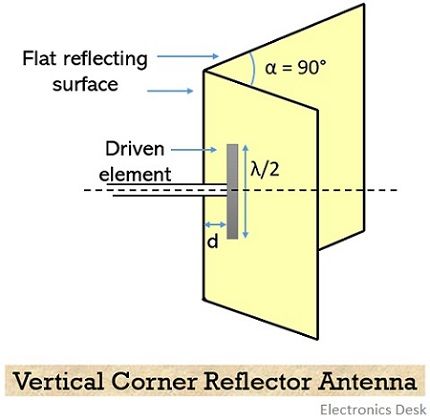 Generally, the driven element in corner reflector antennas is either a half-wave dipole or collinear dipoles and are present in parallel orientation at a certain distance from the vertex of the corner reflector.

However, the use of cylindrical or biconical dipoles, despite using thin wires is preferable here.

The figure below represents the radiation pattern of a vertical corner reflector along the main axis: 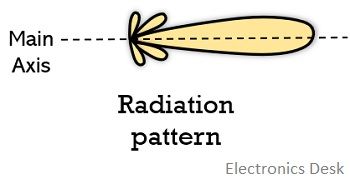 These majorly finds applications in radar systems, to hide the presence of defence vehicles from the enemy radar. This implies it is used for hiding due to its special feature of reflecting the signal exactly in the same direction from which it is coming when α is precisely 90° and these vehicles are constructed with less sharp corners.

These are also used in television signal reception thus finds applications in home antennas. Along with this it is also majorly used in optical communication applications.