It is also known as antenna noise temperature and is not an inherent property of the antenna but is a parameter whose value is affected by the region where the antenna is located and radiating.

Antenna Temperature is denoted as TA.

Basically, when we consider an ideal lossless antenna then despite considering the physical temperature of the device, antenna temperature is the one which is considered in regard to distant regions of the space. Generally, the region in space is that considerable region in the nearer surroundings which shows coupling to the antenna through radiation resistance.

Antenna temperature is a scalar quantity and single-valued function.

What is Radiation Resistance?

Radiation resistance is a virtual resistance and acts as a part of antenna feed point resistance. It is associated with the feed point of the antenna where some electrical resistance exists through which emission of electromagnetic radiation takes place.

As in electrical circuits, resistance is considered as an opposition which the conducting material offers to the flow of alternating current. But as we have said in the beginning itself that it is a virtual resistance and corresponds to the loss of energy by the antenna in the form of radio waves. Thus, it is given the name radiation resistance.

The two crucial factors on which the radiation resistance of antenna depends are the geometry of the antenna and the frequency of operation of the antenna.

The figure given below represents a circuit with a resistor having value R at a specific temperature Tr:

So, for the above-given arrangement, the noise-power per-unit bandwidth present at the terminal resistance R, at the given temperature will be:

Here, p represents the power per unit bandwidth and its unit is W/Hz,

Tr corresponds to the absolute temperature of the resistor in kelvin. 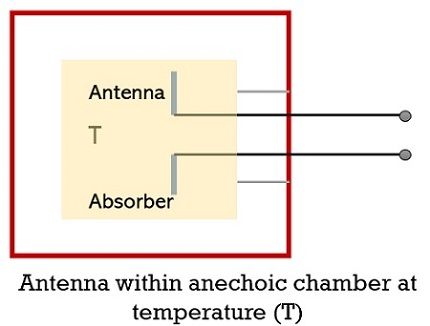 So, if Tr is equivalent to Tc, then the power per unit bandwidth will be the same as that in the case of the one which is present at the resistor terminals i.e., kTr. This is so because in both cases, an equal amount of impedance is offered by the terminals.

But a noteworthy point over here is that the noise power will be different in case the temperature of the surrounding (T) changes. 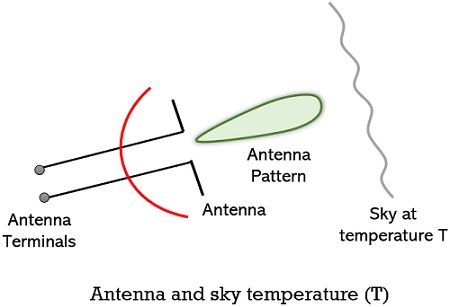 So, in this case also, if Ts is equivalent to Tr then the noise power per unit bandwidth will also be the same as the initial case. Thus, we can say, that the noise temperature of the antenna TA is nothing but Ts as here the complete antenna pattern is subjected to the sky temperature Ts.

To measure the distant temperature, the use of an antenna is required which acts as a passive remote sensing device. And such antennas are known as radio telescopes.

In case of no difference,

Hence, for the remote sensing device i.e., radio telescope the power per unit bandwidth will be:

Here, P denotes the total power in watts and B corresponds to the bandwidth in Hz.

Here the two consecutive above-given equations represent overall received power. Thus, on equating the two we will get:

Thus, the flux density S will be given as:

The antenna temperature from the above equation will be:

Where the unit of TA is K.

So, from the above analysis, we can conclude that the noise (antenna) temperature is crucially dependent on the power produced per unit bandwidth along with the effective aperture of the antenna.