Antenna Impedance is related to the electric and magnetic fields and is defined at the terminal point of the antenna system as the ratio of voltage or current across the particular terminal.

This is so because an antenna can be either transmitting or receiving one. But to transmit the maximum available power or to receive the actually transmitted power, impedance plays a crucial role and must be necessarily known.

We know that antenna is designed to integrate the electric field and magnetic field so as to generate voltage and current that actuates the electrical device.

So, in order to have the required field and circuit quantities, the field to circuit transition with respect to impedance must be properly considered.

Basically, the antenna impedance shows dependency on factors like operating frequency, feeding method, geometrical orientation along with the effects of surrounding objects.

The impedance of the antenna is in terms of electric and magnetic fields are defined as the ratio of the electric field to that of the magnetic field at the specific points.

There are various methods that are used for calculating the impedance of the antenna are:

However, mostly boundary value method is used for impedance calculation.

So, by the use of any above-given method when the actually radiated power flow is calculated then by using basic relations, self and mutual impedances are determined.

As we have already discussed that may it be transmitting or receiving one, but the transmission line must be such that it must provide the maximal amount of power from transmitter to antenna or it must extract maximal energy from the antenna to provide it to the receiver.

Thus, the terminal impedance is of great significance.

The figure below represents the impedance by the antenna to the transmission line using the two-terminal network: 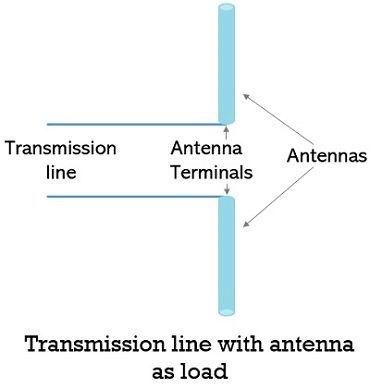 Here the entire system is replaced by equivalent impedance ZL as shown below:

So, when it is considered that no heat loss is associated with it and it is placed away from the ground and other objects, then the terminal impedance (ZL) will be equal to self impedance (Z11) of the antenna. In this case, the self impedance will be given as:

X11 represents the self reactance

In case of thin linear half-wave centre fed antenna, it is given as:

For the same configuration, when it is considered that it is placed near any object then the terminal impedance will get modified. This is so because now there will be some current in the nearby active elements that will lead to cause the mutual inductance.

Thus, self impedance is the input impedance of the antenna in the absence of all other elements.

Thus, we can write the mutual impedance as:

This signifies induced voltage in circuit 1(primary, open) due to the current flowing in closed-loop circuit 2(secondary, closed).

:V12 represents the voltage in circuit 1 due to current in circuit 2.

Now, consider the reverse condition as shown below:

Here, the current flowing in circuit 1 induces a voltage in circuit 2. Thus, for this, circuit 1 will act as a primary closed circuit while circuit 2 will be secondary but open-circuited.

Hence, the mutual impedance will be:

: V21 represents the voltage in circuit 2 due to the current flowing in circuit 1.

According to reciprocity theorem, the two mutual impedances are equal,

In mutual impedance, it is said that the magnitude of the induced current due to coupling is maximum when the circuits are closely placed in parallel orientation and this reduces with the increase in distance of separation.