Remote Sensing is defined as an art or science of observing and gathering information about any object, scene, or phenomenon which exists at a remote location from the point of observation. The word ‘remote’ is used in reference to the existence of something (object of interest) at a distant location or the one which is not present in physical contact.

In the early 1960s, the first time ever, the term remote sensing was coined.

It is an instrument-based technique where the device that performs observation from a distant location is called a remote sensor or simply a sensor which is a satellite or aircraft in space. One of the key elements of this remote sensing technique is electromagnetic radiation.

We know that for remote sensing to take place a device like satellite or aircraft must be present at the remote location. Now the question arises- how a device placed at such a large distance gathers information of a region or the object on the surface of the earth?

Basically, for the purpose of gathering information, the remote sensors in space send energy towards the object of interest. The energy emitted from the satellite can be light energy or another type of EMW or acoustic energy that when reflects backs from the object or any specific region tells the characteristics of the same.

The human eye is considered to be one of the most common as well as efficient remote sensors. However, we are also aware of the fact that there is some permissible range of vision offered by the human eye and beyond which clarity of viewing degrades.

Also, in photographic systems, a conventional camera is used as a remote sensor, because we know to capture any image the camera is focused on the desired object from some specific distance. Here the light energy emitted from the camera when reaches the object gets reflected back from the object towards the camera.
The camera has light energy sensitive film that detects the incoming energy and once the reflected light is exposed on the film then this produces a latent image. This film is then developed properly at the laboratory and a proper photograph is generated.

Thus, we may conclude that both the human eye and photographic systems use the same principle of observation and recording and are known to give response to a minute portion of the received reflected energy. However, on the other side, the remote sensors used in today’s time are designed to capture quite a wide range of reflected radiations that are transmitted by the objects or surfaces at more than 0-kelvin temperature.

We all are aware of the fact that when electromagnetic radiation is emitted from an aircraft or satellite then each individual object on the surface of the earth reflects variable energy in multiple bands of the spectrum. Now, the question arises that – if the light is of the same frequency or wavelength then why it shows different characteristics after getting reflected from different objects?

So, basically, the amount of energy that gets reflected from any object present on the surface of the earth depends on the properties of the material along with the properties of incident energy (like incident angle, intensity, wavelength, etc.). Hence in the detection and discrimination of the various objects or the surface regarding remote sensing, the individuality of the reflected electromagnetic energy plays a crucial role.

Any device that captures reflected electromagnetic radiation coming from an object or surface is called a sensor and the vehicle on which the device is carried is known as a platform. The sensors are cameras or scanners while devices like satellites or aircraft act as platforms.

Remote Sensing is a process that determines the surface parameters by measuring the characteristics of electromagnetic radiations coming from the surface of the earth. Basically, the object on the earth or the specific region under test itself is composed of various materials.
So, remote sensing is used to detect and measure the electromagnetic energy that gets reflected from the test object. The reflected radiation when received by the sensor helps it to identify the characteristics such as type or class of objects, substance or spatial distribution of the region, etc.

The figure below shows the schematic representation of the remote sensing technique: 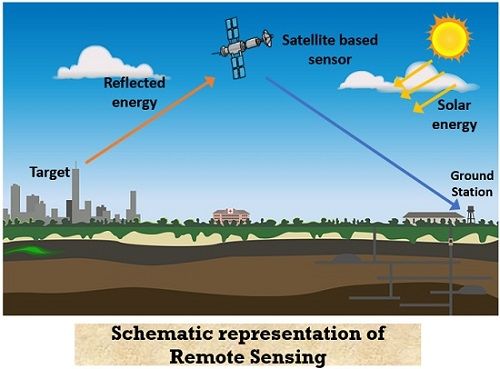 A body (satellite) located at the space orbiting earth is situated at such a great height that it can easily capture the fine spatial regions on the earth’s surface as well as large objects.

Stages of Operation in Remote Sensing

Consider the figure shown below in order to understand the various stages involved in remote sensing data acquisition: 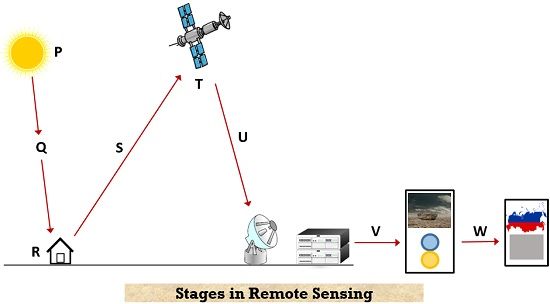 Emission of electromagnetic energy from the source (P): The sun is considered to be an important source of energy for remote sensing. Sometimes devices that can generate artificial energy are mounted on the platform, for example, flashguns or energy beams.

Transmission of energy from source to the surface of the earth (Q): When the energy is emitted by the source then during transmission, absorption, and scattering of the electromagnetic radiation take place. Basically, the energy from the source propagates with the speed of light.

Interaction of energy with the object or surface of earth (R): The energy emitted from the source after encountering multiple obstacles interacts with the object of interest. And as we have already discussed that various objects behave non-uniformly to the transmitted radiation thus, it is always necessary to properly observe the characteristic behavior of the energy.

Transmission of energy from object to sensor (S): The energy from the source after getting reflected from the object re-enters into the atmospheric region. The constituents of the atmosphere such as water molecules, various gases modify the original energy.

Energy recording by the sensor (T): For the purpose of recording the reflected energy coming from the object photographic or non-photographic plates are used by the sensors. The sensors are present in the polar sun-synchronous orbit present at a height of 700 to 900 km. The satellites existing in this orbit are the remote sensing series of satellites. While the telecommunications and weather monitoring satellites are present at the geostationary orbit that exists at an altitude of around 36000 km.
The sensors present in remote sensing satellites are designed in such a way that they are able to detect and collect electromagnetic radiations that get reflected from earth-based objects.

Transmission of the recorded information to the ground station (U): The received data by the sensor is now required to be sent towards the ground station thus, the satellite of the sensor electronically sends the received data to either single or various earth receiving stations on the earth. The quantity of stations receiving the data depends on the type of data being collected.

Information extraction and processing (V): Once the earth station receives the image data then the necessary processing includes removal of errors introduced in the information during data collection. So, after performing necessary corrections information is extracted from the images present in analog or digital form using image processing techniques.

Data Analysis (W): The processed information is lastly analyzed in a proper manner to get the best suitable idea of the characteristics of objects or location under consideration. The properly analyzed information is represented in different layers of thematic maps for the purpose of simplicity in understanding. Along with that to represent the information in tabulated format quantitative measures are also considered.

The classification of remote sensing mainly shows dependency on the type of source that produces the electromagnetic energy. 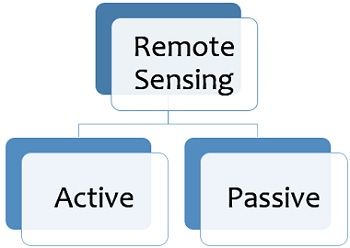 On the basis of the source of electromagnetic radiation production, remote sensing is classified as active and passive.

Passive Remote Sensing: The type of remote sensing that makes use of a natural source of energy i.e., the sun in order to produce electromagnetic radiation and perform remote sensing is called passive remote sensing. Generally, solar energy is used in various remote sensing applications i.e., the passive mode of operation. The solar energy gets reflected by the targets at a specific wavelength is sensed by the sensors.
The strength of the signal received in this case interacts with the atmosphere in an efficient manner and thus no significant loss in signal strength is noticed. This is similar to an analogy like taking an image from an ordinary camera.