We all are aware of the basic law of Gravitation proposed by Newton that anything that is thrown upwards comes back to the ground due to the gravitational pull of the earth. In a similar way when a satellite is vertically launched from the surface of earth then due to gravity it will also fall back to the ground.

Basically, at an extremely high speed of around 42,075 km/hr, the gravitational pull of the earth vanishes which constantly exists at lower speeds. Thus, with such a high launch speed, the satellite can reach space. 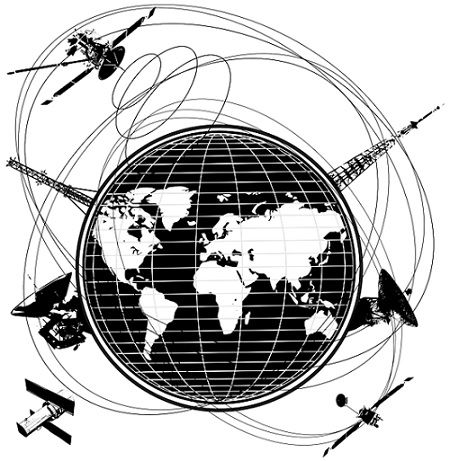 Another noteworthy point over here is that closer the orbit of the satellite more the gravitational pull it will experience. Thus, in the case of lower orbits, the satellite must possess high velocity.

We have recently discussed that the orbital position of the satellite is maintained due to the balancing between the centripetal force of the satellite and the gravitational attraction of the earth. However, you must note here that there are four crucial factors on which this balancing depends which are as follows:

The satellite orbits are nothing but the path followed by satellite while revolving around the earth and these are generally classified into two categories: 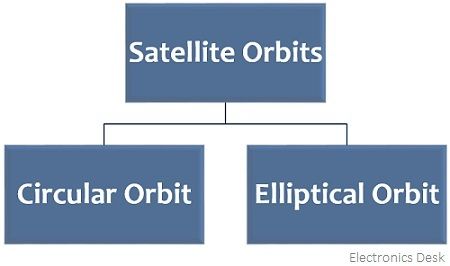 The figure below represents the circular orbital shape of the satellite: 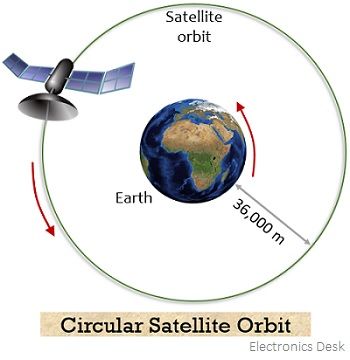 Also, the elliptical satellite orbit is given as: 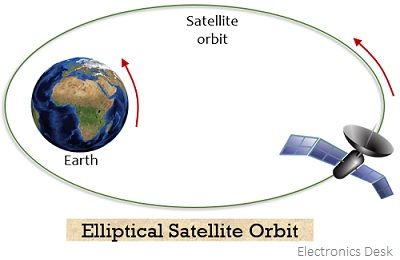 As it is clear from the above figure that the radius of the elliptical orbit is variable but that of a circular orbit is constant. And the behavior of the satellites in the orbit follows Kepler’s law of planetary motion.

The circular orbit is further classified into 3 categories which are as follows:

These satellites suit uses mainly in the field of communication because the ground-based antennas easily support effective communication without needing costly equipment. 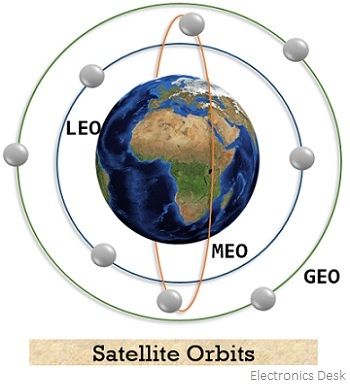 Medium Earth Orbit (MEO): This earth orbit region lies below GEO but above LEO and possesses an altitude between 2000 to 36000 km. It is also given the name intermediate circular orbit. The most common altitude of this orbit is 20,200 km and possesses an orbital period of about 2 to 24 hours.

These are mostly used for the purpose of navigation, communication, and monitoring, etc. The satellites that operate in this orbit are generally Galileo, GPS, Telstar, etc.

LEO is a very commonly used orbit due to the reason that as GEO exists on the earth’s equator thus satellites have to move in a specific path. But this is not the case with LEO as their plane can be titled. This provides more available routes for the movement of satellites in the orbit.

Satellites in LEO exhibit an orbital period of around 90 minutes and finds applications like satellite imaging. Basically, the close presence of the orbit from the surface of the earth allows the satellites to capture images of high resolution. But these are not suitable for telecommunication applications as they move with high speed around the earth and this makes their tracking quite difficult from stations present at the earth’s surface. Generally, satellite constellation is formed by LEO satellites.

Station keeping is basically a technique used to overcome orbital drift. Orbital drift may arise due to various factors. Like the sun and moon hinder the position of the satellite due to gravitational pull applied by them. Also, the earth possesses the shape of an oblate spheroid rather than a perfect sphere thus it offers inconsistent gravitational field at different points on the earth’s surface. This results in orbital drift and this requires periodic satellite orbit adjustment. This orbital adjustment is called station keeping.