Satellite links allow us to enable communication over large distances.

The operation can be understood as Uplink denotes a link, up from earth station to satellite. When uplink is taking place then such satellite communication is referred to as Upload. 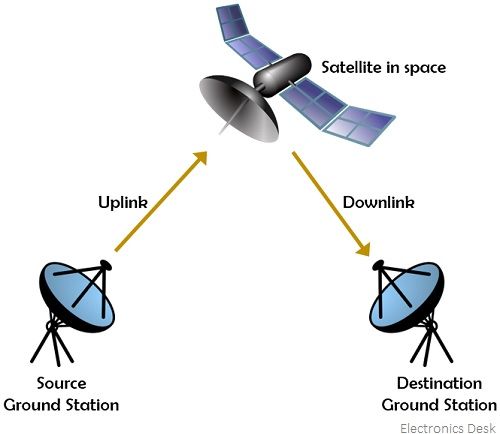 The frequency selection in satellite communication is a crucial aspect. A noteworthy point over here is that the uplink frequency should always be more than the downlink frequency.

The three factors for frequency selection are as follows:

The design of the Uplink is quite easy. Here the noise at the satellite receiver is not considered and transmitters of large physical size can be placed at the earth station. When we consider very small aperture terminals (VSAT) at the earth station, that is EIRP limited then here the optimization of the uplink carrier to noise power is to be carefully done.

A noteworthy point over here is when we transmit a signal of significantly high power from the ground then the low sensitivity of the satellite receiver can be easily compensated by it.

How does a satellite uplink work?

The figure below shows the illustration of the elements involved in satellite uplink:

Once the microwave frequency signal is achieved at the output of the upconverter then with the use of a power amplifier, like klystron or TWTA, the signal amplification is done after noise removal in order to raise the total effective output power. Lastly, the feed releases the signal and the dish focuses it in the direction of the satellite. Hence, by the use of a dish, the feed horn sends the signal to the satellite.

In this way, the signal from the earth station is relayed to the satellite.

Equation for [C/N0] of Satellite Uplink

In our previous content on satellite link budget we have discussed that the equation for the carrier to noise power density is given as:

To consider the condition of uplink, subscript U must be added to the above equation. Thus we will get,

[G/T]U is for the satellite receiver.

The frequency-dependent losses such as free-space loss and other losses should be calculated for uplink frequency.

It is defined as the flux density needed for the saturation of TWTA at the receiving end. It is a specific quantity of link budget calculation and its known values help to calculate EIRP at the earth station.

Consider, the equation given below, showing the relationship between EIRP and flux density.

In decibels, we can write the above equation as:

But FSL in decibels is given as:

On putting the above value in the equation of flux density,

Rewriting the equation of flux density, with substituting the above equations, we will get,

Thus, [EIRP] will be given as:

The above equation signifies, that only spreading loss i.e., FSL is present while transmission. But, we know that there exist some other losses, thus:

Thus, we can write it as:

It is specified according to the saturation level of the single carrier, given as:

This signifies that input back-off is achieved by reducing the EIRP of the earth station towards the satellite transponder.

The above equation can be modified as:

The above equation signifies the ratio of carrier to noise density after input back-off.