Definition: Klystrons are a special type of vacuum tubes that find applications as amplifiers and oscillators at microwave frequencies. Its principle of operation is velocity modulation. Thus the device used for amplifying microwave signals is known as Two-cavity Klystron.

In the year 1937, American engineers Russell and Sigurd Varian developed klystrons. Basically, the operating principle of Klystron is such that the kinetic energy of a moving electron beam is utilized for amplifying and generating microwave signals. TWT i.e., Travelling Wave Tubes are also used for amplification of RF signals and have similar applications as klystrons. But in TWT, a continuous interaction is maintained between the field and electron beam. While in klystrons interaction between the two is allowed to occur only at the cavities of the structure.

Klystrons are majorly classified as:

Here in this article, we will discuss the construction and working of the two-cavity klystron amplifier.

As we have already discussed in the introduction that Klystron is based on the principle of velocity modulation. Thus two-cavity klystron amplifier utilizes the kinetic energy of moving electron beam for signal amplification.

The figure below represents the structure of a two-cavity klystron:

As we can see that the above figure consists of 2 cavities namely the buncher cavity and catcher cavity. The RF signal to be amplified is provided at the buncher cavity. The electron gun comprises cathode, heating element and anode. The electron beam is produced by the cathode by making use of a heating element and the high positive potential at the anode provides the required acceleration to the electron beam initially. The region between two cavities is known as drift space.

To allow focussed propagation of electron beam inside the tube an external electromagnetic winding is used that generates a longitudinal magnetic field. This is done in order to prevent the spreading of the beam inside the tube. The amplified RF signal is achieved at the catcher cavity. Also, a collector is present near the second cavity that collects the electron bunch.

Initially, electrons are emitted from the electron gun and the anode present in the structure provides the desired acceleration to the beam.

This electric field causes the bunching of electrons as the field applies acceleration and deceleration to the moving electron, according to the polarity of the signal by which the field is generated.

Let us now understand in detail how this increase and decrease in velocity causes bunching of electrons:

The figure below shows the Applegate diagram that represents the bunching of electrons moving with different velocities: 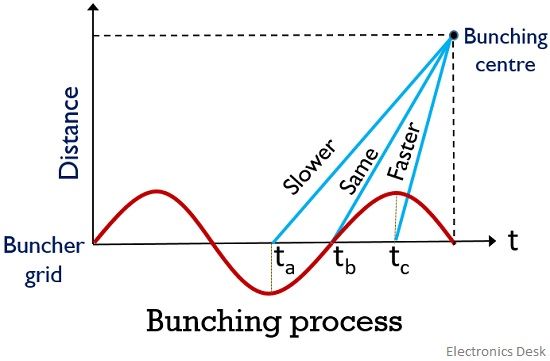 The electron travelling inside the tube under the absence of external fields acts as the bunching centre. Also, the electrons moving due to the influence of the positive half cycle of the signal reaches faster. While the movement due to the negative half cycle is retarded. Thus the figure represents the bunching process at a certain point and at a specific distance inside the tube.