Definition: A Reflex Klystron is a specialized low-power vacuum tube used to produce oscillations at microwave frequency. Its principle of operation is velocity and current modulation.

Klystrons are basically specialized tubes used as amplifiers and oscillators at the microwave frequency range.

We have already discussed Two-cavity Klystron and Travelling Wave Tube in our previous articles. We know a two-cavity klystron acts as an amplifier to provide amplification of RF signals.

So, can that same structure be utilized for generating oscillations?

Basically, a two-cavity klystron can be converted into an oscillator, but some disadvantages are associated with it. As we know to design an oscillator, positive feedback must be provided to the input in a way to have a magnitude of loop gain as unity.
So, if we design a klystron oscillator using a two-cavity klystron then to have a change in oscillating frequency, the resonant frequency of the two-cavities is also required to be changed. Thereby leading to cause difficulty in generating oscillations. Thus to overcome the disadvantage, a reflex klystron having a single cavity was invented to have sustained oscillations at microwave frequency.

Like a two-cavity klystron, a reflex klystron utilizes the phenomenon of velocity and current modulation to produce oscillations. However, there exist variation in constructional structure and the respective applications of the two. A reflex klystron consists of a single cavity that performs the action of both buncher and catcher cavity. As to have oscillations, feedback is needed to be applied at the input which is provided by the oscillator.
While moving electrons undergoes velocity modulation and the repeller applies repulsive forces on them. This leads to the formation of a bunch of electrons. Further, this bunching will lead to cause, current modulation.

We will discuss the working of a reflex klystron in detail but before that let us see how it is constructed.

The basic schematic of a reflex klystron is shown below: 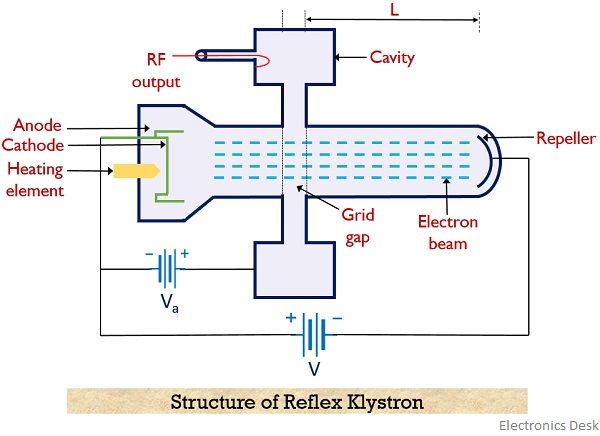 The structure consists of a cathode and focusing anode that combinedly acts as an electron gun for the tube. The cathode emits the electron beam which is focussed inside the tube by the focusing anode. Also, a positive potential is provided as input which sets up an electric field inside the cavity.

A repeller plate that causes backward movement of the electron beam is present at the opposite end of the electron gun. The potential at the repeller is made extremely negative in order to permit repulsion of like charges.

As we have already discussed the fundamental principle of operation of a reflex klystron is velocity and current modulation. So, consider the above figure. 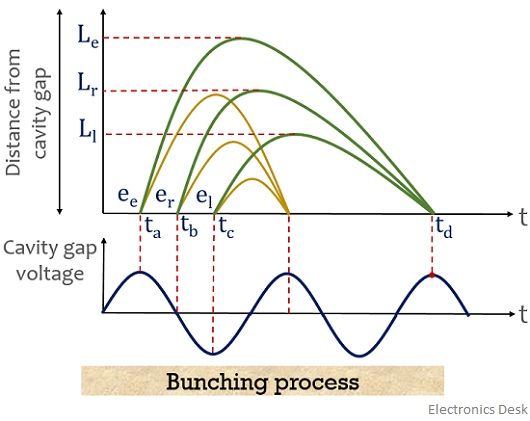 Here the x-axis represents the time and the y-axis shows the distance traveled by the electrons inside the tube.

As we have already discussed that bunching takes place at the time of the return journey of electrons. Thus it is represented in the figure that though ee, er and el, are approaching the repeller with different velocities, yet while returning all of them are bunched at a respective time.