IMPATT is an abbreviation used for IMPact ionization Avalanche Transit-Time. IMPATT diode is a very high power semiconductor device that is utilized for microwave applications.

It is basically used as oscillator and amplifier at microwave frequencies. The operating range of the IMPATT diode lies in the range of 3 to 100 GHz.

Basically it possesses negative resistance characteristic thus acts as an oscillator to generate signals at microwave frequencies. It is a reverse-biased diode and Avalanche condition is the basis of its operation.

The figure here represents the structure of the IMPATT diode: 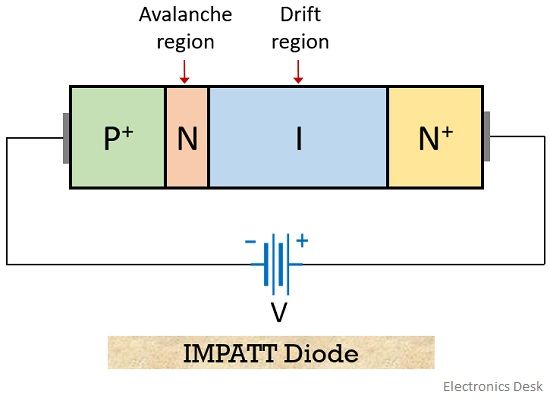 The structure of the IMPATT diode is somewhat similar to the PIN diode. However, it operates on a very high voltage gradient of around 400KV/cm, so as to produce avalanche current.

Generally, materials like GaAs, Si, Ge or InP are used for its construction. However, GaAs is preferred because of its low noise behaviour.

So variation in construction is adopted to produce RF signals at microwave frequencies.

As we have already discussed that these diodes operate on the principle of avalanche breakdown and transit time delay.

So let’s first understand what is Avalanche Condition(breakdown).

An action that causes an abrupt increase in the junction current in reverse biased condition of pn junction diode leading to junction breakdown is known as avalanche breakdown.

We know that in reverse biased condition the width of the depletion region becomes extremely thick. Due to which only minority carriers drift across the junction. In the presence of a high electric field, the mobile charge carriers move with greater velocity.

During their movement, the high-velocity carriers collide with other atoms in the crystal and generates electron-hole pairs. This causes multiplication of charge carriers inside the crystal structure.

Thus the moving charges generate high current inside the device. This is known as avalanche condition or impact ionization and is utilized in IMPATT diodes.

It is to be noted here that the overall external field provided to the diode is the summation of RF ac signal and dc voltage.

The above figure clearly shows the avalanche region and drift space in the structure of the diode.

The moving electrons cause charge multiplication in the presence of a high electric field.

By this time the ac field now starts approaching 0 but due to secondary charge generation, the concentration of electrons in the avalanche region will be extremely high.

This shows a phase shift of 90⁰ now gets generated between the ac input signal and concentration of charge carriers in the avalanche region.

Thus while drifting from avalanche region to anode, the electrons generate high current with a phase opposite to that of the applied ac signal.

During the negative half of the ac signal, even the dc potential is high, still, the reduction in the overall electric field will cause decay in the concentration of carriers present in the avalanche region. Thus the current flowing through it also gets reduced.

Though all the carriers travel unequal distance while approaching the electrode. But the introduced phase-shift due to drifting generates negative resistance.

The figure below represents the negative resistance characteristic of IMPATT diode with respect to transit angle: 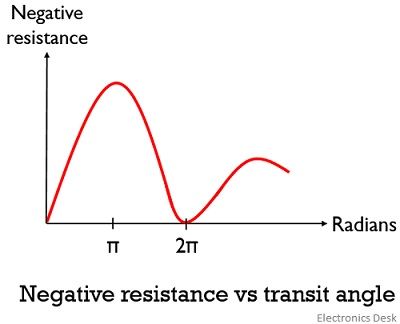 Hence in this way current through an IMPATT diode is generated.