BWO is an abbreviation used for Backward Wave Oscillator. It is a special type of vacuum tube used to produce microwave signals in the range of Terahertz (THz). Backward wave oscillator belongs to the group of Travelling Wave Tubes that generates oscillations at microwave frequencies.

As both BWO and TWT belong to the same group. So, the principle of operation is almost same for both the tubes. However, the two shows some variation regarding their constructional structure and the operating characteristics.

The principle of operation of BWO is such that in order to sustain the oscillations inside the tube, a back-reflected wave from an imperfectly terminated collector is utilized that has a direction opposite to the direction of emergence of the electron beam.

It uses the principle of velocity modulation in order to build oscillations inside the vacuum tube.

Basically in this tube, the wave travels in the opposite direction to the direction of movement of the electron beam. Thus it is known as backward wave oscillator or tube. 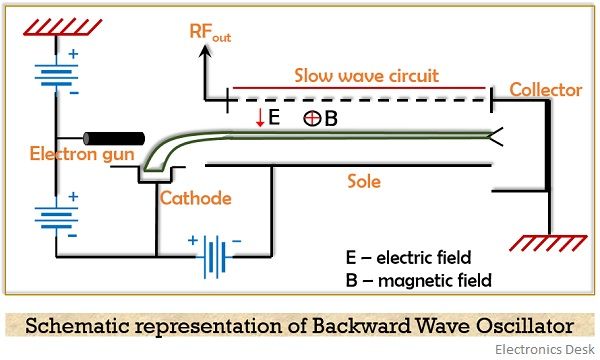 We have already discussed the need for slow-wave structure in our previous article of TWT. So, if you want to know more about it then you can refer the same.

The opposite end of the electron gun consists of a collector region from where the forward wave gets reflected back towards the cathode side and received at the output.

A major component present in TWT is an attenuator which is absent in case of BWO. The reason behind this is that as these are high gain devices and we need to build oscillations inside the tube. So, in order to have wave reflection from the collector, attenuators are not placed inside the tube.

Sometimes a folded waveguide is used to construct BWO because it serves as a slow-wave structure for the oscillator that permits velocity modulation.

Basically the major components that contribute towards the operation of BWO are – electron beam and slow-wave structure.

The constructional detailing of BWO controls various factors like the fixed spacing between different helical paths of the structure causes a limit in bandwidth.

Consider the internal structure of the tube shown above.

When the cathode is heated then a high-velocity electron beam is emitted by the electron gun assembly.

An imperfectly matched collector at the opposite end of the gun generates reflections inside the tube.

Thus inside the tube, all the electrons travel with different velocity as the slow-wave structure permits velocity modulation. This causes bunching of electrons inside it. And the backward wave is received at the RF output terminal present in the structure.

So, this discussion clarifies that in the case of BWO the phase velocity and group velocity are in two opposite directions.

This leads to the generation of continuous feedback wave along the circuit and generation of oscillations without any other external feedback requirement.

So, this shows that just by adjusting the voltage provided to the beam, BWO can be tuned to a large range of frequency.

Therefore, BWO is said to be the modified form of TWT.

This is all about the basic operation of BWO.