Asynchronous Transfer Mode abbreviated as ATM is a technique that allows transmission of information (such as voice, video, and data) in small packets (called cells) of fixed sizes. Each cell size of 53 octets is divided between Header or Overhead (5 octets) and Payload (48 octets). This standard protocol proposed by The International Telecommunication Union – Telecommunications Standardization Sector (ITU – T) and American National Standards Institute (ANSI).

The network in asynchronous transfer mode is generally connection-oriented in nature. It is basically a cell switching and multiplexing technique that is a merger of circuit switching as well as packet switching. Sometimes referred to as a protocol of packet switching.

We are already aware of the fact that when a signal is required to be transmitted from one end to another then there exist various intermediary stages through which the signal must pass in order to reach the other end. So, at the various nodes, the signals propagating through the network undergoes switching. The process by which information is transferred between the two ends is known as Transfer Mode. This is a switching approach.

The word ‘asynchronous’ used here represents that the packets obtained from various users are not required to be transmitted at periodic intervals.

ATM is related to packetized data protocol (packet switching), where digital information is divided into packets of certain lengths where each packet holds address information in header bits. So, after the reception, the header is removed and the actual information stream is obtained. However, it is a little different from the standard in the way that it is designed to provide constant as well as variable bit rate transmission. 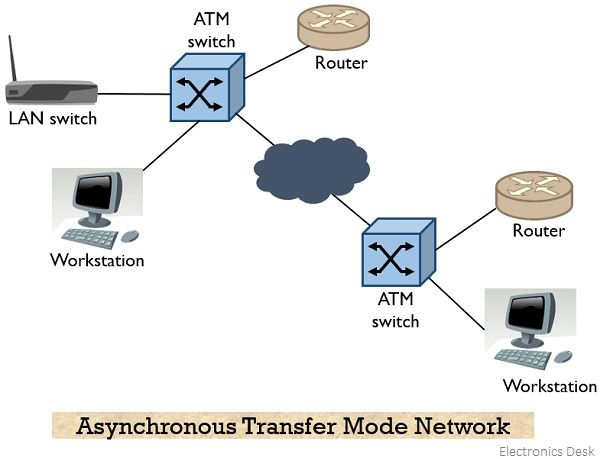 The different data packets of a fixed length that have information content are called cells and these cells can be provided time slots according to the demand.

ATM is utilized by telecommunication networks for the purpose of switching. It is regarded as asynchronous time-division multiplexing where the complete information is divided into various cells of fixed sizes. The connections made in ATM offer easy controllability thus no specific data possess whole sole authorization over the transmission path which is a major drawback of the internet.

ATM is regarded to be more efficient than TDM i.e., time-division multiplexing.

We all know that in the TDM technique, each user is provided a specific time slot and the user can transmit the signal through the channel in that particular slot only as no other user is liable to do so. Moreover, even if the user with the given time slot is not transmitting or has nothing to transmit then the slot will remain empty and automatically be wasted and no other station can perform their respective transmission. This is illustrated below:

As against, in the asynchronous technique, time slots are available but are used according to the demand (i.e., as and when required). Here along with information, there is an address contained in the header of each ATM cell.

It is clearly shown in the above figure that each user is provided a specific time slot. But initially, at the first clock input, user 2 has nothing to send thus, a cell from user 3 has filled that particular slot and is multiplexed together.

In an ATM network, the two crucial devices are ATM switch and endpoints. An ATM switch gets the information cell from the endpoints then further reads it and adds the cell header information. Once this is done, the cell is forwarded towards the destination by the ATM switch. The endpoints can be routers, codecs, workstations containing the network interface adapter.

User-Network Interface (UNI): This interfacing is done between an end-user or subscriber and a specific ATM switch. These are public and private in nature. In private UNI, the connection between an ATM endpoint and a private ATM switch is maintained. While in public UNI, the endpoint or private switch forms a connection with the public switch.

The standard size of an ATM cell is 53 octets. We know 1 octet defines a sequence of 8 bits commonly known as a byte. The figure below shows the structure of an ATM cell:

Here it is clear that out of 53 octets, 5 are for header and 48 octets are for payload.

Header: Within the header section there are various fields that contain information relative to guiding the cell through the network.

The header fields are discussed below:

Payload: The payload consists of 48 octets which are specifically allocated for information (data, image, video, audio).

The layers for asynchronous transfer mode are discussed below:

Physical Layer: It is the lowest layers with two sublayers namely,

The physical medium sublayer handles the line codes in use and the bit timing. In asynchronous transmission as well, bit timing is needed to correctly receive the bitstream. While the transmission convergence sublayer is used for bitstream framing which is required by some types of transmission systems. Basically, this layer packs cells into a single frame and then performs unpacking on reception. Through this layer, the boundaries of the cells can be identified.

Error controlling of the header is also implemented at this sublayer.

ATM Layer: This layer performs multiplexing and demultiplexing of the cells that are obtained from various resources. Basically, for transmission, through this layer, cells are arranged in a sequence and are separated at the receiver. This layer also adds a header to the cells that provide address and channel information.

ATM adaptation layer: This layer is further classified as:

The convergence sublayer is responsible to make the general requirements of multimedia (data, voice, video, image). While the segmentation and reassembly sublayer broke the incoming information into cells (i.e., segments of fixed sizes) and also recombines the outgoing information in its original format.

The bitstreams coming from various media may have different bit rate and burstiness.

Both LAN, as well as WAN, uses ATM. In WAN technology, cells are delivered to long distances. The technology is used in residential broadband networks to achieve high scalability along with this ATM is used in forming infrastructure for telephone networks and private line traffic. Its one of the major applications is LAN emulation, where the services offered by LANs are obtained with the same capabilities through ATM in an efficient manner.