Cyclic Code is known to be a subclass of linear block codes where cyclic shift in the bits of the codeword results in another codeword. It is quite important as it offers easy implementation and thus finds applications in various systems.

Cyclic codes are widely used in satellite communication as the information sent digitally is encoded and decoded using cyclic coding. These are error-correcting codes where the actual information is sent over the channel by combining with the parity bits.

Cyclic codes are known to be a crucial subcategory of linear coding technique because these offers efficient encoding and decoding schemes using a shift register. These are used in error correction as they can check for double or burst errors. Various other important codes like, Reed Solomon, Golay, Hamming, BCH, etc. can be represented using cyclic codes.

Basically, a shift register and a modulo-2 adder are the two crucial elements considered as building blocks of cyclic encoding. Using a shift register, encoding can be efficiently performed. The fundamental elements of shift registers are flip flops (that acts as a storage unit) and input-output. While the other i.e., a binary adder has two inputs and one output.

We have mentioned at the beginning itself that cyclic codes fall under the category of linear block codes. Let us now understand on following which properties a code is said to be of cyclic nature.

According to this property, a linear combination of two codewords must be another codeword.

Suppose we have two codewords Ci and Cj. So, on adding

where this Cp must also be a codeword.

So, according to linearity property, the addition of any of the two given codewords must produce the third codeword. Let’s check 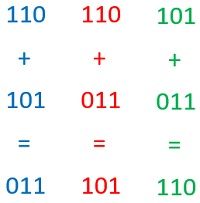 Hence, the given code is linear.

According to this property, after a right or left shift in the bits of codewords the resultant code generated must be another codeword.

Suppose, C is a codeword given as:

Then after cyclic shifts 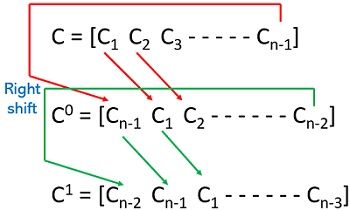 Here we have performed the right cyclic shift that has produced these codewords.

For example, consider again those 3 codewords (110, 101, 011) which we considered for linearity property.

So, according to cyclic shifting property, an either right or left shift in the bits of a codeword must generate another codeword.

110: shifting the bits towards the right will provide 011.

Hence, it is clear that shifting the bits of the codewords gives rise to another codeword thus cyclic shifting property is verified.

Codes that follow both linearity, as well as cyclic shifting, are called cyclic codes.

It is to be noted here that if a codeword has all 0’s then it is called a valid codeword. But at the same time, 0 is regarded as a necessary condition and not a sufficient condition.

We have discussed in linear block codes as well that a linear codeword is generally given as c(n,k). Here n represents the total bits in the codeword and k denotes the message bits. Thus, the parity bits are (n-k). Suppose we are given a code (7,4) then on comparing with general format the codeword will have 7 bits and the actual message bits are 4 while rest 3 are parity bits.

A cyclic codeword is given as:

Then the codeword polynomial will be represented as:

For a given codeword C = [1011], the codeword polynomial will be given as:

In a similar way, for any message codeword m, the message polynomial

Codewords are classified as systematic and non-systematic codewords.

A systematic codeword is one in which the parity bits and message bits are present in separated forms.

But a non-systematic codeword is the one in which the message and parity bits exist in intermixed format and cannot be separated just by noticing the initial and final bits.

Let us now understand the coding and decoding of codewords using cyclic code.

Non-Systematic Cyclic Encoding: Consider the message signal given as:

For non-systematic code, the codeword is given as:

Hence, from the above codeword polynomial, the codeword will be:

From the codeword bits, we can clearly interpret that the encoded codeword contains the message and parity bits in an intermixed pattern. Thus, is a non-systematic codeword and direct determination of message bits is not possible.

So, message polynomial will be:

The equation for determining 7 bits codeword for systematic code is given as:

: P(X) represents the parity polynomial and is given by:

So, to construct the systematic codeword first we have to determined P(X). 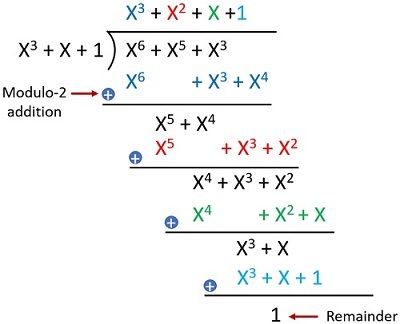 Hence, the codeword for the above code polynomial will be:

So, here the first 3 bits are parity bits and the last four bits are message bits. And we can cross-check that we have considered [1011] as the message bits and parity polynomial remainder was 1 i.e., code [100].

Hence, in this way encoding of non-systematic and systematic codewords is performed.

Syndrome or error involved during transmission is given as:

Since R(X) is a combination of encoded polynomial and error polynomial thus above equation can be written as:

This is so because actually coded bit does not contain error thus syndrome is not required to be calculated.

Now, let us check for error polynomial. So, consider the error table given below where we have assumed a single error in each of the bits of the code: 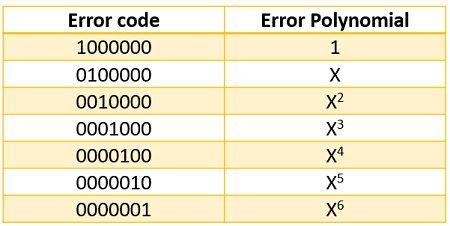 So, now using the syndrome for error polynomial formula:

We will determine, the erroneous bit. Consider the generator polynomial G(X) = X3 + X + 1 and dividing each error polynomial with it. 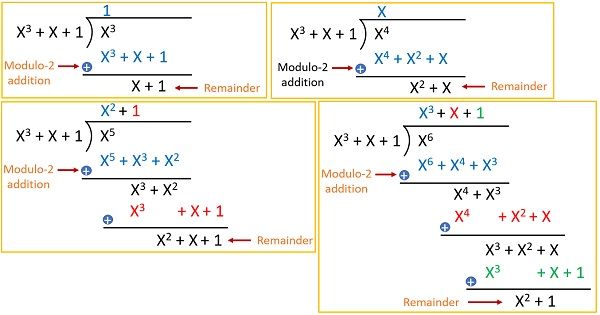 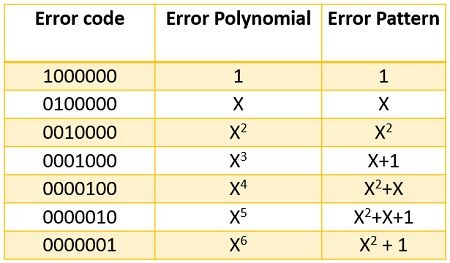 Now, let us check for the syndrome, by dividing the received polynomial R(X) by the generator polynomial G(X). 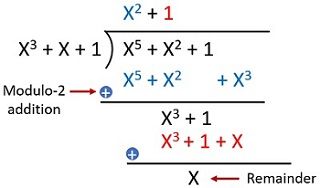 Hence, by using the same approach we can perform encoding and decoding using cyclic code.